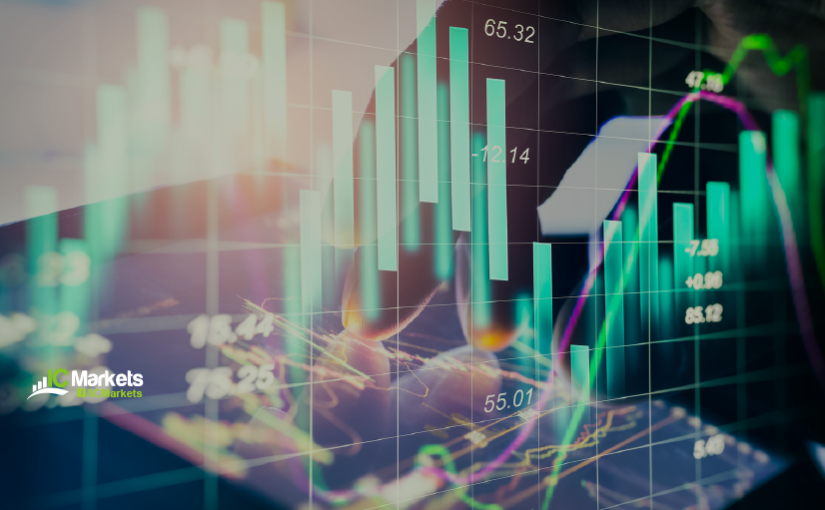 H4 resistance at 1.22/1.2180 (composed of the 1.22 figure, a collection of Fibonacci ratios and an AB=CD bearish formation [red arrows]) is back within touching distance. This is thanks to Tuesday’s advance (on the back of a DXY decline), ahead of a 61.8% H4 Fibonacci retracement ratio at 1.2105 (note the 38.2% and 61.8% Fibonacci retracement points [derived from AB=CD structure] are generally viewed as take-profit objectives out of AB=CD patterns—therefore downside targets have been mostly achieved).

Weekly support at 1.3503 holding (2018 yearly opening value) and price recently registering fresh 2021 highs, in a market trending higher, places long-term buyers in a favourable position. With reference to higher timeframe resistance, the daily chart shows price may have trouble at 1.3763, yet a break signals weekly resistance at 1.3847 is likely on the radar.

In conjunction with higher timeframes, H4 traders will acknowledge Tuesday’s breakout above a bullish pennant pattern, established between the 2021 peak at 1.3745 and a low at 1.3623. Additionally, recent momentum higher, amidst a modest risk-on scenario, overthrew the 1.37 figure. As evident from the H4 timeframe, daily resistance at 1.3763 is the next ceiling on tap.

The trend has remained firmly higher since early 2020.

Higher timeframe support levels to consider are weekly support at 0.7605, a previous Quasimodo resistance, and weekly trend line resistance-turned support, taken from the high 1.1080. Daily support at 0.7655 is also a level in the light.

A closer reading of price action on the H4 chart shows that amid renewed USD softness the AUD/USD reclaimed 0.77+ status on Tuesday, and pierced Monday’s peak at 0.7747. Absorbing offers here swings technical interest towards Quasimodo resistance at 0.7781, located near resistance at 0.7810-0.7791 (holds 0.78 figure within). 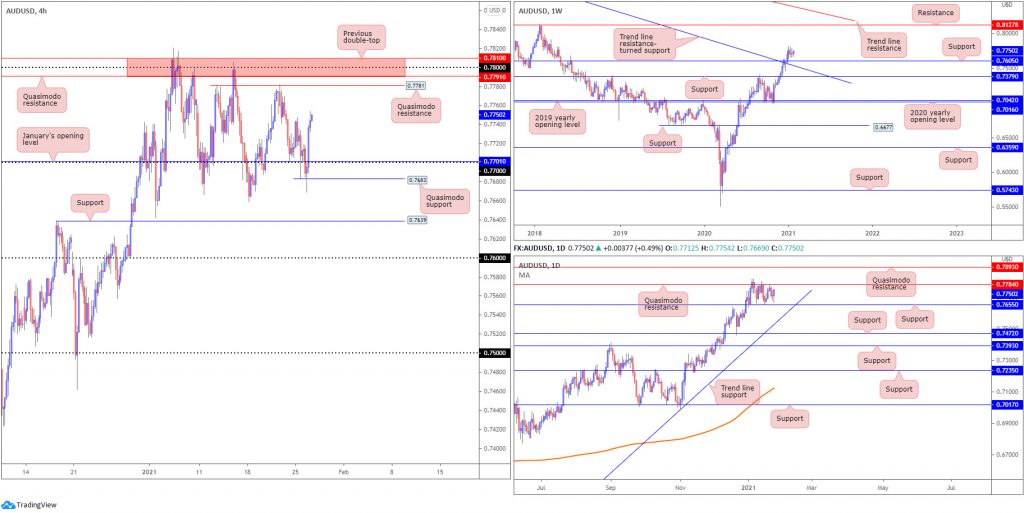 The US dollar elbowed lower against the Japanese yen on Tuesday, following Monday’s H4 Quasimodo rejection at 103.93 (sited just south of the 104 figure). Bearish focus has likely shifted towards Thursday’s low at 103.32, with a decisive break exposing a three-drive bullish pattern at 103.15, closely shadowed by the 103 figure.

103 is an interesting location, merging with the upper boundary of the penetrated declining wedge on the daily timeframe (extended from the high 105.67), January’s opening value at 103.06 and nearby Fibonacci studies at 102.97 and 103.07.

Technical vibes on the higher timeframes show price mixing with the upper edge of a weekly declining wedge (106.94/104.18), which fuses with daily trend line resistance, extended from the high 111.71. A breakout beyond these two barriers, therefore, could be meaningful. 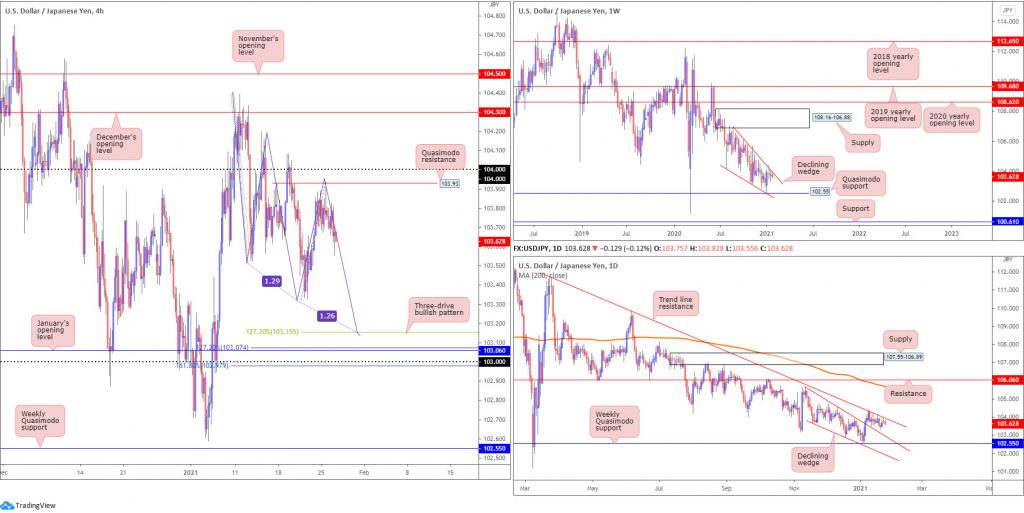 From the weekly timeframe, three back-to-back long-legged doji candles recently took shape just north of the 2018 yearly opening value at 1.2579, shortly after the retest of resistance at 1.2887 in late December (a previous Quasimodo support level). It is important to note long-term flow (trend) has been pointing lower since topping in March (2020).

On the daily timeframe, the upper edge of the declining wedge (1.2957/1.2688) is in play, forming between weekly support and resistance levels mentioned above. A breakout higher, according to the pattern’s rules of engagement, is considered a reversal signal, given it forming within a downtrend.

Leaving the 1.28 figure unchallenged, Tuesday, aided by a broad USD depreciation, spun off into a phase of selling and reclaimed 1.27 and January’s opening value at 1.2713. Any sustained move below 1.27 today may be viewed as a green light to attack the 1.26 figure, a psychological level plotted just north of weekly support mentioned above at 1.2579 (the 2018 yearly opening value).

H4 resistance at 0.8923-0.89 (Quasimodo resistance and psychological resistance) was left unchallenged on Tuesday, as price rotated lower in lockstep with the US dollar index. The 0.8850 region (green) on the H4 provided support on Monday and, therefore, could do so again if retested today. South of 0.8850, technical eyes will note January’s opening value at 0.8824 and the 0.88 figure.

The technical picture from the weekly timeframe reveals the unit has been trending southbound since May 2019, with price action currently retesting the underside of resistance at 0.8905 (converges with the H4 resistance zone mentioned above at 0.8923-0.89).

On the technical front, we can see weekly price trades off session troughs, circling nearby all-time peaks at 31,301 forged last week. The weekly timeframe’s trend line support, extended from the low 18,213, is worth noting, though do be aware support at 29,409 could also enter the fight.

In a market trending decisively higher since the beginning of 2020, daily demand at 30,310-30,637 re-entered the frame on Monday and, as you can see, has so far held back sellers. 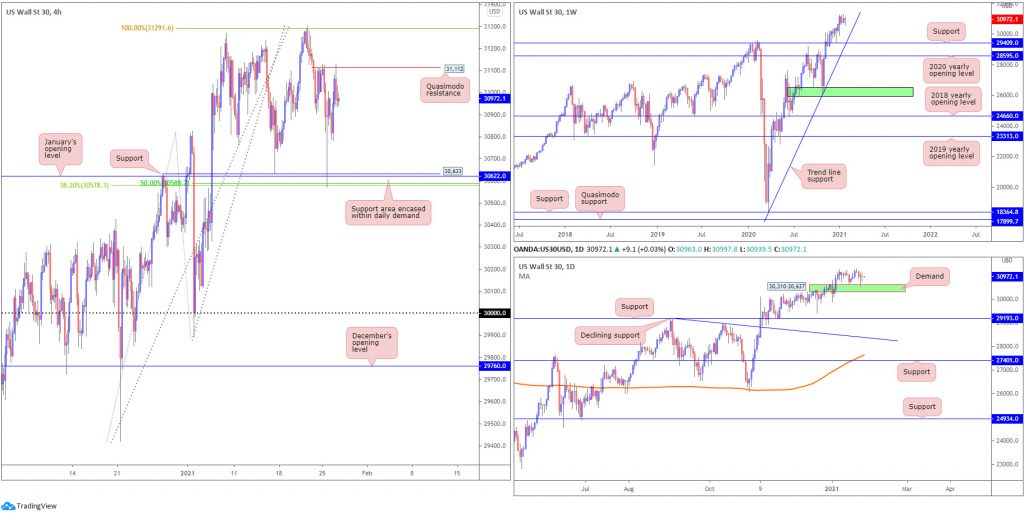 Overall, the price of gold versus the US dollar concluded another session mostly unmoved on Tuesday.

The weekly timeframe, thanks to last week’s bullish outside reversal candle, shows buyers may still enter the frame, taking aim at resistance drawn from $1,950. Traders may also want to acknowledge support is present at $1,787, set just north of another support at $1,738.

In conjunction with the weekly timeframe’s bullish outside reversal candle, price action on the daily timeframe is seen retesting the upper edge of the 200-day SMA (orange – $1,848). For the time being, though, buyers have lacked enthusiasm, establishing weak candles. Besides the $1,959 high formed in early January, any upside attempts could have buyers zero in on Quasimodo resistance taken from $1,966. Below the noted SMA, support is arranged around $1,746, sited south of a 100% Fibonacci extension point at $1,756, a 50.0% retracement ratio at $1,762 and above a 127.2% Fibonacci extension point at $1,740.

Across the page on the H4 timeframe, based on the higher timeframe’s position, buyers may approach November’s opening value at $1,878, though a dip to support at $1,822 is not out of the question to collect fresh buyers.

The H4 AB=CD pullback (blue arrows) around $1,920 and $1,910 (161.8% Fibonacci projection point/100% Fibonacci extension point) is an area sellers may also continue to watch. Although considered a high-probability pattern, the higher timeframes pointing north may limit selling pressure from the zone. 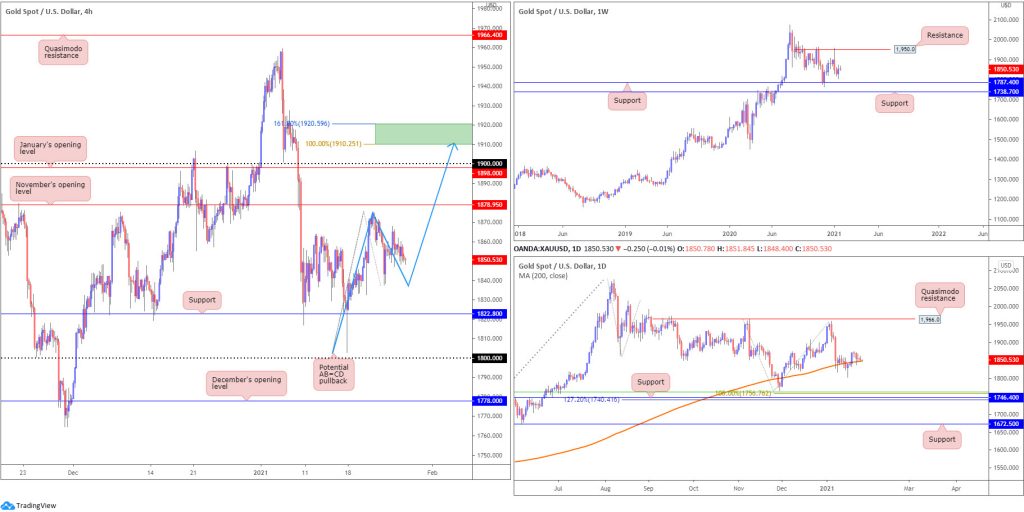