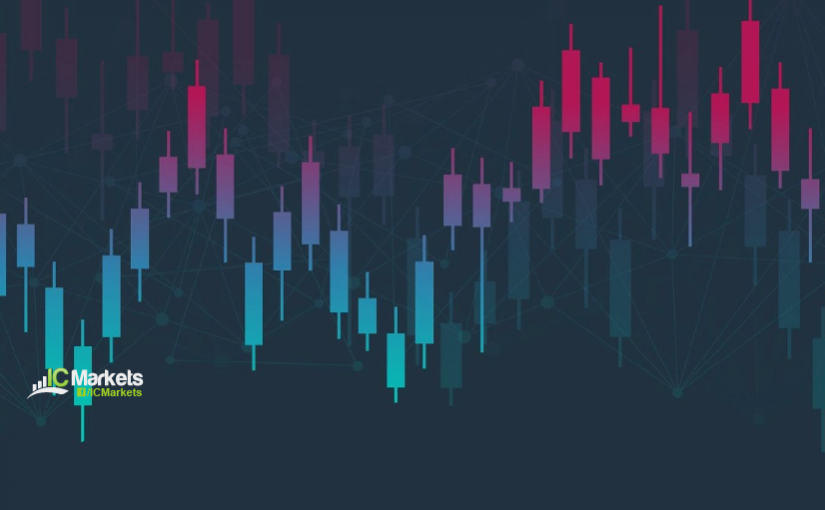 From the weekly timeframe, technicians will acknowledge room to advance (after testing minor support from 1.1621) until shaking hands with the 2018 yearly opening value at 1.2004 (a level that capped upside attempts in late August).

With regards to the technical picture on the daily chart, we see little stopping bulls from taking a run at resistance coming in at 1.1940. It is worth noting this base is sited just under weekly resistance mentioned above at 1.2004.

Given broader bullish signs on the higher timeframes (weekly and daily timeframes both appear to be free of any obvious resistance – on top of this, the immediate trend has curved higher since early 2020), further buying to H4 Quasimodo resistance at 1.1861 is a possibility.

Before reaching this far north, however, a retest at 1.1808 H4 support/1.18 handle could materialise, likely welcomed by dip-buyers. 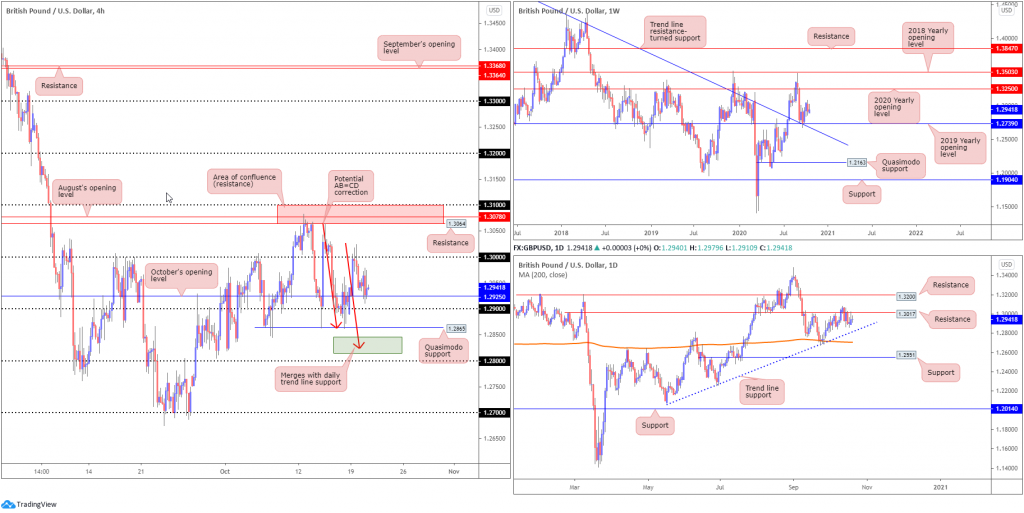 Technically, AUD/USD is testing a significant area of support on the weekly timeframe, made up of the 2020 (0.7016) and 2019 (0.7042) yearly opening values, following a correction from resistance at 0.7379. Note also that the pair has chalked up decisive upside since bottoming mid-March at 0.5506. Additionally, on the daily timeframe we can see price bottomed three pips ahead of support at 0.7017 yesterday, with the candle finishing considerably off worst levels, forming a hammer candlestick pattern.

With higher timeframes projecting higher prices, a bearish reaction from 0.7101-0.7087 could be short-lived, with breakout buyers likely watching for moves to form north of 0.71.

Overall, we have seen limited change on the bigger picture, therefore here’s a reminder of where we left Monday’s weekly briefing (italics):

Similarly, from the daily timeframe, little change is seen, aside from yesterday’s shooting star candlestick pattern (albeit not perfect form). Prominent areas to be aware of on the daily chart are resistance drawn from 106.06 and the weekly support level at 104.70. If resistance at 106.06 gives way, supply at 107.55-106.89, an area housed within the lower boundary of weekly supply underlined above at 108.16-106.88, is seen. Of note, the daily area also benefits from nearby Quasimodo resistance at 107.64 and the 200-day SMA (orange – 107.31). 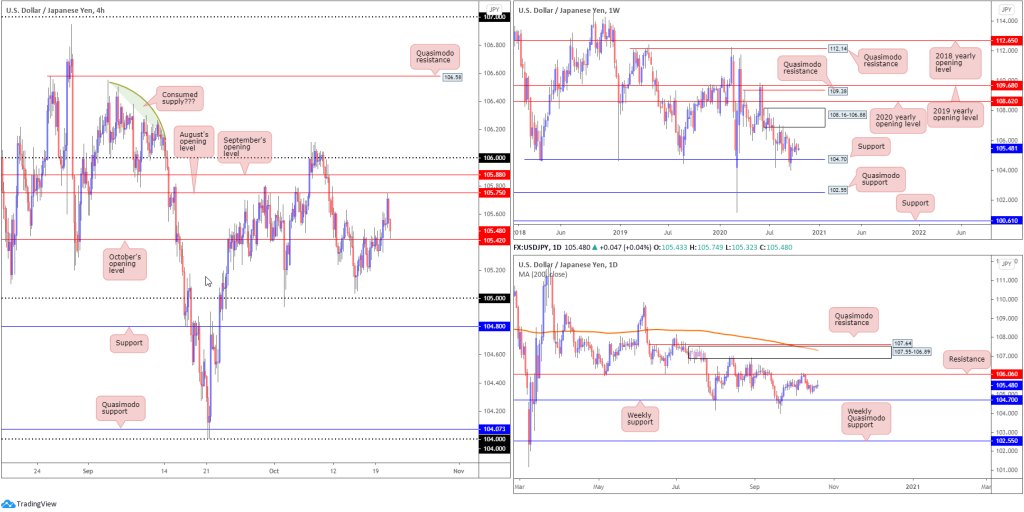 The US dollar shaved off 0.5% against the Canadian dollar Tuesday, concluding a handful of pips off session lows at 1.3104. Reacting from H4 trendline resistance, taken from the high 1.3420, the unit is now flirting with the possibility of joining 1.31. Digging under the round number today will have traders’ crosshairs shift towards September’s opening value at 1.3043 (according to our charts), closely shadowed by a 127.2% Fibonacci projection point at 1.3036.

Daily resistance at 1.3225 nudged its way into the spotlight last week and, as you can see, served sellers well. Should the Canadian dollar remain on the winning side of the table, revisiting Quasimodo support coming in at 1.3042 is a possible scenario.

As both weekly and daily timeframes exhibit scope to move as far south as 1.3059 (weekly timeframe), tunnelling under 1.31 today on the H4 unchains a potential bearish theme.

Aside from 1.3059, additional downside targets are visible at September’s opening value from 1.3043, as well as daily Quasimodo support at 1.3042, and then (with a strong bearish wind) possibly the key figure 1.30. 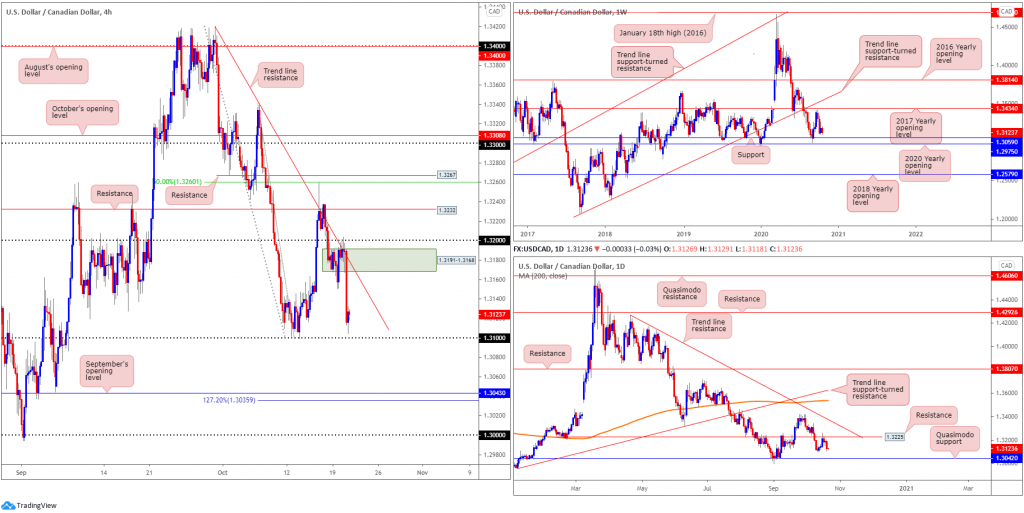 Follow-through selling surfaced Tuesday, extending Monday’s 0.5% decline from H4 trend line support-turned resistance, etched from the low 0.8998. After finding resistance at 0.91 in the early hours of Tuesday’s session, USD/CHF nosedived to a session low at 0.9055, a move that’s likely sparked interest in September’s opening value at 0.9038.

From the weekly timeframe, price, as aired in Monday’s technical briefing, retested resistance at 0.9255 (a previous Quasimodo support level) heading into October, movement that subsequently prompted two back-to-back near-full-bodied bearish candles. As a result, support at 0.9014, as well as ABCD support at 0.9051 (black arrows) and a long-term 61.8% Fibonacci retracement ratio at 0.9080 (green line – taken from 0.8300 [January 12 2015]), is in view (the Fib is currently under pressure). It is also worth noting USD/CHF has traded lower since topping in April 2019.

A closer reading of price action on the daily timeframe reveals we’re fast approaching weekly support mentioned above at 0.9014, after failing to grip resistance priced in at 0.9187. What’s interesting is weekly support on the daily chart also represents a Quasimodo support (red arrow – left shoulder).

With the 61.8% Fibonacci retracement ratio at 0.9080 on the weekly timeframe under fire, and room for both weekly and daily price to trade lower, September’s opening value at 0.9038 offers a clean downside target.

H4 successfully retesting 0.9073 resistance (although not the most robust resistance level ever seen) could be enough to interest sellers, though most conservative players are likely to seek additional confirmation before pulling the trigger.