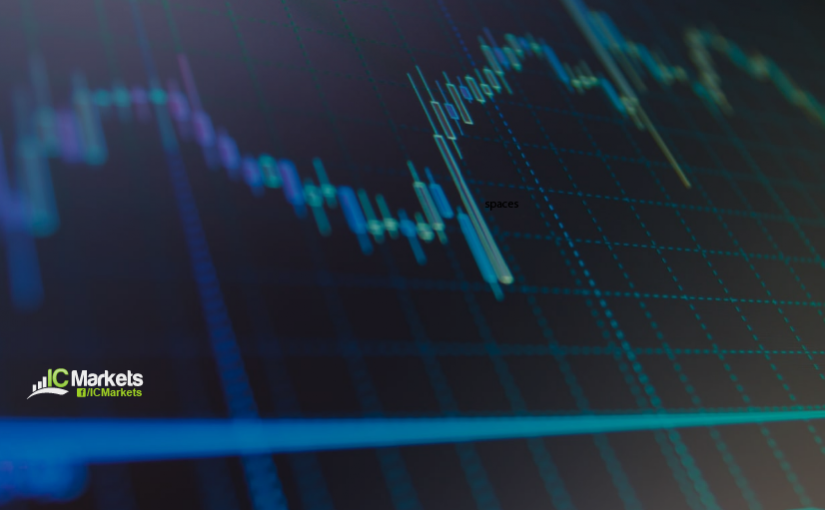 Technicians, according to the weekly timeframe, will acknowledge room to advance, as bulls strengthen their position north of minor support at 1.1621. The next upside target on the weekly scale falls in around the 2018 yearly opening value at 1.2004 (a level that capped upside attempts in late August).

The technical position on the daily timeframe also exhibits scope to explore higher terrain, with little stopping bulls from taking a run at resistance coming in from 1.1940. It is worth noting this base is sited just under weekly resistance mentioned above at 1.2004.

A closer reading of price action on the H4 timeframe shows the candles taking a breather north of a recently breached Quasimodo resistance at 1.1861 (now potential support). Taking to higher levels today could see buyers square off with another Quasimodo resistance at 1.1888. Additionally, the 1.19 handle is close by, along with an AB=CD correction point at 1.1905 (red arrows) and a 1.618 BC projection plotted at 1.1919. 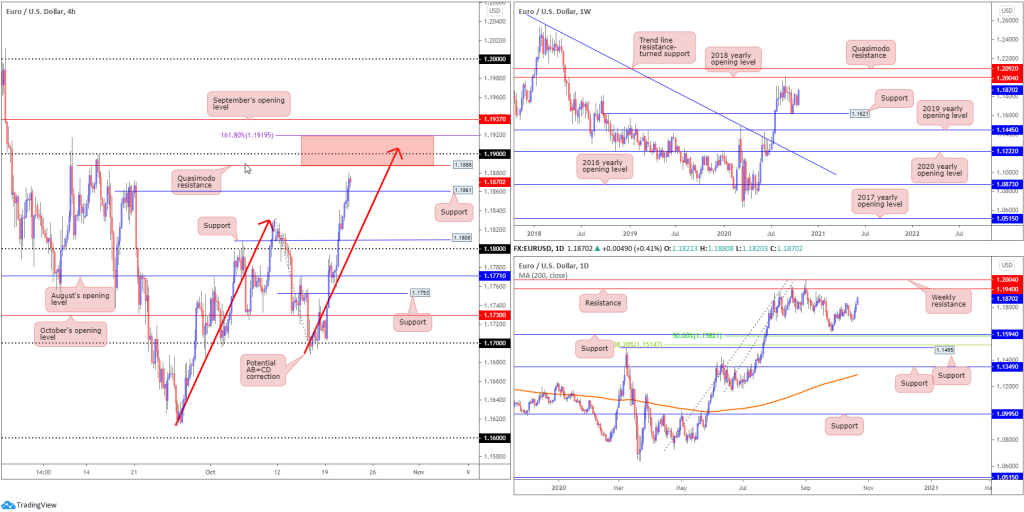 Sterling surged Wednesday, registering a fresh six-week high against the US dollar, amid reports Brexit negotiations are due to restart next week.

Across the page on the H4 timeframe, we can see recent upside welcomed channel resistance, taken from the high 1.3082. Note this area also converges with a 61.8% Fibonacci retracement ratio at 1.3174 and a nearby 127.2% Fibonacci projection point at 1.3190, along with the 1.32 handle.

The Australian dollar continued to pursue higher ground against soft USD demand on Wednesday, pulling H4 candles above the 0.71 handle to August’s opening value at 0.7128. Continuation moves north of the latter shines the spotlight on October’s opening value at 0.7169, which happens to intersect with a trend line resistance, extended from the high 0.7413.

Recent buying, technically, should not really be a surprise. Wednesday’s technical briefing noted we’re coming from weekly support (made up of the 2020 [0.7016] and 2019 [0.7042] yearly opening values), together with daily price bottoming three pips ahead of support at 0.7017. As for the trend, AUD/USD has also offered a healthy bullish stance since early 2020.

USD/JPY collapsed Wednesday amidst broad USD weakness, with technical shorts established south of October’s opening value at 105.42, the 105 handle and support at 104.80 (now potential resistance) exacerbating downside pressure on the H4 scale. Bearish targets, assuming we breach the 161.8% Fibonacci projection point at 104.37 (and 78.6% Fibonacci retracement ratio at 104.45), can be seen at Quasimodo support from 104.07, shadowed by the 104 handle.

Further afield, weekly price entered space south of support at 104.70. Though taking bearish breakout positions based on this may prove challenging, given the level has welcomed a number of whipsaws in the past. In addition to this, daily price eyes nearby support fixed from 104.18. Breaking the latter, however, could spark strong bearish interest, with weekly Quasimodo support at 102.55 targeted. 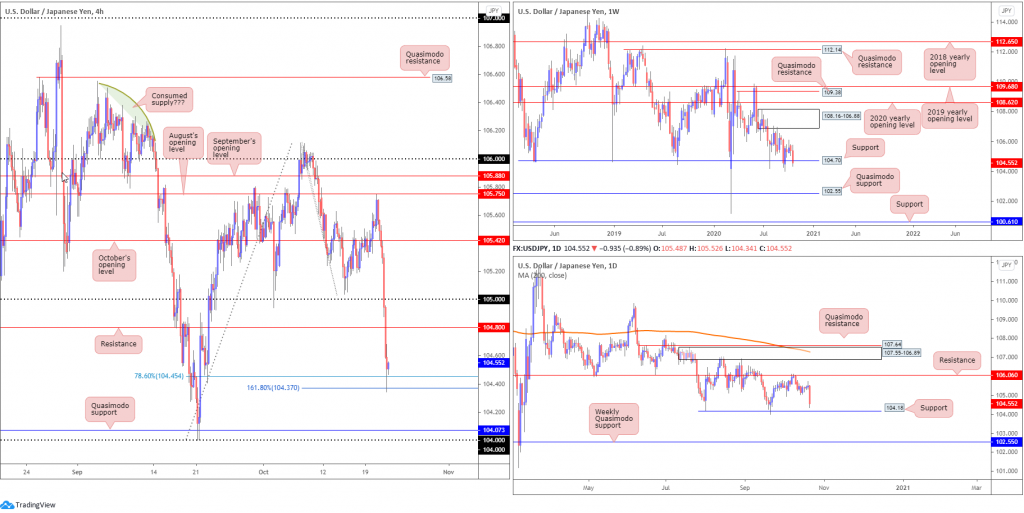 Wednesday witnessed H4 knock on the door of 1.31 and, albeit following a rather painful whipsaw to lows at 1.3081, stage a stronger-than-expected recovery. Technically, this swerves trend line resistance, taken from the high 1.3420, into sight, with a break exposing supply (green) around 1.3191-1.3168 (sited south of 1.32). Digging under 1.31, however, will have traders’ crosshairs shift towards September’s opening value at 1.3043 (according to our charts), closely shadowed by a 127.2% Fibonacci projection point at 1.3036.

Daily resistance at 1.3225 nudged its way into the spotlight last week and, as you can see, served sellers well. Downside momentum subsided Wednesday, however, responding by way of a hammer candle pattern. Should the Canadian dollar remain on the winning side of the table going forward, though, revisiting Quasimodo support coming in at 1.3042 is a possible scenario. 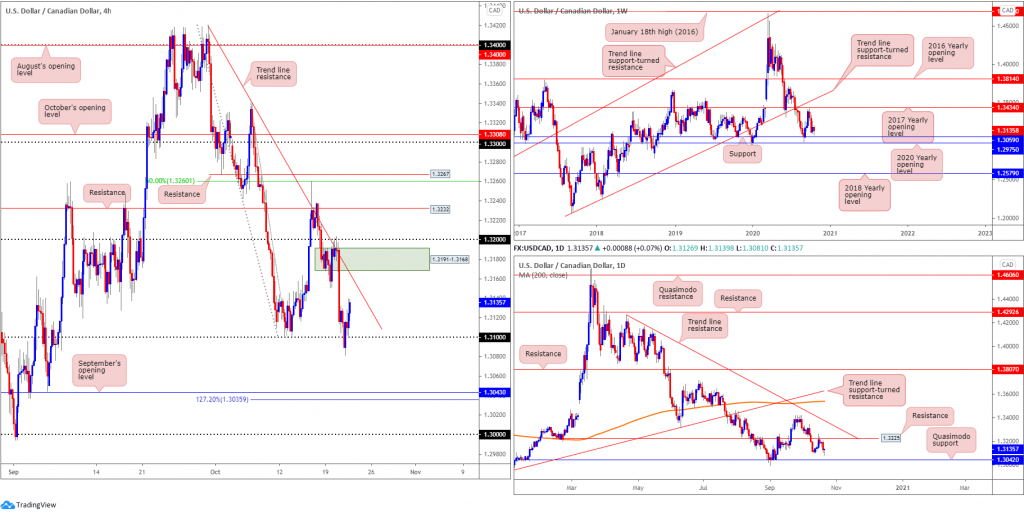 The US dollar extended its bearish position against the Swiss franc Wednesday, consequently generating a third consecutive daily bearish candle.

Based off the weekly timeframe’s technical position, we can see the unit fast approaching support at 0.9014, bolstered by ABCD support at 0.9051 (black arrows). Closer analysis of price action on the daily timeframe also reveals the pair closing in on weekly support mentioned above at 0.9014, after failing to grip resistance priced in at 0.9187. What’s interesting is weekly support on the daily chart also represents a Quasimodo support (red arrow – left shoulder).

Looking over the H4 chart, technical eyes will note September’s opening value at 0.9038, with the help of a 127.2% Fibonacci projection point at 0.9030, withstood downside attempts Wednesday. This could, assuming buyers maintain a bullish position, take the currency pair to H4 resistance at 0.9073. Interestingly, though, a break of 0.9030 leads price to a 161.8% Fibonacci projection point at 0.9019, sited ahead of weekly support underlined above at 0.9014. 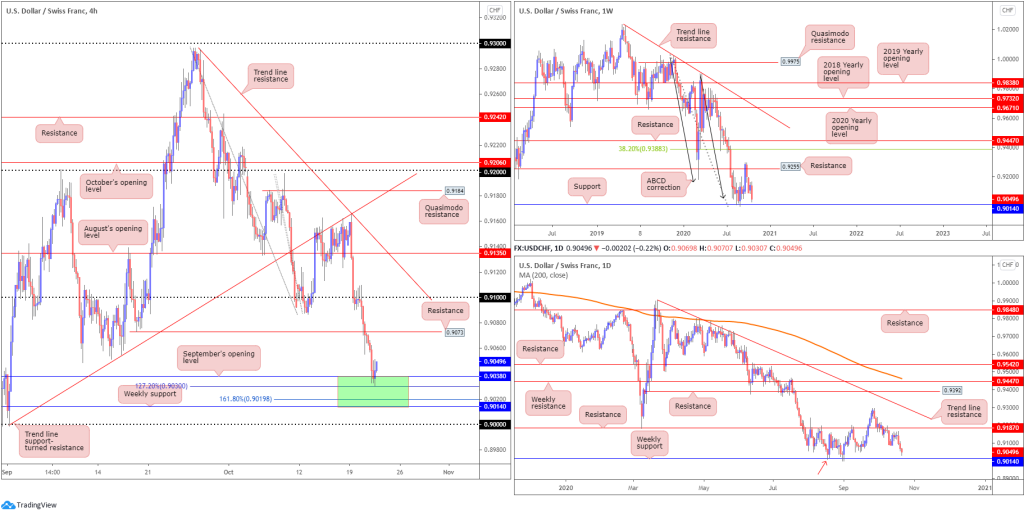 Entering Thursday’s session, the H4 candles are tucked between September’s opening value at 28369 and support coming in at 28216 (a prior Quasimodo resistance level). Price readers will acknowledge that a 28216 break today draws support at 27869 (October’s opening value) into the frame and a neighbouring 50.0% retracement ratio at 27763. Whereas a rotation higher, moves that climb above 28369, shines the spotlight on resistance at 28802. 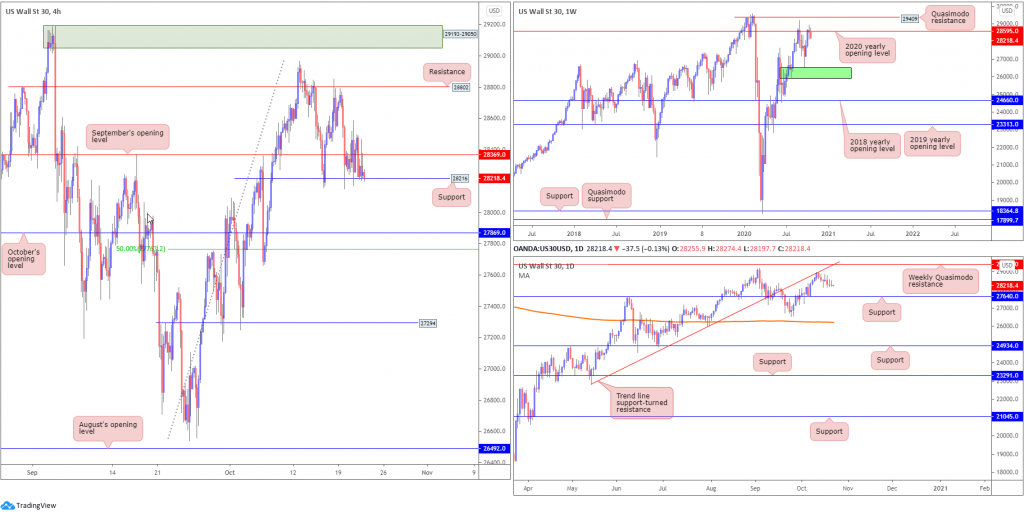 Kicking this morning’s analysis off from the top, weekly price continues to maintain a presence north of support at $1,882. Loitering nearby, channel resistance-turned support, taken from the high $1,703, is also visible. While the trend (higher since 2016) favours a bullish scenario here, the lack of buying interest seen from mid-August implies a dip to the aforementioned channel support. Traders are also urged to pencil in supports at $1,787 and $1,738 in the event buyers fail to make an appearance.

The daily timeframe recently overthrew resistance at $1,911, and is, at the time of writing, attempting to topple trend line resistance, taken from the high $2,015. The above could imply further upside is on the table and help confirm bullish intent off noted weekly support.

The story on the H4 timeframe reveals trendline support, taken from the low $1,848, has, despite a number of downside attempts, held firm. Wednesday finished above resistance at $1,916, though marginally off session peaks, consequently poised to potentially retest $1,916 today in the form of support. Directly overhead, we see the $1,933 October 11 peak, followed by H4 resistance at $1,941 and a 61.8% Fibonacci retracement ratio at $1,938. 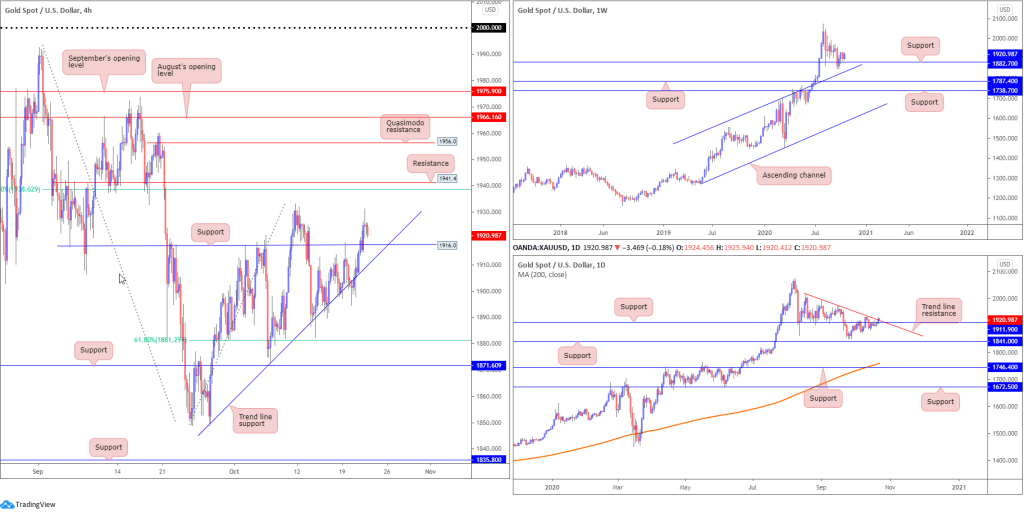