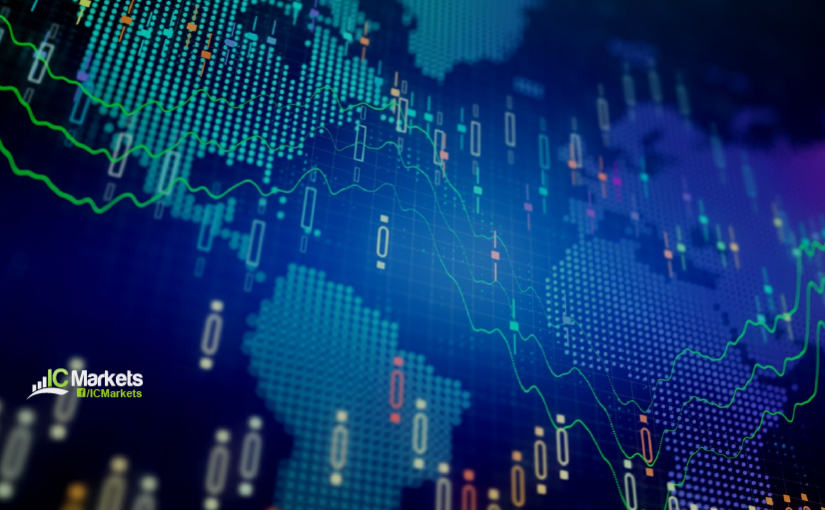 Eurozone, UK and US Flash Services and Flash Manufacturing PMIs.

Amidst a moderate upturn in the US dollar index, snapping a four-day bearish phase, EUR/USD twisted lower Thursday and left H4 Quasimodo resistance at 1.1888 unchallenged (sited close by the 1.19 handle, along with an AB=CD correction point at 1.1905 [red arrows] and a 1.618 BC projection plotted at 1.1919). H4 candles now face nearby support at 1.1808, merging with a 38.2% Fibonacci retracement and neighbouring 1.18 handle.

Technicians, according to the weekly timeframe, will acknowledge room to advance, as bulls strengthen their position north of minor support at 1.1621. The next upside target on the weekly scale falls in around the 2018 yearly opening value at 1.2004 (a level that capped upside attempts in late August).

The technical position on the daily timeframe also exhibits scope to explore higher terrain, with little stopping bulls from taking a run at resistance coming in from 1.1940. It is worth noting this base is sited just under weekly resistance mentioned above at 1.2004.

Having been in pole position only 24 hours ago, sterling rocked lower against the US dollar Thursday and snapped a four-day bullish phase.

As evident from the charts, price left daily resistance at 1.3200 unchallenged and rebounded from the H4 channel resistance/61.8% Fibonacci retracement combination. This witnessed the 1.31 handle (H4) enter the fray amid US hours, aided by H4 support in the shape of August’s opening value at 1.3078 (sited just north of another support at 1.3064). 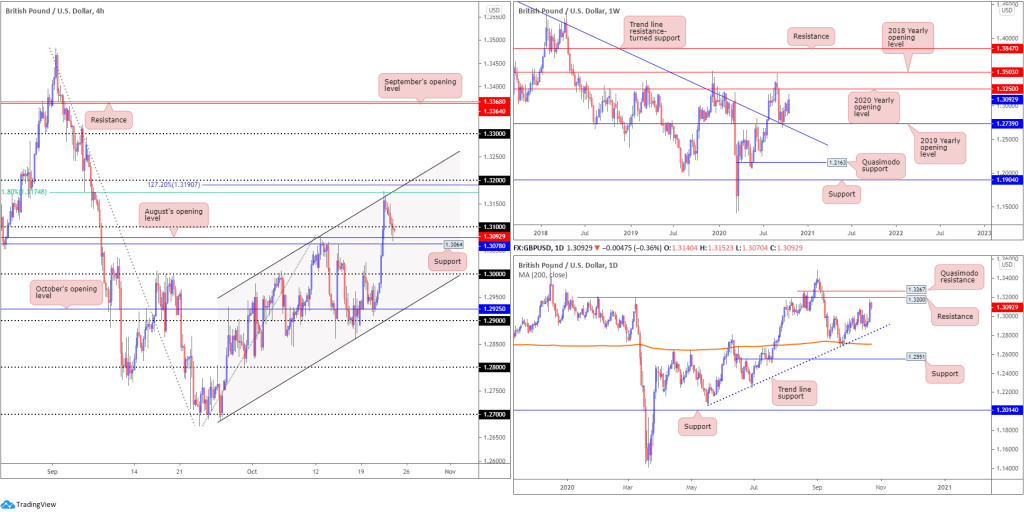 The Australian dollar wrapped up Thursday off session lows against a broadly upbeat USD, chaotically holding the 0.71 handle on the H4 timeframe to potentially test the mettle of August’s opening value at 0.7128 today. Any sustained movement beyond the latter exposes October’s opening value at 0.7169, which happens to intersect closely with a 61.8% Fibonacci retracement at 0.7157, as well as a trend line resistance, extended from the high 0.7413.

Upside pressure, as underlined in Thursday’s technical briefing, should not really be a surprise. Recent analysis noted we’re coming from weekly support (made up of the 2020 [0.7016] and 2019 [0.7042] yearly opening values), together with daily price bottoming three pips ahead of support at 0.7017. As for the trend, AUD/USD has offered a healthy bullish stance since early 2020. 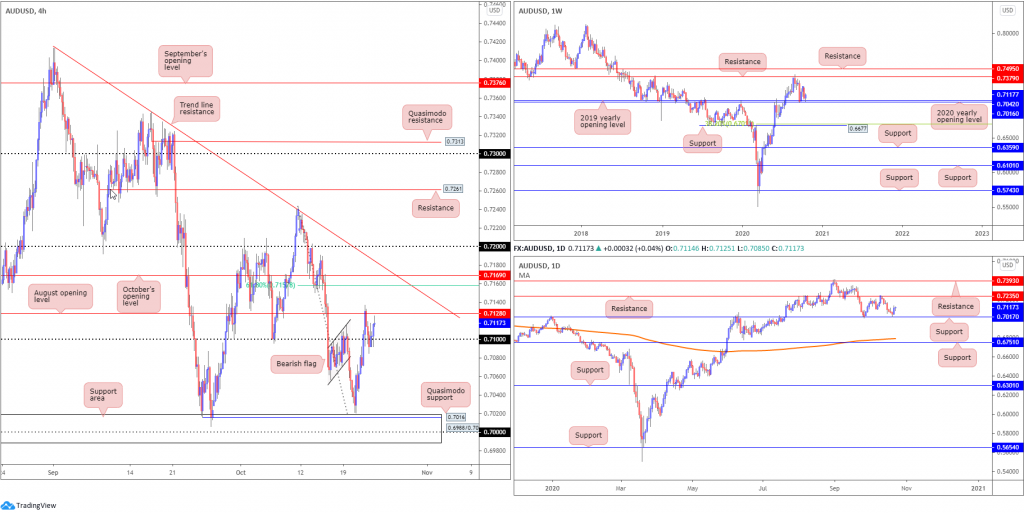 Further out, weekly price, although recently entering space south of support at 104.70, is seen balancing above the aforementioned level thanks to yesterday’s bid. Daily price, on the other hand, pencilled in a bottom just ahead of support fixed from 104.18. Eventually breaking the latter, however, could spark strong bearish interest, with weekly Quasimodo support at 102.55 targeted.

Wednesday’s stronger-than-anticipated recovery from 1.31 on the H4 scale swerved trend line resistance, taken from the high 1.3420, into sight Thursday. Aided by supply (green) around 1.3191-1.3168 (sited south of 1.32), the aforementioned trend line formed a relatively stable limit yesterday which may prompt another run at 1.31 today. Digging under 1.31, however, will have traders’ crosshairs shift towards September’s opening value at 1.3043 (according to our charts), closely shadowed by a 127.2% Fibonacci projection point at 1.3036.

Daily resistance at 1.3225 nudged its way into the spotlight last week and has so far served sellers well. Downside momentum subsided Wednesday, responding by way of a hammer candle pattern. Despite considered a bullish signal, the formation failed to deliver much upside as price responded in the shape of a shooting star candlestick configuration. Should bears regain some form of control today/early next week, Quasimodo support at 1.3042 is a possible scenario.

Traders short the trend line resistance/supply combination are likely eyeballing moves towards 1.31 today. Tunnelling under 1.31 on the H4 also unchains a potential bearish theme, targeting 1.3059 as an initial take-profit zone.

For those who read Thursday’s technical briefing, you may recall the following (italics):

The area marked green on the H4 timeframe between weekly support at 0.9014 and September’s opening value from 0.9038 echoes strong support.

Based off the weekly timeframe’s technical position, we can see the unit fast approaching support at 0.9014, bolstered by ABCD support at 0.9051 (black arrows). Closer analysis of price action on the daily timeframe also reveals the pair closing in on weekly support mentioned above at 0.9014, after failing to grip resistance priced in at 0.9187. What’s interesting is weekly support on the daily chart also represents a Quasimodo support (red arrow – left shoulder). 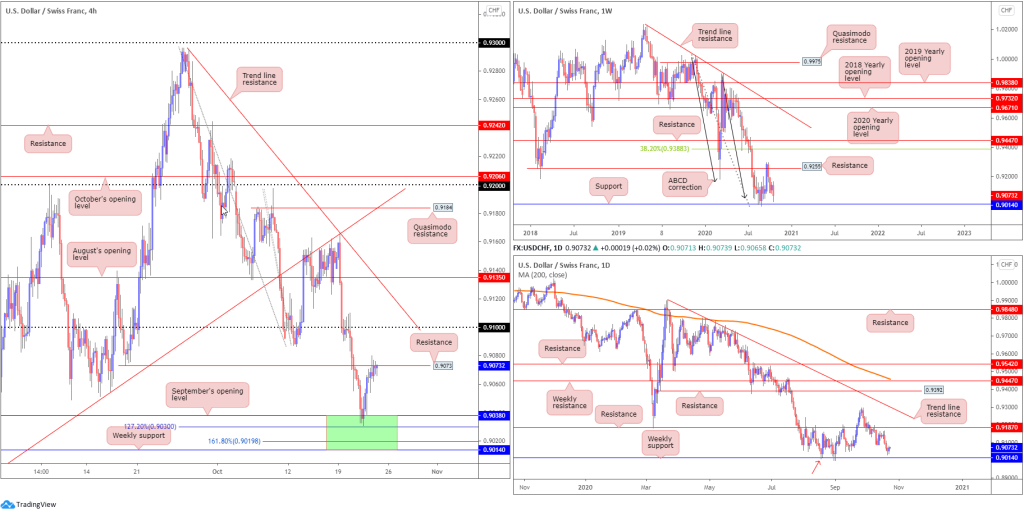 From a technical position, weekly action remains flirting with 28595, a 2020 yearly opening value, with a break shining the spotlight on Quasimodo resistance at 29409. Daily price, on the other hand, concluded Thursday in the shape of a hammer pattern (bullish signal), north of support at 27640. Further buying from this point, according to the daily timeframe, could stretch as far north as the weekly Quasimodo resistance at 29409, which happens to converge with trend line support-turned resistance, extended from the low 22803.

Across the page on the H4 chart, we can see the candles rebounded from ABCD support (green arrows) at 28049, a completion point strengthened by a 38.2% Fibonacci retracement ratio and a 50.0% retracement ratio at 28073. Notably, we also crossed above resistance at 28369 (September’s opening value), potentially setting the technical stage for a push to resistance at 28802.

Buyers and sellers continue to battle for position around weekly support at $1,882, fixed a touch above channel resistance-turned support, taken from the high $1,703. While the trend (higher since 2016) favours a bullish scenario here, the lack of buying interest seen from mid-August implies a dip to the aforementioned channel support. Traders are also urged to pencil in supports at $1,787 and $1,738 in the event buyers fail to make an appearance.

The daily timeframe recently tested a descending resistance line, taken from the high $2,015, and held firm Thursday, engulfing Wednesday’s upside move. We also appear to have a falling wedge forming between $2,015 and $1,862, which may be interpreted as a continuation signal in the event of a breakout north.

The technical landscape on the H4 chart shows price failed to challenge near-two-week peaks at $1,933 before tumbling on Thursday and overthrowing trend line support, taken from the low $1,848. This may have sellers work towards the 61.8% Fibonacci retracement ratio at $1,881 today, followed by support at $1,871. 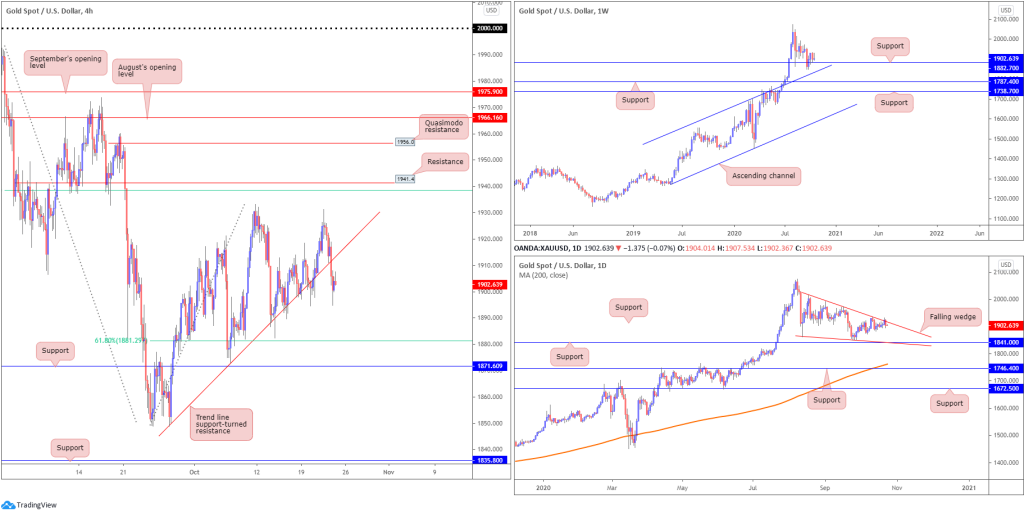