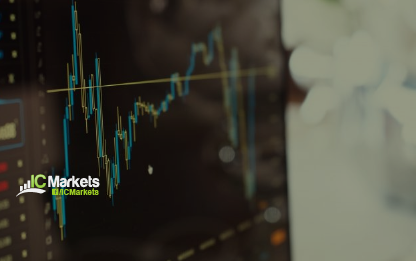 Technical direction on the weekly timeframe remains to the upside, following healthy demand off support at 1.1621 early November. Buyers appear poised to approach the 2018 yearly opening value from 1.2004, closely shadowed by Quasimodo resistance at 1.2092.

Direction on the weekly timeframe is further reinforced by the daily timeframe’s recently formed bullish candlestick signal. Resistance on the daily chart can be seen at 1.1940, followed by Quasimodo resistance from 1.1965.

H4 discovered support around the 1.1820ish region yesterday, arranged in the shape of three clear-cut buying tails. This spins the spotlight towards Quasimodo resistance at 1.1895 and the 1.19 handle. Lack of interest to the upside, nonetheless, could swing things towards 1.18, with a possible dip to Quasimodo support priced in at 1.1779.

Some initial weakness took hold Thursday amidst Brexit talks, spiking to lows at 1.3195 and testing the grip of the 1.32 handle on the H4 scale. The rebound from 1.32 has so far exhibited strong position, threatening a potential follow-through towards 1.33 and the formation of a daily hammer candle pattern.

The 2020 yearly opening value at 1.3250 remains under attack on the weekly timeframe, with additional strength to potentially see the unit knock on the door of the 2018 yearly opening value from 1.3503. In line with resistance on the H4 timeframe at 1.33, however, daily price recently shook hands with a bearish harmonic Gartley pattern’s PRZ at 1.3384/1.3312, with the 38.2% daily Fibonacci retracement ratio at 1.3101 to target.

After brushing aside 0.73, AUD/USD made a dive for ABCD support on the H4 scale at 0.7263 (black arrows), with bulls so far reacting favourably. Assuming buyers maintain course into Friday and overpower orders around 0.73, Quasimodo resistance at 0.7342 is next on tap, closely followed by September’s opening value at 0.7376.

The possibility of additional bullish flow is strengthened by the retest of support from 0.7235 last week on the daily timeframe, as well as yesterday’s hammer candlestick pattern. This could sweet-talk buyers to attempt to take a run at resistance at 0.7393 (positioned above weekly resistance). 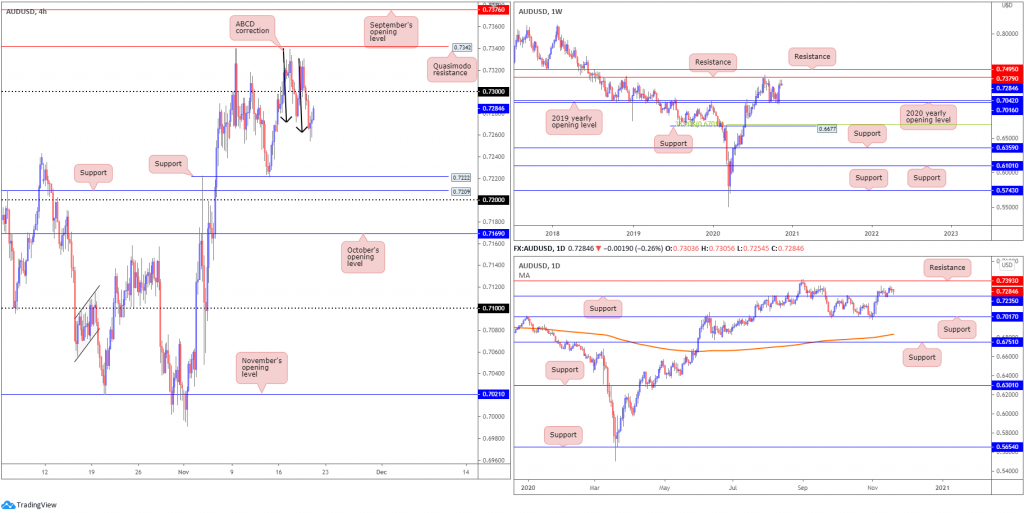 USD/JPY, following five consecutive bearish days, finished off best levels Thursday after a failed attempt to overthrow 104 on the H4 chart. Ultimately, with 104 representing resistance, moves to Quasimodo support at 103.21 will likely be eyed by sellers.

The bearish landscape on the H4 timeframe is echoed on the daily chart, following Wednesday’s break of support at 104.06 and Thursday responding to the underside of the level. Burrowing through this level shines the headlights on weekly Quasimodo support at 102.55.

From the weekly timeframe, since reconnecting with the underside of supply at 108.16-106.88 in August, weekly candles have slowly grinded lower, forming a declining wedge (106.94/104.18). Quasimodo support mentioned above at 102.55 is in view, with a break exposing support plotted at 100.61. A strong bounce from 102.55 may provide enough impetus for buyers to attempt a breakout above the current declining wedge.

A micro Quasimodo resistance level at 1.3118 on the H4 scale has proven a stubborn area to overpower, located just above the 1.31 handle. With sellers rebounding from 1.3118 in recent trading, September’s opening value calls for attention at 1.3043, with a break exposing the key figure 1.30.

The 2020 yearly opening value at 1.2975 on the weekly timeframe, arranged north of a Quasimodo support priced in at 1.2887, triggered a wave of buying last week, closing modestly off best levels. Given this market has traded lower since topping at 1.4667 in early 2020, breaking the aforementioned supports also remains an option, consequently swinging the pendulum in favour of further weakness towards the 2018 yearly opening value at 1.2579. Additional interest to the upside, nevertheless, could eventually fuel a test of the 2017 yearly opening value at 1.3434, covered under trend line support-turned resistance, taken from the low 1.2061.

With weekly price rebounding from support at 1.2975 as well as daily price also recently coming off support at 1.2973 (essentially marking the same area), flow on the daily chart, despite lacklustre movement of late, reveals room to rally as far north as 1.3330.

Buyers struggled to retain position Thursday (leaving trend line resistance, taken from the high 0.9295, and November’s opening value at 0.9161, unchallenged), with recent hours sparking strong selling off session peaks amidst broad dollar softness – DXY below 92.50. This swings the 0.91 handle back in view, a level located above an area of support at 0.9075-0.9088. Removing the aforementioned areas today unearths possible selling in the direction of September’s opening value at 0.9038 and a key psychological figure at 0.90.

The weekly timeframe reveals buyers entered a reasonably heavy bid off support at 0.9014 last week, a level dovetailing closely with ABCD support at 0.9051 (black arrows). 0.9255 resistance (a prior Quasimodo support) is next in the firing range should buyers continue to support this market, with a 38.2% Fibonacci retracement ratio forged at 0.9388 to target should further buying emerge (an initial take-profit target associated with the ABCD support mentioned above). It should also be noted that this market has been trending lower since April 2019.

From the daily timeframe, however, we are, following a decisive recovery off Quasimodo support at 0.9009, languishing beneath resistance at 0.9187. Beyond the latter, assuming weekly players eventually push higher, traders may recognise nearby trend line resistance, taken from the high 0.9901, which happens to merge closely with weekly resistance mentioned above at 0.9255. 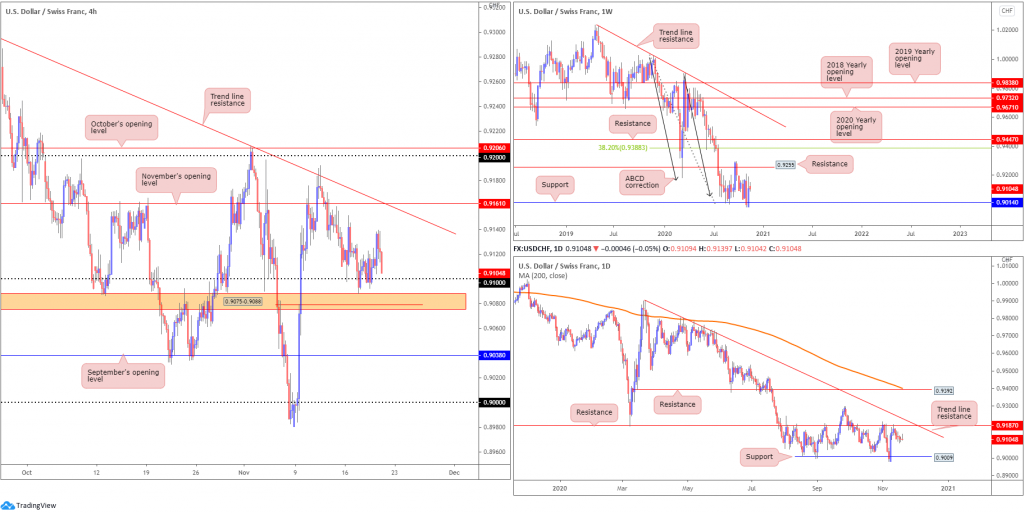 Kicking things off from the top this morning, traders will acknowledge the Dow trades off all-time peaks at 30097, with the current weekly candle on track to produce a shooting star formation. In itself, this may inspire a retest at the 2020 yearly opening value from 28595.

A closer reading of price action on the daily timeframe reveals the unit could confront declining support, taken from the high 29193. Should a break of here come to pass, support at 27640 is seen, closely followed by trend line support, etched from the low 18213.

Spot gold decline for a fourth consecutive session against the dollar Thursday, though finished significantly off worst levels, aided by Quasimodo support on the H4 scale at $1,852. The rebound from this angle has likely caught the interest of buyers for two reasons. First, despite the current correction gold is in right now, the primary uptrend remains intact and, secondly, weekly price is treading water just north of channel resistance-turned support, taken from the high $1,703.

In addition to the above, daily price is seen hovering above support coming in at $1,841. Another feature worth highlighting on the daily chart is a possible falling wedge pattern between $2,075/$1,862. 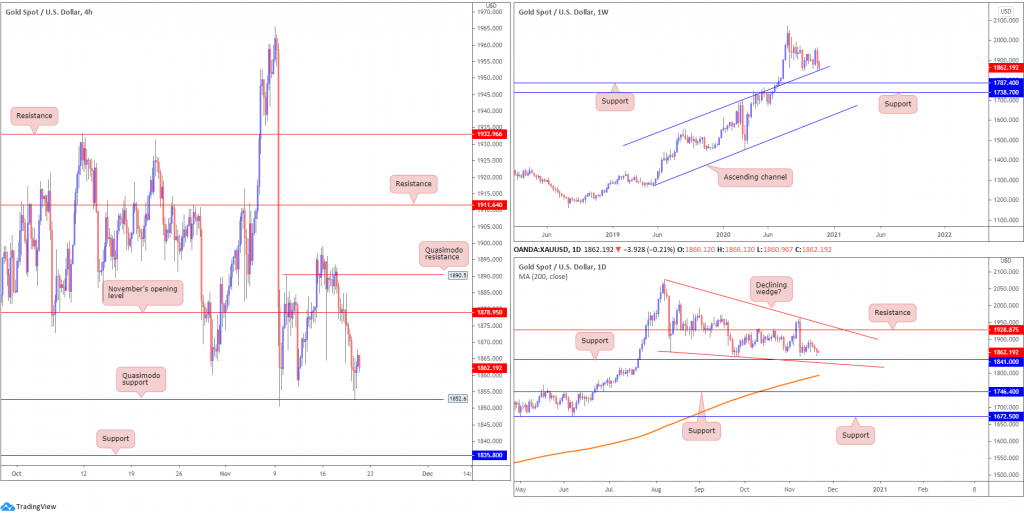