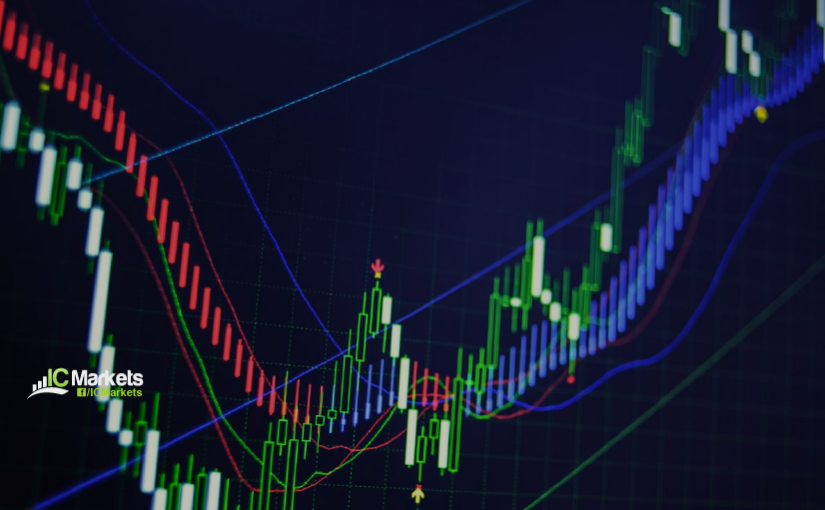 Europe’s single currency posted modest gains against the US dollar Tuesday, with H4 candles now seen touring just south of 1.19 and Quasimodo resistance at 1.1895. The scenery north of 1.19 reveals room to approach September’s opening value at 1.1937, while to the downside the 1.18 handle calls for attention, followed by Quasimodo support priced in at 1.1779.

Meanwhile, the weekly timeframe shows neither buyers nor sellers are willing to take control, despite healthy interest off support at 1.1621 early November. Should buyers regain consciousness, nevertheless, the 2018 yearly opening value at 1.2004, closely shadowed by Quasimodo resistance priced at 1.2092, are on show. Traders may also want to acknowledge July’s trend line resistance break, taken from the high 1.2555, on top of the break of the 1.1495 March 9 swing high, consequently placing long-term buyers in a reasonably healthy position.

The daily timeframe witnessed fresh highs form November 9 (red arrow), following a spike to lows ahead of support at 1.1594 and a 50.0% retracement ratio from 1.1582. For some, this may be understood as bullish confirmation. Resistance, however, is seen at 1.1940, followed by Quasimodo resistance from 1.1965. Traders may also recognise that just beyond the aforementioned resistances, weekly resistance at 1.2004 is seen (2018 yearly opening value).

GBP/USD entered another offensive phase Tuesday, bid on the back of risk-on trading. Recording a third consecutive daily advance, deriving technical support from the 1.33 region, H4 is circling within striking distance of familiar resistance between 1.3425/1.3368 (made up of two 127.2% Fibonacci projection points at 1.3425/1.3368, the round number 1.34, an 88.6% Fibonacci retracement ratio at 1.3390 and September’s opening value at 1.3368).

Elsewhere, the daily picture, thanks to recent upside, is seen squeezing sellers within the bearish harmonic Gartley pattern’s PRZ at 1.3384/1.3312. Overthrowing the aforementioned PRZ could be viewed as an early cue we’re headed for the 2018 yearly opening value at 1.3503 on the weekly scale.

Risk currencies outperformed Tuesday, with AUD/USD rallying nearly 1% and breaching the top side of a H4 ascending triangle pattern (0.7340). This projects a possible target of around 0.7544 (red arrows), implying a break above September’s opening value at 0.7376, the 0.74 handle and Quasimodo resistance at 0.7403.

Buyers, based on the weekly timeframe, are seen extending the 3% showing off the 2020 (0.7016) and 2019 (0.7042) yearly opening values (supports) formed early November, positioning the unit within striking distance of resistance at 0.7379. In view of this market trending higher since early 2020, buyers may also be eyeballing resistance parked at 0.7495.

Following the November 13 retest of support at 0.7235, despite a somewhat lacklustre performance last week, buyers have eventually found some grip and shined the spotlight on resistance at 0.7393 (positioned above weekly resistance). 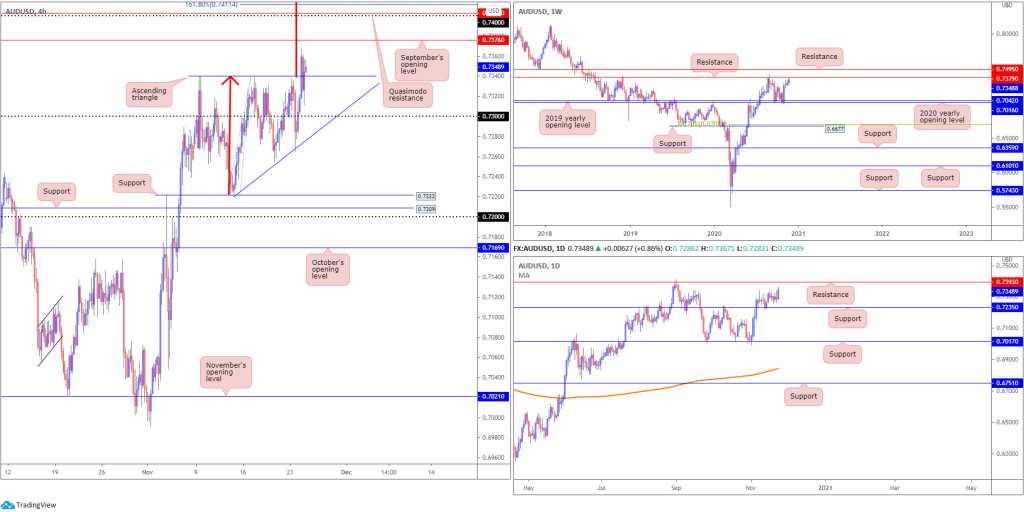 Appreciating for a third consecutive session, upbeat risk sentiment bolstered USD/JPY movement going into London’s morning session on Tuesday. Dumping the yen in favour of the buck led H4 above November’s opening value at 104.50 to peaks at 104.76.

Against the backdrop of the H4 timeframe, weekly price, since connecting with the underside of supply at 108.16-106.88 in August, has gradually shifted lower and developed a declining wedge (106.94/104.18). Quasimodo support at 102.55 is in the picture, with a break exposing support plotted at 100.61. A strong bounce from 102.55 may provide enough impetus for buyers to attempt a breakout above the current declining wedge.

The technical landscape from the daily timeframe, however, reveals scope to close in on trend line resistance, extended from the high 111.71, with a break to perhaps take a run at resistance from 106.06. Nevertheless, sellers taking over could lead price to the 103.17 November 6 low, followed by weekly Quasimodo support at 102.55. 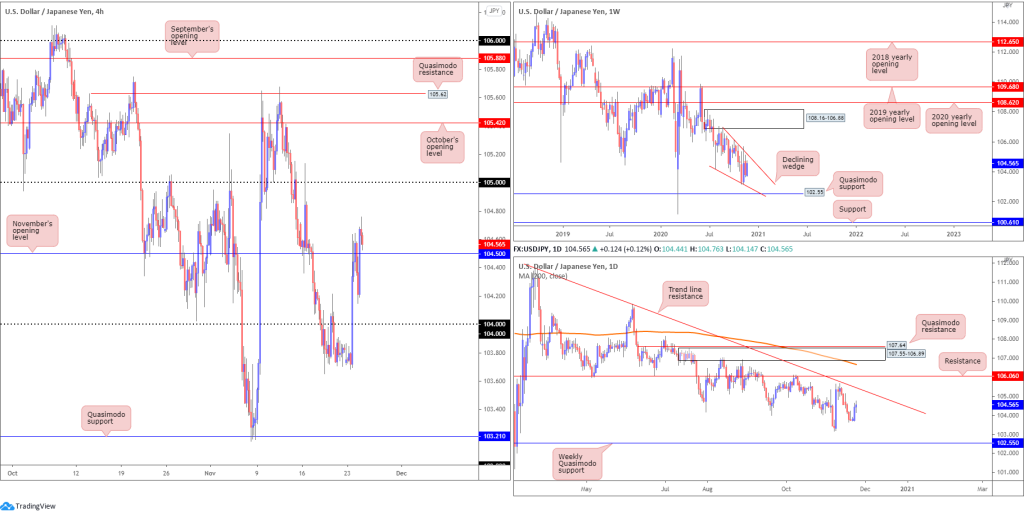 The US dollar slipped to 2-week lows against the Canadian dollar Tuesday, weighed by WTI climbing above $44.50 a barrel and the US dollar index tunnelling through 92.50.

Demolishing September’s opening value at 1.3043 on the H4 scale has led candles to within touching distance of the key figure 1.30 (a widely watched level in this market that’s joined by a Quasimodo support [red arrow] around 1.2997). Removing the round number today may clear the river south towards H4 Quasimodo support at 1.2927.

However, before reaching for the aforementioned H4 Quasimodo, traders might want to take into account weekly support resides close by in the form of a 2020 yearly opening value at 1.2975, as well as daily support coming in at 1.2973 (essentially marking the same region). 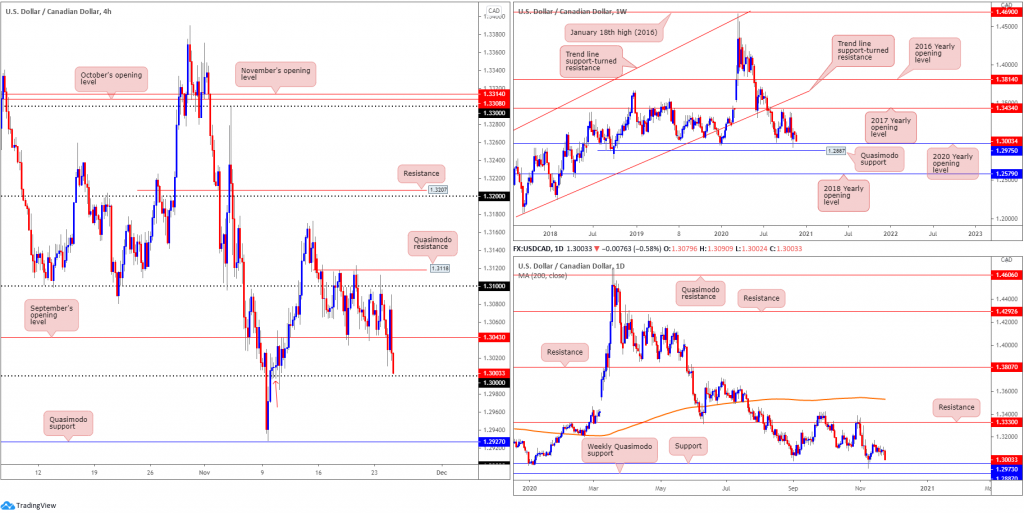 For those who have been following our USD/CHF analysis over the past few days, technical traders will acknowledge the recent recovery from H4 support at 0.9075-0.9088 and, of course, the whipsaw through 0.91. The retest of the noted round number yesterday, a move highlighted as a possibility in Tuesday’s technical briefing, could lead buyers to test H4 trend line resistance, extended from the high 0.9295, followed by November’s opening value at 0.9161.

Action on the higher timeframes, however, remains pretty much unmoved, with daily price chalking up back-to-back indecision doji candles. 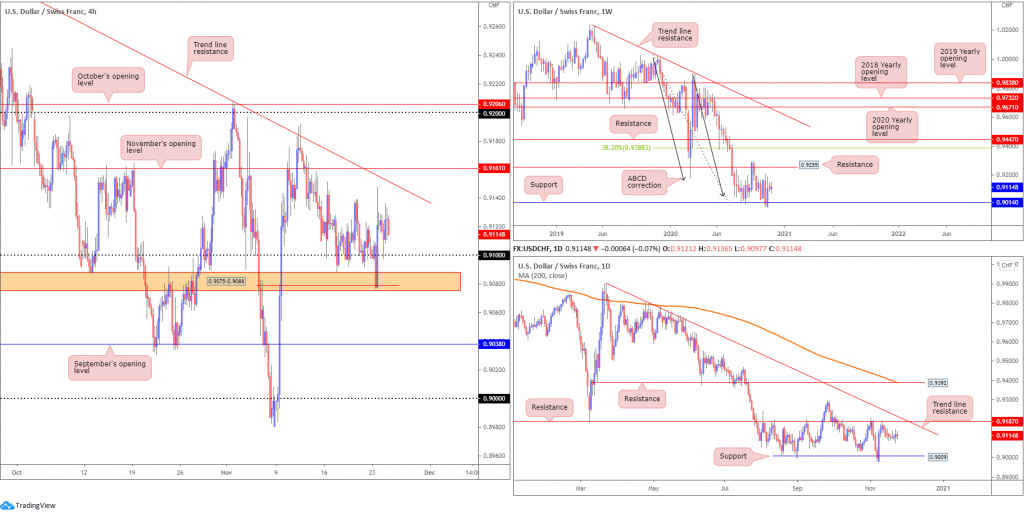 Spot gold registered a second day of losses Tuesday, down 1.7% against the US dollar.