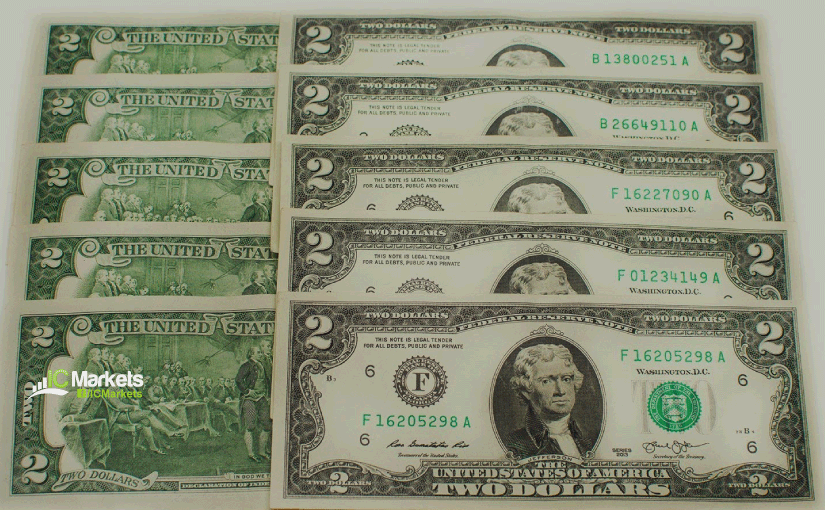 Upbeat risk sentiment guided the US dollar to lower levels Monday, subsequently lifting EUR/USD to fresh pinnacles at 1.1370ish by the European close.

Further out, Monday also took on long-term trend line resistance, extended from the high 1.2555, shifting focus on the weekly timeframe to the 2019 yearly opening level at 1.1445.

Since the beginning of June, daily resistance at 1.1349 has, as you can see, held back buyers. Recent hours, however, witnessed price penetrate the aforementioned region, pointing to a potential approach towards a 161.8% Fibonacci extension point at 1.1464, combined with a channel resistance, extended from the high 1.1147.

With buyers managing to find their feet early on, a continuation to the upside may be in store, particularly after the break of higher timeframe resistances (weekly trend line resistance and daily resistance at 1.1349).

As a result of the above, today’s technical spotlight is fixed on 1.1345 H4 support, which may call for a retest and lure dip-buying into the fold. Conservative buyers will possibly seek additional confirmation before pulling the trigger, though irrespective of the entry method the initial take-profit targets rest at 1.1383 and 1.14 on the H4.

The British pound concluded a shade lower against the greenback Monday, fading H4 Quasimodo resistance at 1.2653. Downside had the unit breach channel support, taken from the low 1.2257 (and retest the underside of the latter as resistance), and compete with orders at 1.26 as well as May’s opening level at 1.2583. A notable H4 close south of the latter could trigger another wave of selling today, with crosshairs fixed on 1.25 as the next support target.

The story on the weekly timeframe, following two consecutive weeks of gains, has price located within touching distance of a 61.8% Fibonacci retracement ratio at 1.2718 and the 2019 yearly opening level at 1.2739. Despite the recent sell, striking this area remains a possibility.

Movement on the daily timeframe, meanwhile, languishes just south of substantial resistance, made up of trend line support-turned resistance, taken from the low 1.1409, another trend line resistance, extended from the high 1.3514, the 200-day SMA (orange – 1.2689) and resistance at 1.2769. This resistance combination also boasts a connection to the aforementioned weekly resistances.

A decisive H4 close south of 1.2583 may imply sellers have enough fuel in the gas tank to push lower, despite not having brought in higher timeframe resistances (see above). While aggressive sellers may opt for an entry at the close of the breakout candle, a retest at the underside of 1.2583 provides an additional entry point to consider, particularly for conservative traders.

Failing the above, a rally to 1.27 would be interesting. Not only does the psychological base represent a take-profit target for longs north of the 1.26 vicinity, the round number emphasises robust resistance, closely joined by a collection of daily and weekly resistances (highlighted above).

The Australian dollar initially rose on the upbeat risk tone Monday as the US dollar navigated deeper terrain. Things turned sour in recent hours, though, as risk levelled off, forcing an intraday top ahead of 0.70 on the H4. Local H4 support around 0.6930ish (green) is seen close by. If a break comes to pass, the H4 candles are bound for 0.69 and July’s opening level at 0.6901. South of here, the pair appears starved of support until a Quasimodo formation hits at 0.6840.

From the weekly timeframe, resistance, forged in the shape of a 2020 yearly opening level and a 2019 yearly opening level, at 0.7016 and 0.7042, respectively, remains on the radar. It might also interest some traders to note just above the said resistances we have a 61.8% Fibonacci retracement ratio sited at 0.7128 (green). In terms of support on the weekly timeframe, crosshairs remain fixed on 0.6677.

A closer reading of candle action on the daily timeframe shows price wandering no man’s land (lack of technical structure), albeit steadily grinding higher. Of particular interest on the chart, however, is Quasimodo resistance positioned at 0.7049, a level linking with trend line support-turned resistance, taken from the low 0.6670. Another level worth noting is support coming in at 0.6751 and the 200-day SMA (orange – 0.6674).

With the round number 0.70 (H4) sharing space with weekly resistance at 0.7016, the 2020 yearly opening level, this combination remains a key reversal zone to watch.

To the downside, we have the 0.69 handle merging with July’s opening level at 0.6901 on the H4. Although capable of withstanding downside attempts, the base lacks higher timeframe confluence, therefore vulnerable. 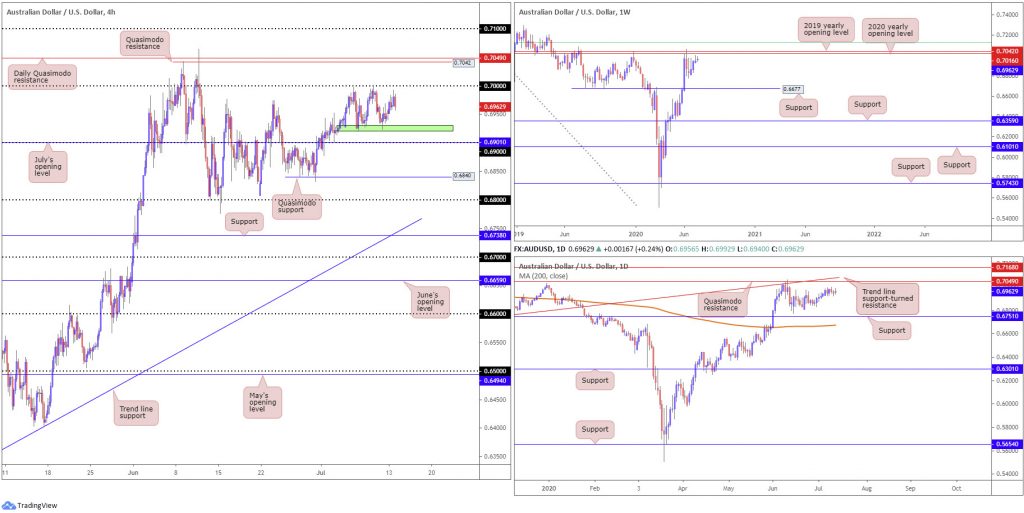 For traders who read Monday’s technical briefing you may recall the following (italics):

The US dollar extended losses against its Japanese counterpart Friday, leaping through 107 support and testing an interesting area of support at 106.68, in the shape of a strong bullish candle. 106.68, a 161.8% Fibonacci extension point that converges closely with Quasimodo support at 106.66, represents the completion of what is known as an ‘alternate AB=CD (black arrows) correction’.

H4 AB=CD traders likely reduced risk to breakeven and banked partial profits at 107.22, with follow-through buying expected to reach the 61.8% Fibonacci retracement ratio from 107.57. Before reaching the latter, a retest at May’s opening level from 107.12 could come to fruition, a move that may provide a platform for additional longs to 107.57.

USD/CAD bulls found fresh legs after piercing 1.3550 as waning WTI prices weighed on the Canadian dollar. The move took H4 back above July’s opening level at 1.3574 and to within touching distance of 1.36. Clearing the round number today throws Quasimodo resistance at 1.3670 in the pot as a potential ceiling, followed by the 1.37 handle.

Technical action on the daily timeframe witnessed a recovery form from the upper edge of a breached falling wedge pattern (1.3686/1.3504) into the second half of last week, merging with the 200-day SMA (1.3504). Take-profit targets out of a falling wedge pattern can be measured by taking the base value and adding this figure to the breakout point (black arrows), which as you can see in this case, meets closely with resistance at 1.3807, followed by another layer of resistance at 1.3867.

Owing to daily structure, and lack of resistance on the weekly timeframe, traders are still likely watching for a decisive H4 close to form above 1.36, seeking bullish themes towards at least H4 Quasimodo resistance at 1.3670 and 1.37.

From the weekly timeframe, we can see price recently dipped through support at 0.9447 (now a serving resistance), chalking up a third consecutive weekly decline. The break south has likely caught the attention of sellers, targeting Quasimodo support plotted at 0.9255.

The daily timeframe offers a similar picture to the weekly chart at the moment, underlining bearish themes south of the recently penetrated weekly support at 0.9447, targeting 0.9255.

USD/CHF bulls, as you can see, continue to defend 0.94 on the H4 chart, withstanding an energetic pop to lows at 0.9384 Friday and another attempt at lower levels Monday. Assuming buyers uphold position here, resistance at 0.9444 could make an appearance, a level aligning closely with a 50.00% retracement ratio at 0.9447 and weekly resistance, also at 0.9447.

Some intraday buyers may still feel bullish positions off 0.94 could be worth a shot. Upside targets, as underscored above, can be found just south of 0.9450, an area containing weekly resistance at 0.9447. The 0.9450 neighbourhood, therefore, given the higher timeframes, is also likely viewed as a location active sellers could make an appearance from if tested.

If, on the other hand, higher timeframe sellers head for deeper waters before H4 shakes hands with 0.9450, it is likely a breach of 0.94 will materialise, re-opening the possibility of moves to 0.9324 on the H4, a Quasimodo support. 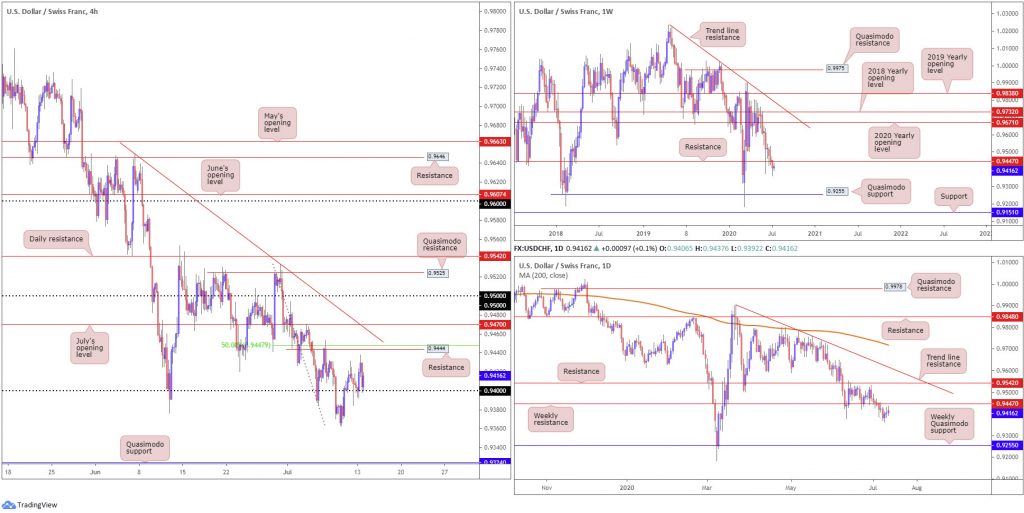 Since June 15, price action on the daily timeframe has ranged between the 200-day SMA (orange – 26243) and support from 24934. The aforementioned SMA remains in the spotlight for the time being, restraining buyers on Monday and consequently producing a shooting star candlestick pattern. A break higher, however, not only helps confirm upside strength on the weekly timeframe, it points to a probable run towards daily resistance from 27640.

The technical story on the H4 timeframe shows yesterday’s movement whipsawed through resistance at 26403, and tested highs at 26647. This has shined the spotlight back on July’s opening level at 25761 and nearby trendline support, taken from the low 24881. Above 26403, on the other hand, the 26787 high resides close by, with a break exposing resistance coming in at 27360.

The shooting star candle pattern formed on the daily timeframe will likely be a welcomed (bearish) sight for some traders today, targeting daily support coming in at 24934. This will, of course, have you go up against weekly directional flow (currently north off support).

In terms of the H4 timeframe, the technical landscape indicates further losses could be in store, targeting July’s opening level at 25761 and nearby trendline support, taken from the low 24881.These levels, given the weekly timeframe, could be somewhere we see buyers attempt to make an appearance. 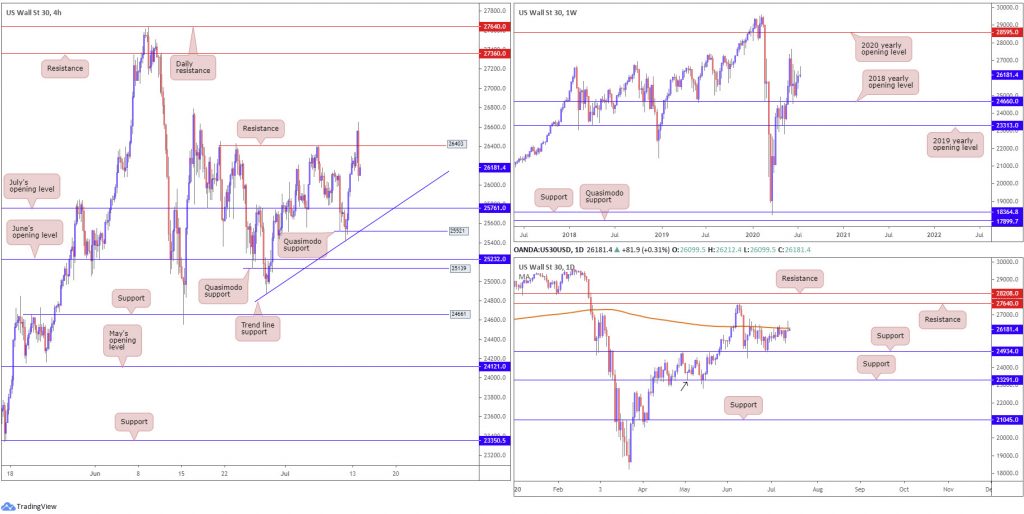 From the weekly timeframe, bulls elbowed above Quasimodo resistance at 1787.4 (now a serving support) in recent trading. In line with the underlying trend, the break higher has perhaps laid the foundation for continuation buying to resistance stationed at 1882.7. Also of interest on the weekly timeframe is a potential ascending wedge pattern, forming between 1451.4/1703.2.

With higher timeframes recently conquering resistance and, at least for the time being, holding firm, H4 support at 1791.7/H4 trend line support likely remains of interest as a reversal zone today.

As for upside targets, traders may have the 161.8% H4 Fibonacci extension point at 1815.3 eyed as the initial take-profit zone, followed by H4 Quasimodo resistance at 1822.8. 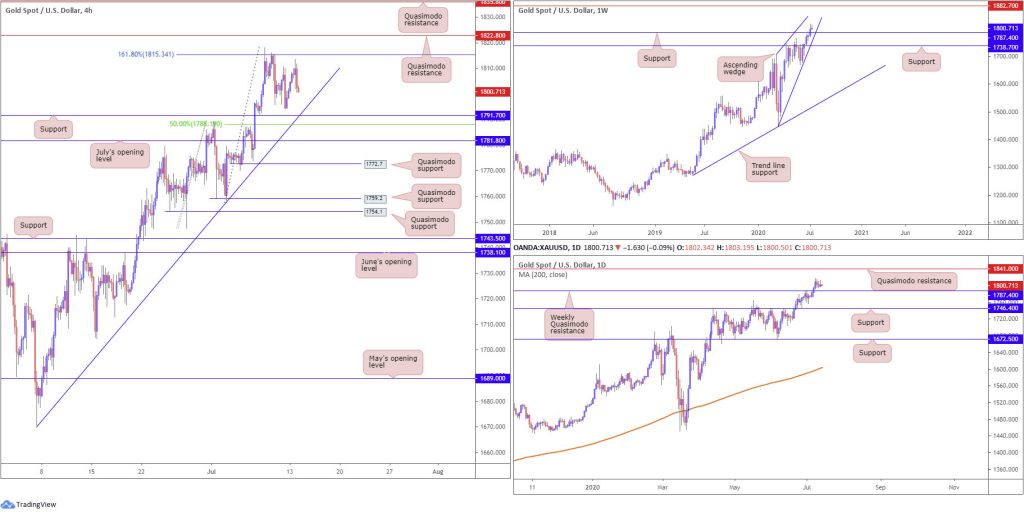