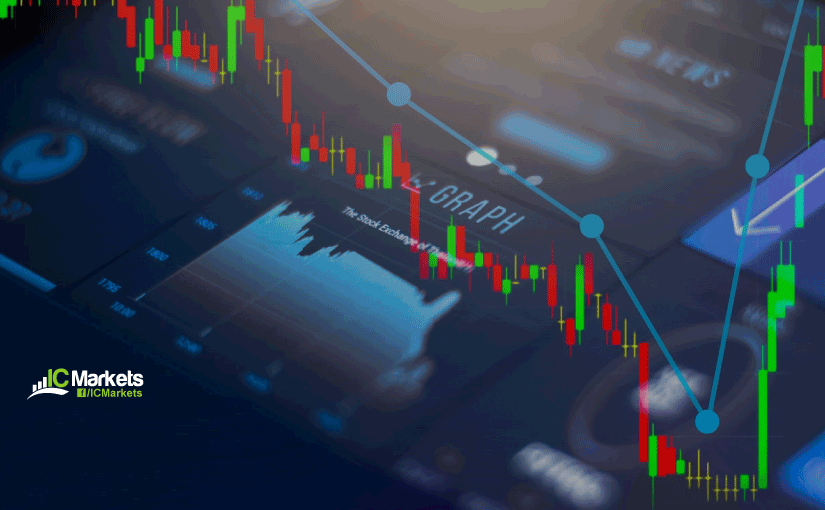 Despite having dipped a toe in waters above the 94.00 handle, the US dollar index resumed its downward decline Wednesday and overthrew 93.50. With the euro forming the largest component of the index, EUR/USD reclaimed Tuesday’s losses on Wednesday and established support off 1.17 and the 1.1723 base. The next upside targets can be seen at a Quasimodo resistance taken from 1.1793, closely shadowed by the 1.18 handle.

Technical structure on the higher timeframes has weekly price seeking levels above Quasimodo resistance at 1.1733. However, technicians are unlikely to consider the Quasimodo formation consumed until we take out the 1.1815 September 24 high (2018), which if it comes to pass shines the spotlight on the 2018 yearly opening level at 1.2004.

Amidst further USD decline, the British pound made headway north of H4 support at 1.2939 (a prior Quasimodo resistance) and cornered the key figure 1.30 Wednesday, a level sited under H4 Quasimodo resistance at 1.3017. This, as you can see, witnessed the pair record a ninth consecutive daily gain.

Weekly flow is seen overthrowing long-term trend line resistance, extended from the high 1.5930, consequently exposing the 127.2% Fibonacci extension point at 1.3043 as the next upside hurdle. This comes after a decisive breach of the 2019 yearly opening level at 1.2739 last week.

The recent trend line resistance break on the weekly timeframe, despite the 1.3514 December 9 high (2019) still intact (a break of here also signals trend change to the upside), may have long-term traders consider long positions.

The daily ABCD (black arrows) completion around 1.2982, coupled with the key figure 1.30 and H4 Quasimodo resistance at 1.3017, could put forward a base of resistance today.

Breaking 1.3017, nonetheless, leaves breakout traders in a precarious situation, given the 127.2% Fibonacci extension point at 1.3043 potentially offering resistance, based on the weekly timeframe. With that being said, a H4 break of 1.3017 and test of 1.3043, followed by a H4 close back under 1.30, could serve as an interesting countertrend sell signal (a fakeout setup due to buy-stop liquidity north of 1.30). 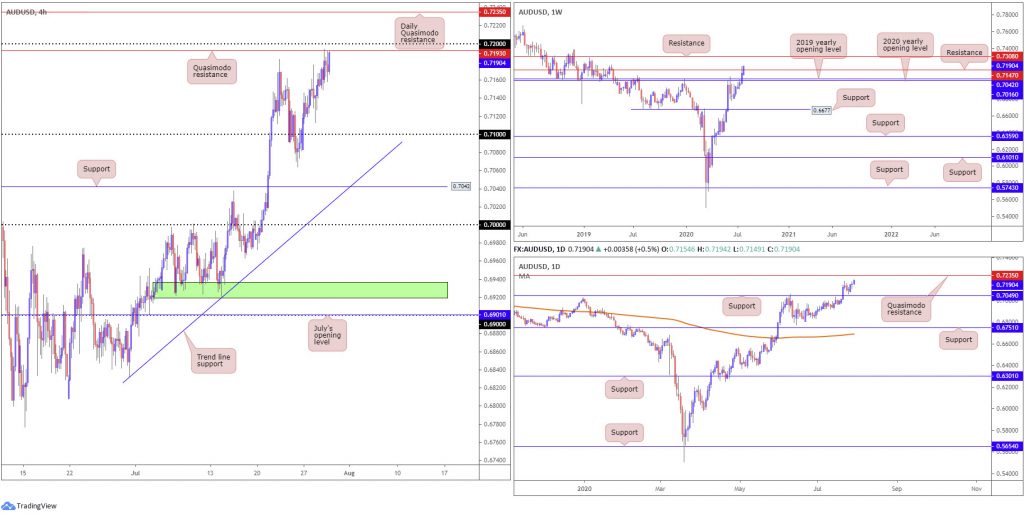 Eking out its fifth daily decline Wednesday, in keeping with the US dollar index swallowing 93.50, USD/JPY cautiously absorbed the 105 handle and has perhaps drew attention towards H4 Quasimodo support coming in at 104.59. While probing levels under 105 likely activates breakout sellers (and trips protective stop-loss orders from those attempting to fade the round number), a recovery back above the figure is likely to take aim at Quasimodo resistance from 105.46.

Interestingly, analysis on the higher timeframes demonstrates price to be closing in on weekly support at 104.70, ten pips above the aforementioned Quasimodo support on the H4 timeframe. What’s also notable around 104.70 is the formation of a daily ABCD bullish pattern (red arrows).

Assuming we remain south of 105, the 104.70 weekly support and H4 Quasimodo support at 104.59 will be eyed. This is an area traders may expect buyers to make a show, given the additional daily ABCD completion, therefore forms an intraday downside target for sellers short sub 105.

Recovering above 105, as underlined above, could stretch price to H4 Quasimodo resistance at 105.46. Despite holding limited confluence, aside from forming alongside the immediate trend, this is still a base sellers could display interest in. 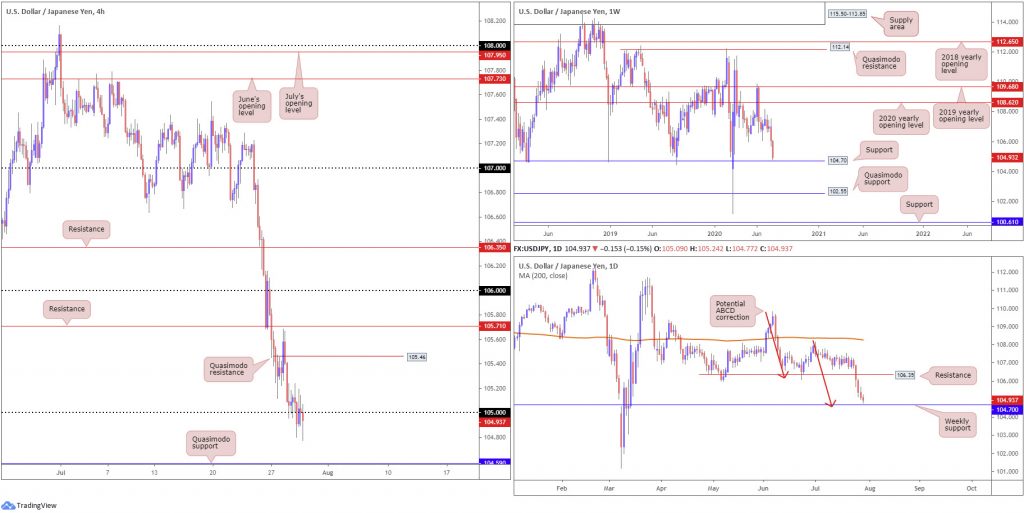 The US dollar ended Wednesday a shade lower against the Canadian dollar, though remains buoyed by Quasimodo support at 1.3343, based on the H4 timeframe. WTI faded session highs at $41.55 a barrel, weighing on the Canadian dollar (helping to support USD/CAD), while on the other side of the table the US dollar index plunged through 93.50.

Traders will also acknowledge south of 1.3343 we’ll have candles possibly drive towards 1.33.

Multi-timeframe analysis reveals structural action on the daily timeframe has support in sight at 1.3303, a level bringing forward an interesting history as support/resistance since early 2016. Support, by way of the 2017 yearly opening level, from 1.3434 on the weekly timeframe recently lost grip. Below 1.3434, channel support, taken from the low 1.2061, can be viewed as the next potential floor.

Exploring territory beneath 1.3434 on the weekly timeframe reflects a bearish tone in this market, despite the primary trend facing north since late 2017 (within a weekly ascending channel [1.2061/1.3661]).

On the basis we have been unable to get things above 1.34 off H4 Quasimodo support at 1.3343, a break of the latter could be seen today, which may have intraday sellers take advantage of the space between the 1.3343 and 1.33.

In addition to the above, a bullish reaction from daily support at 1.3303 could still be in the offing, joined with the 1.33 handle on the H4.

Renewed upside invited a rebound within the lower limits of a particularly interesting area of H4 support at 26297/26455. Buyers out of the area will likely have eyes on 26717ish as an initial upside hurdle, with a break here exposing 26172 peaks, followed by resistance at 27360.

Since climbing above the 200-day SMA (orange – 26245) on July 14, daily price has been trying to gain a toehold and approach resistance at 27640. As you can see, price action came within touching distance of retesting the SMA as support yesterday. 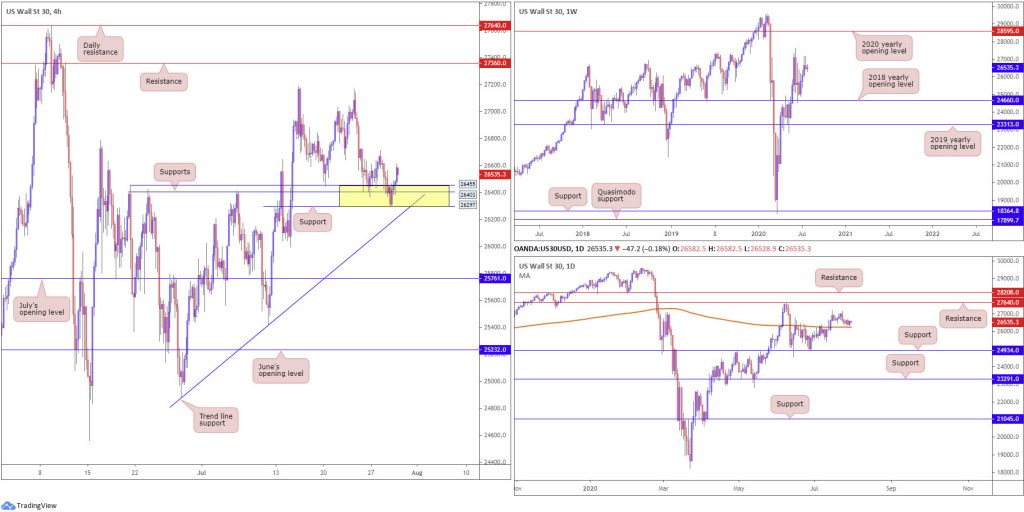 The price of gold, in $ terms, received an additional boost Wednesday as the US dollar index navigated under 93.50. As you can see from the charts, XAU/USD came within shouting distance of challenging all-time peaks at 1981.3, following Tuesday’s decisive rebound from the previous all-time high at 1921.0 (now a serving support).

Upside targets remain at the recently formed all-time peak at 1981.3, with a decisive break exposing the widely watched 2000.0 base.

Further buying remains likely in this market, with buyers potentially targeting 1981.3, followed by the 2000.0 level.