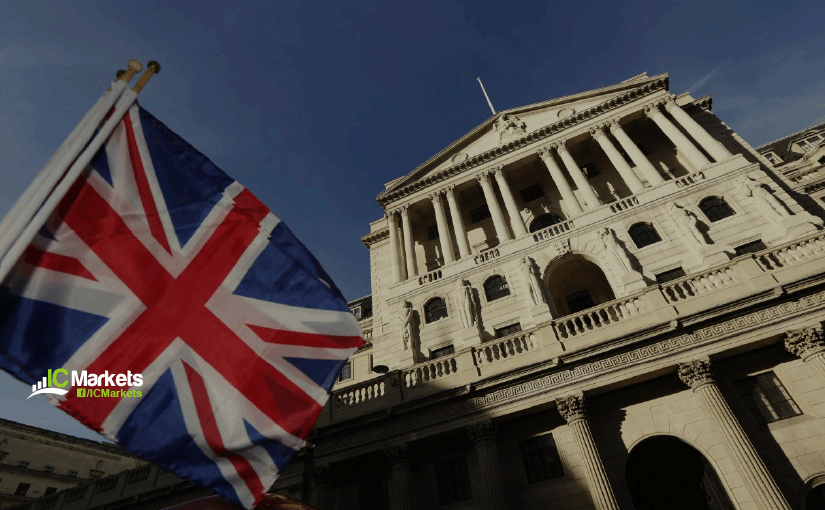 Euro bulls remained on the offensive Wednesday as the US dollar index, or DXY, continues its descent, tackling the 101.00 handle.

Asia and early Europe witnessed EUR/USD establish support off 1.08, with 1.0850 hampering upside attempts (seen clearer on H1). It wasn’t until a mild fakeout through 1.08 to lows of 1.0784 amid early US hours, likely running a large portion of sell stops, did the bulls kick things into higher gear and overwhelm 1.0850, pushing for highs at 1.0883. 1.09 remains the next upside target on the H4 scale, with a break exposing the widely watched key figure 1.10. For those who follow the relative strength index (RSI), the value crossed 50.00 and appears set to make a run for overbought terrain.

Since bottoming a few points north of Quasimodo support at 1.0630, albeit following a somewhat indecisive start by way of back-to-back indecision candles, daily price echoes a healthy bid – seen poised to approach resistance coming in at 1.0925 after clearing its fourth consecutive daily gain. On the other side of the coin, though, weekly flow is seen shaking hands with the 2016 yearly opening level at 1.0873.

While dollar shorts continue to prop up the euro, traders are likely looking for buying opportunities within the current recovery. However, the combination of weekly resistance at 1.0873, daily resistance at 1.0925 and the 1.09 handle applied to the H4 might be enough to take the wind out of the euro’s advance and tempt moves lower.

As a result, the green area on the H4 timeframe between 1.0925/1.0873 may house active sellers and force a dip to 1.08. Conservative traders will likely seek additional candlestick confirmation before pulling the trigger; round numbers (1.09) are prone to whipsaws due to the amount of orders the levels attract. 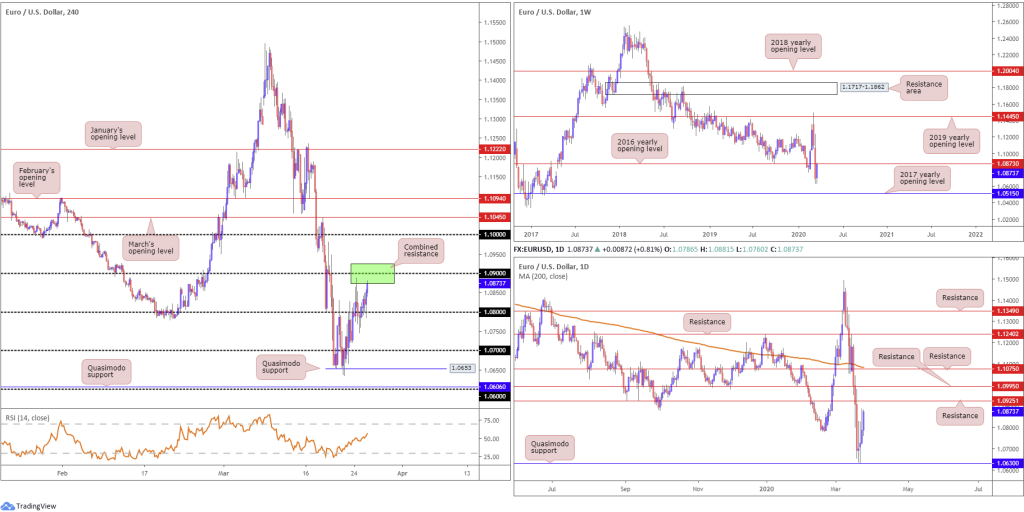 Manoeuvred amid dollar weakness, GBP/USD H4 chart studies reveals a volatile hammer candlestick formation made an appearance Wednesday (considered a bullish signal at troughs), shattering sell stops south of 1.18 and likely under 1.17, before rising to 1.19. Those long the aforementioned candlestick pattern likely welcome a H4 close north of 1.19 (possibly as a prompt to reduce risk to breakeven), potentially setting the stage for 1.20.

However, the outlook for higher prices dim on the higher timeframes. Weekly resistance made a showing at 1.1904, after price recently bottomed from historic lows at 1.1409, levels not seen since the 1980s. On top of this, movement on the daily timeframe crossed swords with trend line resistance, taken from the high 1.3380, that’s shadowed closely by resistance at 1.2014.

Bids off 1.18 are likely to be hindered today by the said higher-timeframe obstacles – some traders will, therefore, consider reducing risk to breakeven.

In the event we confront higher-timeframe reasoning, the widely watched figure 1.20 is in the offing on the H4, as is 1.21, which brings with it appealing Fibonacci confluence from two 127.2% Fibonacci extension points at 1.2118 and 1.2080.

Despite enthusiastic upside throughout Asia and into the early hours of Europe Wednesday, refreshing weekly highs at 0.6073, AUD/USD staged a decisive pullback into London amid a temporary peak in market sentiment, hindering upside for risk-sensitive currencies like the Australian dollar.

H4 price glided to levels south of 0.60, likely tripping sell stops and clocking lows at 0.5931, perhaps inviting an approach to 0.59. What’s also notable from a technical perspective on the H4 timeframe is a potential ABCD correction, terminating at 0.6169. Extension beyond this level will likely land price at 0.62, with a break of this base highlighting an interesting Fibonacci combination between the 0.63 handle, a 161.8% Fibonacci extension level at 0.6279 and a 61.8% Fibonacci retracement at 0.6237.

Price action on the higher timeframes has weekly flow testing channel support-turned resistance, taken from the low 0.6744, stationed just south of resistance plotted at 0.6101. Interestingly, daily flow chalked up a shooting star candlestick pattern – considered a bearish signal at peaks – just ahead of weekly resistance mentioned above at 0.6101.

Having noted the appearance of weekly channel support-turned resistance, the move through 0.60 will not be a surprise for most price action traders.

Coupled with the formation of a daily shooting star candlestick configuration, 0.59, in the event this level is tested, is unlikely to retain much life as a support. As such, a retest at the underside of 0.60 today offers traders a platform for possible shorting opportunities towards 0.59 and quite possibly beyond given the room seen to move lower on the higher timeframes.

USD/JPY lacked direction Wednesday, despite a near-1% decline seen in the US dollar index and a reasonably upbeat move across the US equity space. The pair wrapped up the session, confined within a narrow trading range at weekly peaks 111.71, consequently chalking up another doji indecision candlestick pattern on the daily timeframe.

In light of yesterday’s lacklustre performance, much of the following will echo points put forward in recent analysis.

Across the page on the H4 timeframe 111 is disfigured, suffering a number of whipsaws in both directions, though currently remains supportive. Resistance at 111.67 made an appearance in recent trade, closely shadowed by the 112 handle. In addition, we can see the relative strength index (RSI) producing bearish divergence out of overbought waters.

According to chart studies on the higher timeframes, we are perhaps heading for the 112 neighbourhood, with the possibility of a whipsaw emerging through the said round number to weekly resistance at 112.14. As such, setting alerts around 112 might be an idea.

A fakeout through 112 that draws in weekly Quasimodo resistance at 112.14, shaped by way of a H4 bearish candlestick signal, would likely be sufficient to draw attention and push for lower ground, targeting 111 as the initial downside level. 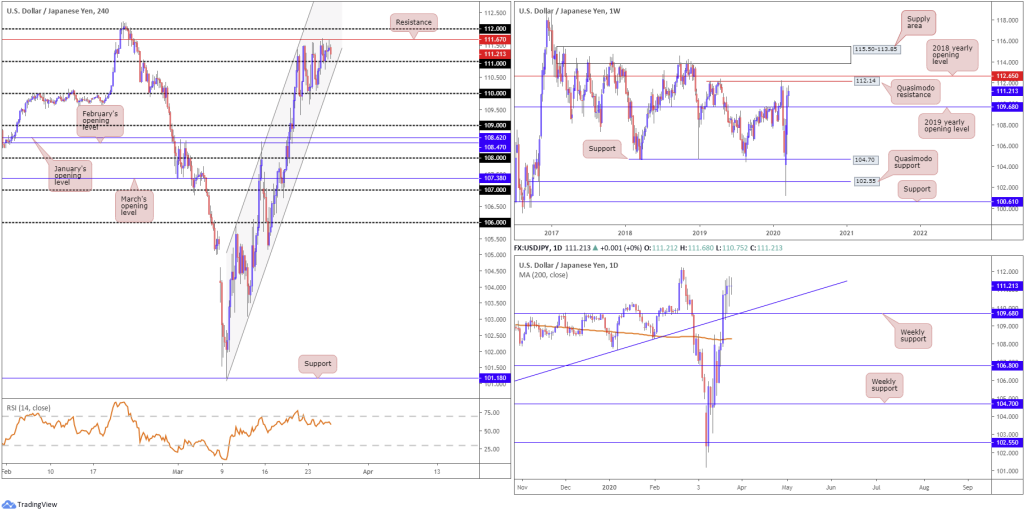 Longer-term action on the weekly timeframe has price retreating south of the January 18th high at 1.4690 (2016), poised to potentially grasp channel resistance-turned support, extended from the high 1.3661.

Price action on the daily timeframe recently tested the underside of Quasimodo resistance at 1.4606, forcing the couple through support coming in at 1.4292 (now a serving resistance), which shines the spotlight on support at 1.4000.

A closer examination of price movement on the H4 timeframe had intraday flow dethrone a number of key psychological figures Wednesday, including 1.42. South of here, support is seen around the 1.41 region, followed by support at 1.4082. Traders will also note that beneath this point, an interesting area of support resides between 1.3961, a 50.0% retracement at 1.3983, the 1.40 handle, a 127.2% Fibonacci extension point at 1.4020 and a potential ABCD (black arrows) completion around 1.4040 (green).

1.4150ish is an expected plot of support, given this is the location weekly channel support merges with.

In the event we push through 1.4150, bearish scenarios are an option, targeting 1.3961/1.4040. It is from here, traders will likely cover any short sales and seek long opportunities, expecting moves to form north of 1.41.

Recording its fourth successive daily loss, USD/CHF, weighed by the dollar index navigating lower ground, glided to lows at 0.9754 Wednesday, though remained within the walls of the prior day’s range between 0.9847/0.9718.

Despite several attempts to hold 0.98 yesterday, the psychological boundary eventually gave way into US hours. This firmly draws the limelight towards 0.97. In addition, traders will also note the potential AB=CD correction (black arrows) that terminates beneath the said round number at January’s opening level from 0.9671, set just ahead of March and February’s opening levels at 0.9627 and 0.9636, respectively, along with a 38.2% Fibonacci ratio at 0.9628.

The view from the weekly timeframe this morning reveals price action lurks a touch off support formed by way of the 2018 yearly opening level at 0.9744, after fading trend line resistance, extended from the high 1.0226. A push through 0.9744 could pave the way south to support at 0.9447, whereas moves higher has Quasimodo resistance in view at 0.9975.

A closer reading of price action on the daily timeframe has the candles attempting to maintain a presence off trend line resistance-turned support, taken from the high 1.0023. Note we have now also crossed beneath the 200-day SMA (orange – 0.9813). Another layer of Quasimodo resistance is seen to the upside at 0.9978; a break lower, however, can see the unit find support at 0.9644.

H4 price action reveals an interesting area of support between 0.9627/0.9671, which houses the daily support underlined above at 0.9644 within. Bringing in this H4 zone, however, entails a sizeable whipsaw through the 2018 yearly opening level at 0.9744.

Longs out of 0.9627/0.9671 will likely seek a H4 close above 0.97 before reducing risk to breakeven. Conservative traders may also opt to wait for additional candlestick confirmation before pulling the trigger.

The yellow metal was somewhat subdued Wednesday, unable to capitalise on dollar weakness.

Technically speaking, H4 price is facing off with supply at 1650.3-1633.3 (green), formed within a tight bullish flag pattern (1643.1/1601.7) – generally considered continuation patterns. Further dips from here could see the unit shake hands with February and March’s opening levels at 1593.0 and 1591.7, respectively. A breakout higher, one that engulfs the said supply, could land Quasimodo resistance in the net at 1667.7. It might also interest some traders to note the relative strength index (RSI) is seen fading overbought waters.

With upside free of resistance on higher timeframes, a retest at February and March’s opening levels from 1593.0 and 1591.7 is likely of interest today. Combine these levels with a breakout above the current H4 bullish flag pattern, this will likely encourage buying, with noted higher-timeframe resistances in sight as ultimate targets.