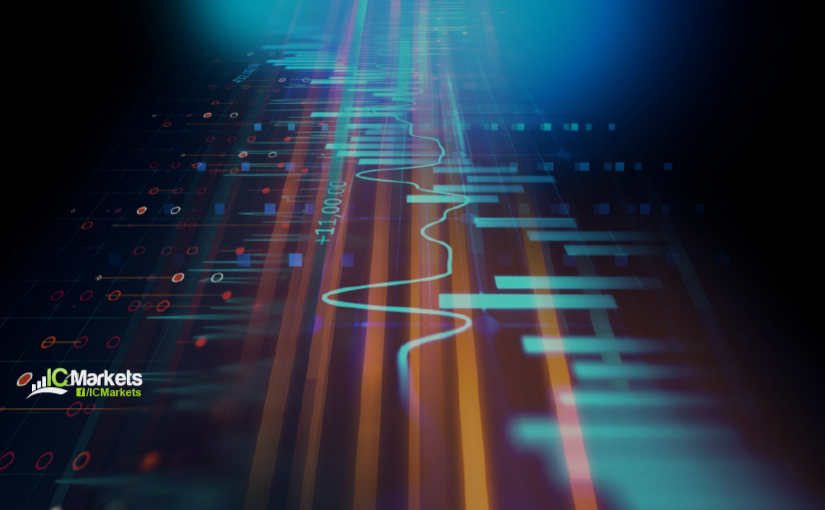 In the shape of back-to-back shooting star candlestick patterns, price movement is seen fading long-standing trend line resistance, taken from the high 1.2555. Consequently, the 2020 yearly opening level at 1.1222 is under fire.

Since the beginning of June, price has been languishing south of resistance at 1.1349.

Europe’s shared currency settled Friday little moved, with downside attempts contained at 1.12. Quasimodo support at 1.1185 remains in the crosshairs south of the round number, as does the 127.2% Fibonacci extension point at 1.1150 and 50.00% retracement ratio at 1.1146. Overhead, however, chart studies indicate an absence of obvious resistance until shaking hands with the 1.13 handle, closely shadowed by Quasimodo resistance at 1.1340.

In light of recent support derived from 1.12 on the H4, buyers have likely tucked protective stop-loss orders under the round number.

This unlocks the door to a possible fakeout scenario this week, involving a dip through 1.12 into H4 Quasimodo support at 1.1185. Not only would this move trip sell-stop liquidity below 1.12, it would drag in any willing buyers off the Quasimodo formation. A H4 close back above 1.12 off 1.1185, therefore, would likely be a welcomed sight for buyers, targeting 1.13. 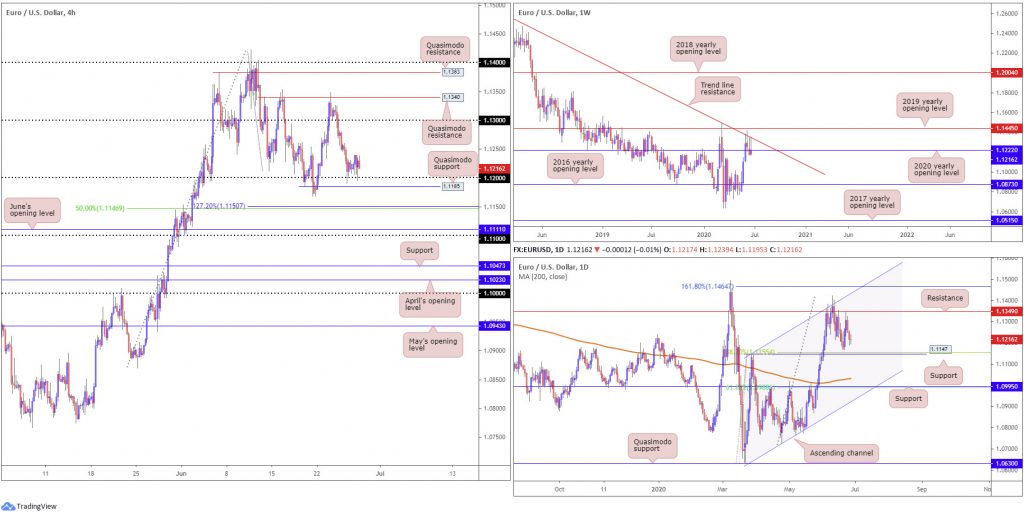 Navigating deeper waters from here this week invites an approach to Quasimodo support at 1.2163.

The daily timeframe, meanwhile, has price action stationed beneath trend line support-turned resistance, taken from the low 1.1409, following a mid-week retest. The route lower appears one-way towards support coming in at 1.2014, sited just south of the 1.2075 May 18 low. Before reaching this far south, though, weekly Quasimodo support must be absorbed at 1.2163.

Friday witnessed the US dollar index extend gains to highs at 97.68 as US equities tumbled. GBP/USD explored territory sub 1.24 and April’s opening level at 1.2395 heading into US hours, leading to a break of trend line support, extended from the low 1.2075.

In the hours leading up to the close, a break of June’s opening level at 1.2345 also materialised, perhaps clearing the rubble for 1.23 to make an entrance this week.

With the weekly timeframe pointing to the likelihood of further selling over the coming week, targeting 1.2163, bearish scenarios south of June’s opening level at 1.2345 on the H4 and on a break of 1.23 may be of interest. Conservative traders will likely seek a retest at the underside of the aforesaid levels before committing.

It might also interest traders to note that just above the said resistances we have a 61.8% Fibonacci retracement ratio at 0.7128 (green). In terms of support, crosshairs are perhaps fixed on 0.6677.

From the daily timeframe, Quasimodo resistance at 0.7049 is in sight, merging closely with trend line support-turned resistance, taken from the low 0.6670. Attention on this timeframe also remains at support coming in from 0.6751. Interestingly, lurking beneath here we also have the 200-day SMA (orange – 0.6664), located close by weekly support mentioned above at 0.6677.

The Australian dollar finished a shade lower against the buck Friday, pressured amid a DXY bid to highs at 97.68. Structurally, we remain flagging sub 0.69, with downside currently contained around 0.6850ish.

According to technical research, in particular the breach of 0.69 to the downside, sellers may have the upper hand heading into the new week.

A retest at the underside of 0.69 (red arrows), one that preferably holds by way of a H1/H4 bearish candlestick pattern, would likely appeal to sellers this week, targeting the 0.68 neighbourhood as an initial take-profit zone. Aggressive traders, on the other hand, will already likely be short the break of 0.69, with protective stop-loss orders possibly tucked above 0.6922 (blue arrow), the top edge of a local supply resting above 0.69. 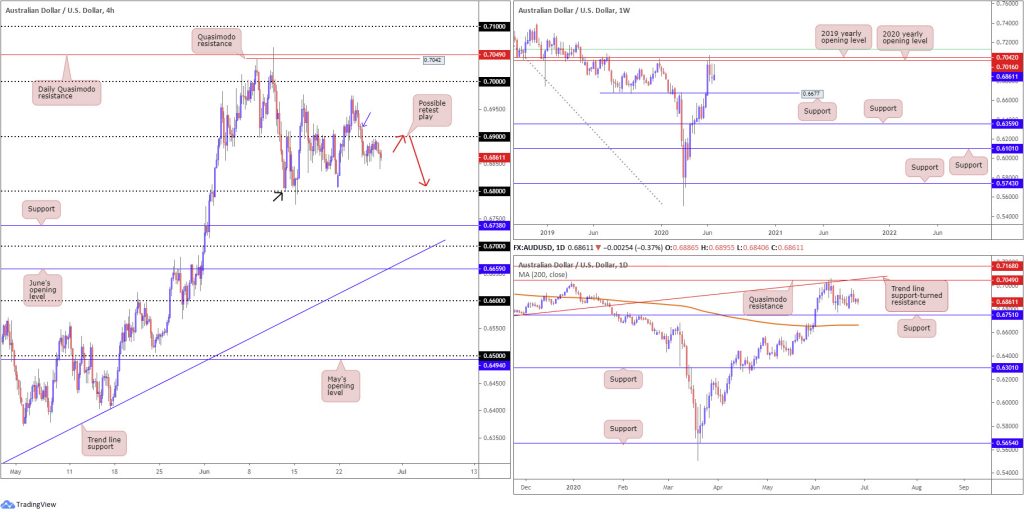 While the recent recovery, a move that snapped a two-week bearish phase, could promote additional bullish sentiment this week, another school of thought could have price swing lower, taking aim at support drawn from 104.70.

Quasimodo support at 106.35 nudged its way into the limelight mid-week and delivered a healthy bullish candle. Upside momentum somewhat waned in the second half of the week, nonetheless, unable to determine direction.

Despite the lack of enthusiasm, the possibility of further buying remains, with crosshairs fixed on the 200-day SMA (orange – 108.37) as an upside objective this week. Failure to extend gains may see 106.35 breached and support at 105.05 call for attention.

Friday had buyers strengthen their grip going into US hours, regaining a footing above 107 as well as May’s opening level at 107.12 and reclaiming earlier losses, despite US equity benchmarks plunging into negative territory.

Technically, the move back above 107 may persuade buyers to attempt an approach towards Quasimodo resistance at 107.57, located just south of June’s opening level at 107.73. Above here, 108 calls for attention, with a violation shifting focus to the 200-day SMA highlighted on the daily timeframe (108.37).

Similar to Friday’s outlook, a retest at 107.12/107 may come to fruition on the H4, setting up a case for a run to Quasimodo resistance at 107.57 and June’s opening level at 107.73. Conservative traders may seek additional confirmation before engaging with the area, owing to the threat of a fakeout occurring through 107 – common around psychological numbers.

Should we trek back under 107 this week, however, this could imply a lack of interest off Quasimodo support at 106.35 on the daily timeframe and throw the 106 handle into the pot as a possible support target. Bearish themes beneath 107, therefore, could also be on the table.

The week put forward additional gains, adding more than 70 pips. This follows the beginning of June deriving impetus from the 2017 yearly opening level at 1.3434.

In the event recent action sponsors further buying this week, a potential hurdle to be aware of falls in by way of the 2016 yearly opening level at 1.3814, with follow-through buying likely to try and tackle a dense block of supply between 1.4190/1.3912.

After finishing Wednesday marginally outside the upper limit of a falling wedge pattern (1.3686/1.3504), neighbouring resistance at 1.3653 welcomed price action Thursday in the shape of an indecision candle.

Friday, as you can see, overthrew the aforementioned resistance, scoring highs at 1.3715 and potentially setting the stage for a continuation move to 1.3807.

Take-profit targets out of falling wedges can be measured by taking the base value and adding this figure to the breakout point (black arrows), which as you can see in this case, converges closely with the next daily resistance at 1.3807.

Friday witnessed USD/CAD gain traction, fuelled on the back of a DXY bid and waning oil prices.

1.37 made an appearance into the later stages of the session.

Both weekly and daily timeframes exhibit scope to explore higher levels this week, and therefore point to a break of 1.37 to the upside.

A H4 close above 1.37, in light of the higher timeframe’s position, may have breakout buyers jump on board. Conservative traders may at least want to see a retest at the round number occur before engaging. Irrespective of the entry technique, the upside target falls in at the H4 resistance area from 1.3822/1.3780.

In view of the confluence around 1.3822/1.3780, both on the H4 and higher timeframes, not only does this make for a logical target for longs north of 1.37 this week, it also puts forward a tidy resistance zone to work with for possible shorting opportunities.

Despite longer-term flow recently engaging with support at 0.9447, buyers continue to display a lack of enthusiasm.

The initial upside target out of the daily AB=CD pattern, traditionally speaking, can be found at the 38.2% Fibonacci retracement ratio at 0.9580 (derived from legs A-D), positioned above resistance at 0.9542, which, as you can see, has so far done a superb job in holding back buyers.

In the event we overrun 0.9542 and also 0.9580 we could, according to traditional measures, cross swords with the next AB=CD target at 0.9705, the 61.8% Fibonacci retracement ratio, also taken from legs A-D. This implies a push above trend line resistance, taken from the high 0.9901.

Wednesday, as evident from the H4 chart, staged a stronger-than-expected rebound from an AB=CD formation (black arrows) at 0.9440 along with weekly support at 0.9447.

Despite the dip from 0.95ish, sellers appear reluctant to commit beyond 0.9470. Terrain above the round number points to Quasimodo resistance at 0.9525 and daily resistance underlined above at 0.9542, along with a 61.8% Fibonacci retracement ratio at 0.9545.

Weekly support at 0.9447 remains a key level in this market. Although the base has so far failed to generate anything considerable, overlooking this level could prove a mistake. Therefore, until this level surrenders, bullish strategies may be the way forward for the time being.

A break of 0.95 may be on the cards, attracting breakout buying to H4 Quasimodo resistance at 0.9525 and daily resistance at 0.9542, followed by a possible pop to the 38.2% Fibonacci retracement ratio at 0.9580 on the daily timeframe (the initial take-profit target out of the daily AB=CD pattern). 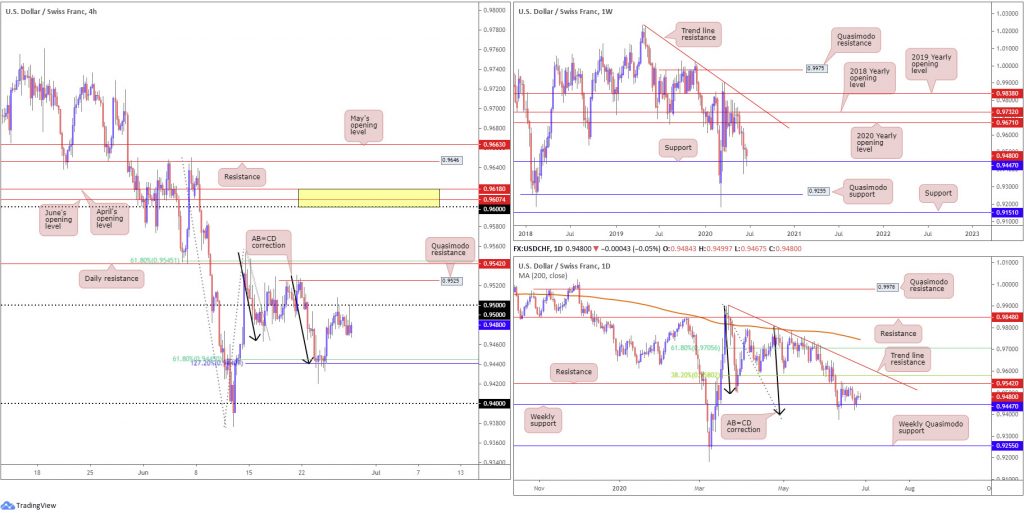 Dipping a toe in waters south of 24934 this week may see support at 23291 call for attention. Another key observation is a potential AB=CD correction (blue arrows) at 23553.

March’s opening level at 25823 was left unchallenged Friday as trend line support, extended from the low 22803, along with June’s opening level at 25232, gave way Friday. This potentially cleared orders to zero in on support at 24661, followed by a possible ABCD pattern (black arrows) at 24471.

H4 price shows room to push south of June’s opening level at 25232 this week, targeting support at 24661. This may interest intraday sellers.

H4 support at 24661, a level closely converging with a H4 ABCD pattern and weekly support (2018 yearly opening level) at 24660, provides not only a downside target for shorts under 25232, but also a platform to consider for possible buying opportunities this week.

1739.6, therefore, could serve as support going forward, with another Quasimodo resistance at 1787.4 also on the radar.

Resistance at 1747.0 gave way in early trade last week, laying the foundation for an extension to the weekly Quasimodo resistance mentioned above at 1787.4.

Notably from the daily timeframe, we can see Friday retested 1747.0 as support in the shape of a hammer candlestick pattern. This presents a potential bullish vibe as we head into the new week.

Mid-week faded a clear-cut H4 ABCD correction that topped around 1780.0ish (black arrows), with Friday aggressively spiking to lows just ahead of support at 1744.5.

What’s also interesting is the recently engulfed weekly Quasimodo resistance at 1739.6 could, as highlighted above, serve as support going forward – this level merges closely with our 38.2% Fibonacci retracement on the H4 at 1736.7.

As for upside targets, weekly Quasimodo resistance at 1787.4 remains prominent on all three timeframes right now.

Traders short the H4 ABCD correction, as highlighted above, will likely have eyeballs on the 38.2% H4 Fibonacci retracement at 1736.7 as an initial target.

The threat of further buying on the higher timeframes, however, poses a real threat to H4 sellers. This is evident from daily support recently making its presence felt and price action printing a bullish candlestick signal (hammer pattern). As a result, along with the fact the overall trend has faced north since 2016, this could be enough to draw in additional buyers this week (with most basing entry and exit levels on the daily hammer pattern), targeting weekly Quasimodo resistance at 1787.4 as an initial upside base.