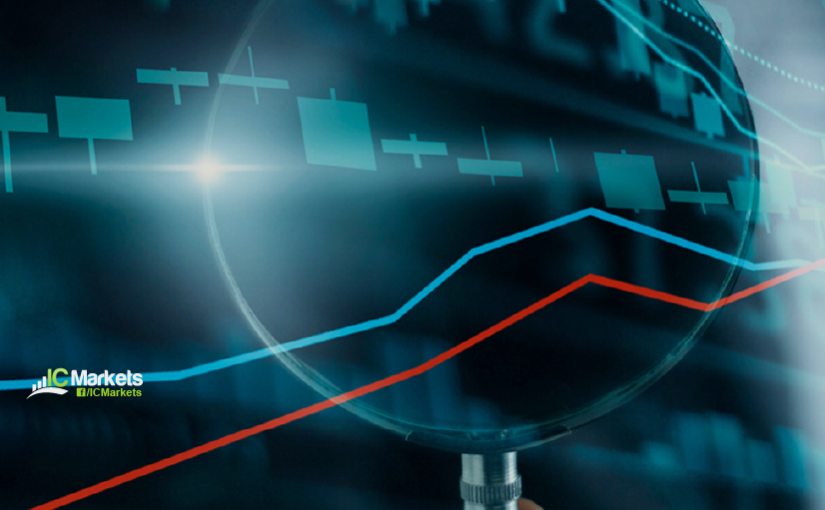 July, as you can see, witnessed vigorous upside, movement that ousted trend line resistance, taken from the high 1.2555, and the 2019 yearly opening value at 1.1445.

Consequently, 1.1733 and 1.2004 remain two prominent areas worth monitoring this week.

Passing 1.2002 shifts focus to the weekly Quasimodo resistance stated above at 1.2092, whereas dipping sub 1.1733 on the daily scale welcomes channel resistance-turned support, extended from the high 1.1147.

Candlestick supporters will also acknowledge price movement pencilled in a hammer candlestick pattern a few pips ahead of the weekly support level on Thursday (bullish indication), though Friday lacked follow-through momentum. An opposite picture is visible on the DXY’s daily timeframe, generating a shooting star candle pattern on Thursday with limited downside seen thereafter.

Europe’s single currency entered an indecisive phase Friday, following Thursday’s move higher, which as we know finished in the shape of a daily hammer candlestick formation.

Trading north of 1.18, Friday directed focus to trend line resistance, extended from the high 1.2010. Buyers, as you can see, failed to muster enough strength to overthrow the trend line, suggesting a retreat to 1.18 this week. Absorbing selling pressure here, nevertheless, moves Quasimodo resistance at 1.1889 in sight, as well as the psychological band 1.19 and a 61.8% Fibonacci retracement ratio at 1.1906.

Reclaiming a portion of the prior week’s near-500-pip decline and snapping a two-week bearish phase, technical studies project room to advance as far north as the 2020 yearly opening value at 1.3250.

Crossing through 1.2739 this week, however, unseals a potential bearish scenario, targeting the 1.2251 June 29 low, closely shadowed by Quasimodo support priced in at 1.2163.

Four out of five sessions concluded in positive territory last week, deriving impetus from support at 1.2769, fixed just ahead of the 200-day SMA (orange – 1.2729).

Price, as you can see, topped a few pips beneath resistance at 1.3017, with Friday pulling across a bearish close. Reaching for higher territory this week shines the spotlight on resistance around 1.3200, yet further dips elbows 1.2769 back into view.

Last week’s technical writing highlighted the possibility of resistance emerging from the 1.30 handle, a widely watched psychological level. What was also technically appealing here was additional H4 resistance at 1.3009 and daily resistance seen at 1.3017.

As we transition into a fresh week, 1.3017/1.30 remains in focus.  Any sustained move above the area positions resistance at 1.3064 on the hit list, a prior Quasimodo support level, and August’s opening value at 1.3078. Cutting through 1.29, on the other hand, throws 1.28 into the pot as the next possible support target.

Sellers south of resistance at 0.7379 demonstrate fragile posture, recently failing to sustain momentum past 0.7191 and consequently leaving support from 0.7147 unchallenged.

Having seen this market trend higher since bottoming at 0.5506 in March, the odds of price eventually surging through current resistance and heading for another layer of resistance at 0.7495 remain high. Exploring under 0.7147, however, shines focus on the 2020 and 2019 yearly opening values at 0.7016 and 0.7042, respectively.

Resistance at 0.7393 (December 4 high) commands attention in the event further buying develops this week, a level that capped YTD peaks. Note we also have Quasimodo resistance plotted close by at 0.7442.

As evident from the weekly chart, the pair fell sharply last week, retreating more than 150 pips. This manoeuvred price into support at 104.70, clocking fresh lows at 104.27. Should sellers maintain control this week, Quasimodo support at 102.55 offers a feasible target.

The steep decline, shaped by five consecutive daily bearish candles, over the course of last week conquered lows around 105.20 to address weekly support underlined above at 104.70. A relatively clear path is seen beyond 104.70 on the daily scale to the weekly Quasimodo formation at 102.55, though the 103.08 spike formed March 12 could offer some support (green arrow).

Friday scaled lower from resistance at 104.80 going into European trading and bottomed at lows from 104.27, a touch north of Quasimodo support at 104.07. The second half of the US session witnessed the pair reclaim a portion of earlier losses, redirecting action to within shouting distance of 104.80. 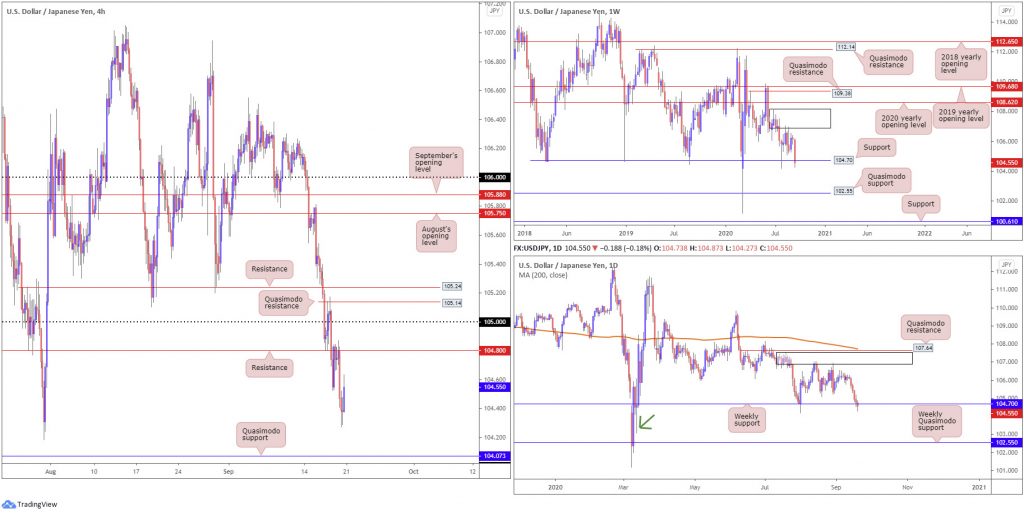 Following the prior week’s stronger-than-expected recovery off support at 1.3059, pinned just north of the 2020 yearly opening level at 1.2975, trend line support-turned resistance, taken from the low 1.2061, arrived on the scene. Although upside momentum has noticeably slackened here, recent trading managed to hold gains into the close.

Continued upside this week highlights the 2017 yearly opening level at 1.3434 as possible resistance.

Joining weekly support at 1.3059, Quasimodo support at 1.3042 on the daily timeframe added additional technical impetus. Resistance at 1.3225, a prior Quasimodo support, entered the fight shortly after the advance and has remained a relatively prominent feature on the daily scale since. Interest from the aforementioned resistance was expected, having seen the level merge with weekly trend line resistance.

In terms of resistance beyond 1.3225 this week, we do not see much to hang our hat on until crossing swords with trend line resistance, etched from the high 1.4265, which happens to align closely with the 200-day SMA (orange – 1.3518). Also in close view is trend line support-turned resistance, taken from the low 1.2957.

However, before reaching the said daily levels, we must contend with weekly resistance around 1.3434.

For those who read recent technical briefings you may recall the following (italics):

Seeking bullish scenarios above 1.32 on the H4 could prove frustrating, hindered by daily resistance from 1.3225 and H4 resistance at 1.3232. A sell-off from 1.3232/1.32, therefore, could EVENTUALLY take hold, bolstered by weekly price recently engaging trend line resistance (taken from the low 1.2061) and the market trending lower since mid-March. H4 sellers may be waiting for a close to form beyond local trend line support, drawn from the low 1.3119.

Breakout buyers, as you can see, did indeed find difficulty above 1.32 last week, with 1.3232/1.32 establishing a ceiling. At the same time, though, local trend line support (H4 1.3119) proved stubborn, rejecting price action on Friday and fuelling a 1.32 retest. 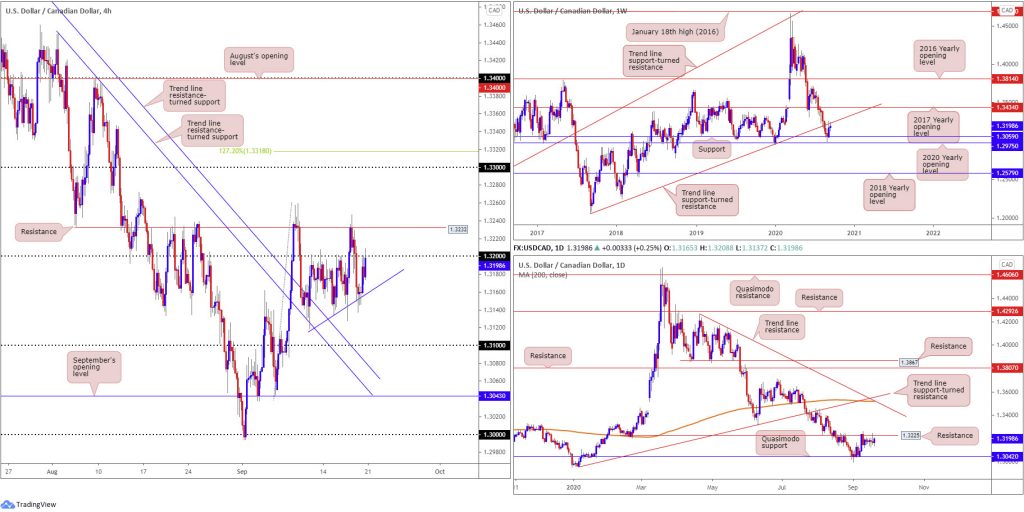 Technical movement on the weekly timeframe reveals buyers and sellers continue to battle for position north of support at 0.9014, potentially gleaning additional impetus from ABCD support at 0.9051 (black arrows).

Resistance at 0.9255, a previous Quasimodo support level, calls for attention should we transition north this week, whilst stepping through current support underscores 0.8799, another layer of support.

The beginning of September observed the upper border of a falling wedge pattern (drawn from the high 0.9241 and a low of 0.9056) give way, consequently unlocking a bullish reversal signal. Resistance at 0.9187 swiftly put a lid on gains, however, directing moves to just north of the falling wedge. Aside from Friday putting forward mild gains, the majority of the week fashioned indecisive daily candles.

Lifting from current price this week targets the aforementioned resistance; dips, nonetheless, brings in weekly support highlighted above at 0.9014.

Although closing above 0.91 signals bullish intent, prudent traders might still mark off support around lows at 0.9055, followed by September’s opening level at 0.9038. 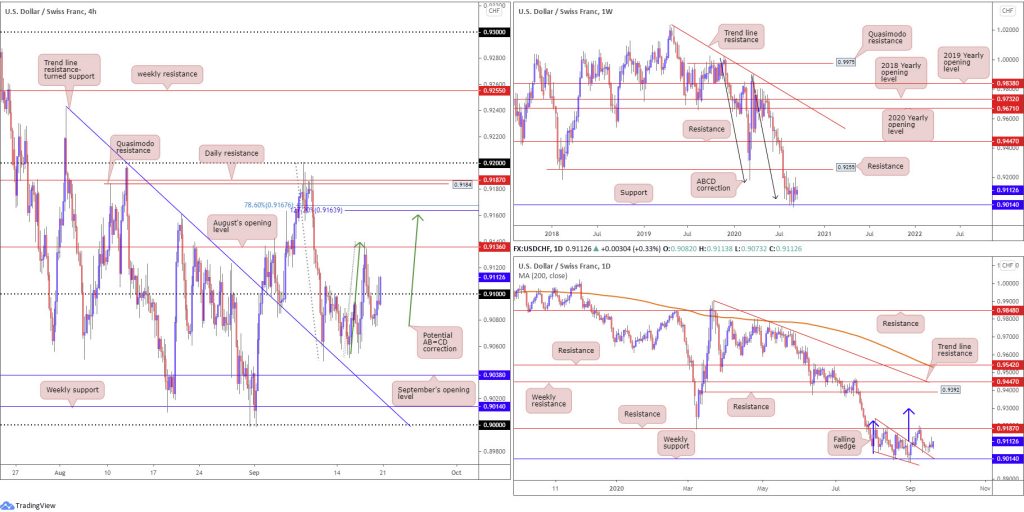 Price continues to languish south of the 2020 yearly opening value at 28595 (sited just under Quasimodo resistance at 29409), with last week finishing considerably off session peaks and establishing a notable selling wick.

Recent trading saw price action elbow through the lower limit of an ascending wedge, taken from the low 22803.

Nearby support from 27640, however, remains in the frame.

Rupturing the aforementioned support could lead to price crossing paths with the 200-day SMA (orange – 26297), followed by a possible run to support priced in at 24934, while a recovery positions the 2020 yearly opening level at 28595 (weekly timeframe) in range.

Also interesting on the H4 chart is a symmetrical triangle forming between 28609/27195. Here, we can see neither buyers nor sellers are pushing price far enough to generate a clear trend.

Since mid-August, technical action has been somewhat uncertain, though remains buoyed by $1,921 support (located ahead of support at $1,882), the previous major all-time high (September 2011). With the current trend trekking north since 2016, the support combination between $1,882 and $1,921 may be enough to encourage additional buying, with most targeting all-time peaks at $2,075 as the initial point. Failure to hold gains could see channel resistance-turned support, etched from the high $1,703, enter view this week.

Candle activity continues to hold gains north of support at $1,911, currently grinding along the underside of a trend line support-turned resistance, taken from the low $1,455.

Friday had bullion put up modest gains against the buck, yet ended the session off best levels. Follow-through buying this week could overrun $1,975 in favour of approaching $2,000. 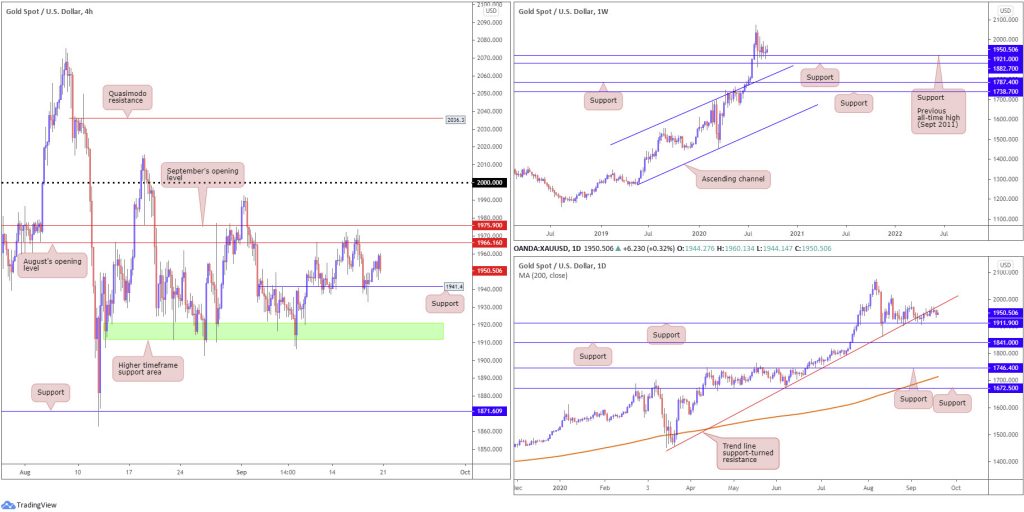