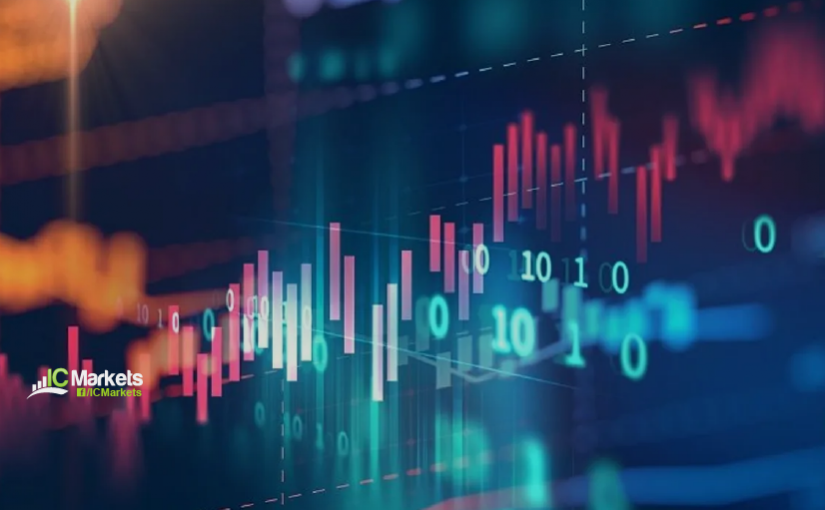 July, as you can see, witnessed vigorous upside, movement that overthrew trend line resistance, taken from the high 1.2555, and the 2019 yearly opening value at 1.1445.

Since transitioning into the month of August, weekly support, mentioned above at 1.1733, has proved useful on the daily timeframe, as has daily resistance coming in at 1.1940 and 1.2002.

Passing 1.2002 on the daily timeframe this week shifts focus to the weekly Quasimodo resistance mentioned above at 1.2092, whereas dipping sub 1.1733 on the daily scale could see price make its way to channel resistance-turned support, extended from the high 1.1147.

A closer reading of price action on the H4 timeframe reveals the unit concluded the week stationed between the 1.19/18 psychological levels.

Round numbers tend to attract a huge amount of orders, with the majority of traders tucking protective stop-loss orders 10-20 pips beyond these levels. Above 1.19, September’s opening value is seen at 1.1937. Beyond 1.18, Quasimodo support at 1.1781 can be seen, followed closely by August’s opening level at 1.1771. Breaking the latter could also have the weekly support level at 1.1733 make an appearance. 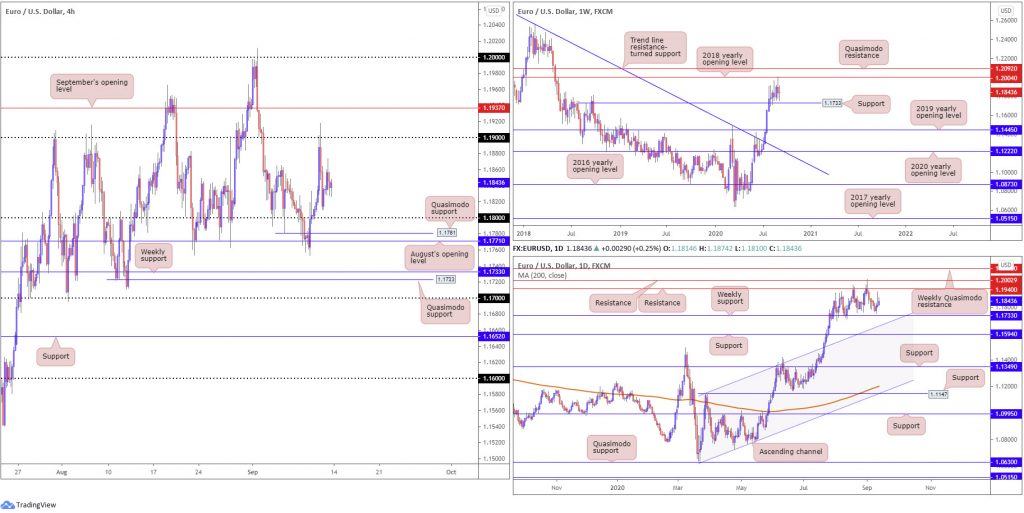 Sterling wrapped up the week erasing nearly 500 pips, its largest one-week loss against the buck since March.

In theory, crossing through 1.2739 this week unseals potential follow-through selling, targeting the 1.2251 June 29 low, closely shadowed by Quasimodo support priced in at 1.2163.

Moves to the upside on the daily scale, assuming we crank back above trend line resistance, points to resistance plotted at 1.3017.

Thursday’s precipitous decline led sterling 1.5% lower against the US dollar, leading to 1.28 entering the fold. Friday exhibited a cautious stance, likely tormenting lower timeframe traders that attempted to establish a position around the psychological level.

Conservative traders watching 1.27/1.2755 as a possible reversal zone will likely want to observe a H4 close form back above 1.28 before committing, with daily trend line resistance set as the initial target, followed by 1.29 on the H4. 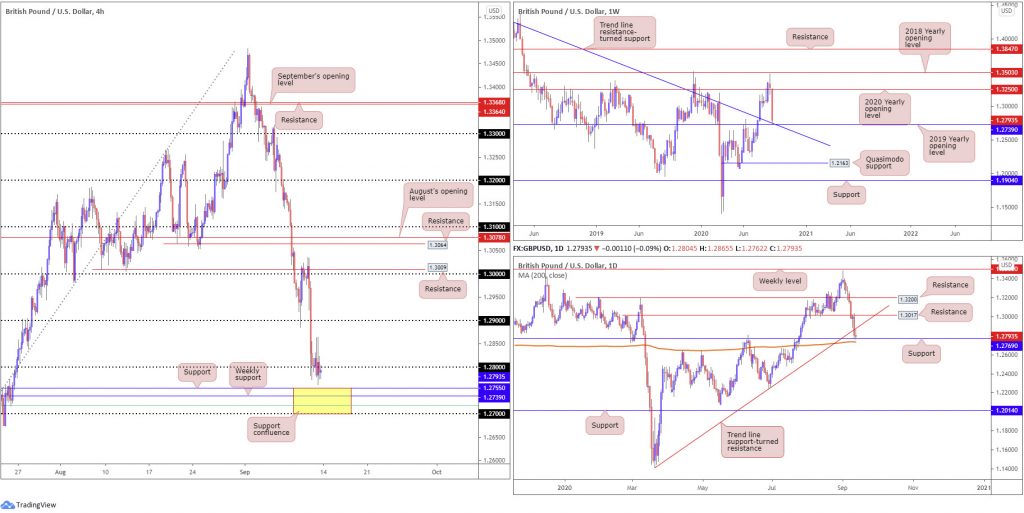 Sellers south of resistance at 0.7379 failed to sustain downside momentum past 0.7191 in recent trading, leaving nearby support from 0.7147 unchallenged.

Having seen this market trend higher since bottoming at 0.5506 in late March, the odds of price surging through current resistance and heading for another layer of resistance at 0.7495 are high. Exploring territory under current support, however, shines the spotlight on the 2020 and 2019 yearly opening levels at 0.7016 and 0.7042, respectively.

The week failed to glean much support from 0.7235 on the daily timeframe, with the second half of the session chalking up back-to-back shooting star candlestick patterns (bearish signals).

To the upside, resistance at 0.7393 (December 4 high) commands attention, a level that capped upside heading into September ahead of Quasimodo resistance at 0.7442. Overthrowing 0.7235 this week, as recent candle action suggests, shifts focus to as far south as support at 0.7049.

Following Wednesday’s upbeat recovery from two trend line supports (0.7076/0.6963) and the 0.72 handle, 0.73 made its way back into view, and, despite multiple attempts to oust the level last week, remained resistance into the close. A break above 0.73 could have bullish themes take over and approach September’s opening level at 0.7376. The latter, as aired in previous writing, is located close by weekly resistance at 0.7379 and daily resistance at 0.7393.

Although 0.73 has indeed proven a tough nut to crack, it appears sellers may be loosening their grip. In addition to Thursday’s spike to 0.7324 potentially filling the majority of sellers’ protective stop loss orders above the round number, the lack of downside pressure seen since informs observers that buyers are likely taking control.

A H4 close above 0.73 might arouse breakout buyers; a retest at the round number following a close higher could also tempt conservative players into the fight. Irrespective of the entry technique, 0.74/0.7376 offers a logical upside target this week. 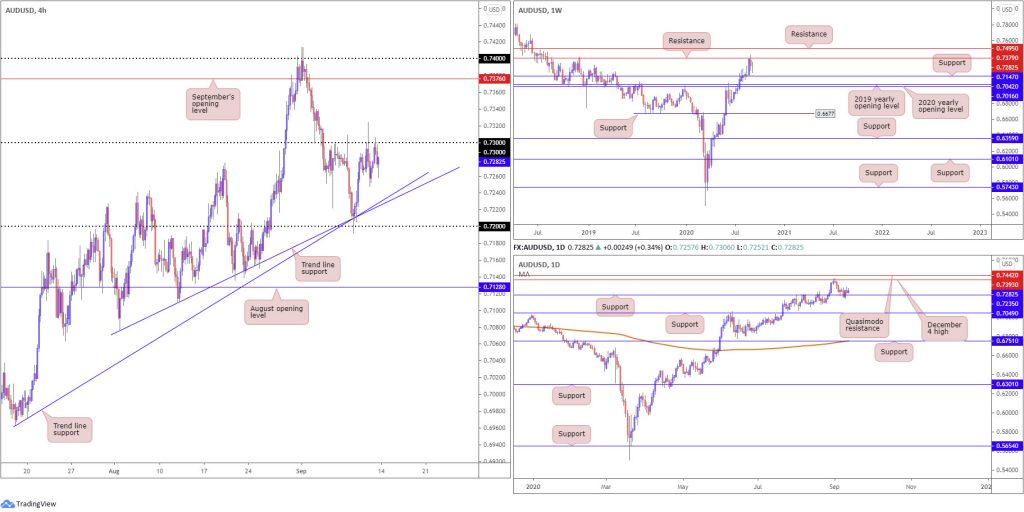 Friday observed USD/JPY fluctuate within a narrow 20-pip range, mid-way between the 106 handle and Quasimodo resistance at 106.32.

Snapping an eight-week bearish phase, USD/CAD staged a stronger-than-expected recovery last week off support at 1.3059 (pinned just north of the 2020 yearly opening level at 1.2975). This led to trend line support-turned resistance, taken from the low 1.2061, making an appearance, commanding enough of a presence to generate a mild end-of-week correction.

Continued upside this week highlights the 2017 yearly opening level at 1.3434 as potential resistance.

Quasimodo support at 1.3042 remained a notable base going into the week, with the buck latching onto a strong bid in early trading to shake hands with resistance at 1.3225, a prior Quasimodo support.

Brushing aside 1.32 this week turns attention back to resistance at 1.3232, with a break perhaps exposing the 1.33 handle and a possible three-drive completion at the 127.2% Fibonacci extension point at 1.3318. Traders may also wish to acknowledge the H4 resistance (1.3232) boasts a close connection with daily resistance at 1.3225.

With the above in mind, seeking bullish scenarios above 1.32 on the H4 could prove frustrating, hindered by daily resistance from 1.3225 and H4 resistance at 1.3232. A sell-off from 1.3232/1.32, therefore, could take hold this week, bolstered by weekly price also recently engaging trend line resistance and the market trending lower since mid-March.

Climbing above 1.3232 this week, nevertheless, ignites the possibility of bullish themes and places 1.33 on the H4 in the firing range (and a three-drive pattern completion around 1.3318).

As you can see, buyers and sellers continue to battle for position north of support at 0.9014, potentially gleaning additional impetus from ABCD support at 0.9051 (black arrows). The prior week’s recovery seemed promising, engulfing the previous weekly range. Last week, however, failed to capitalise on recent upside and fell 40 pips.

Resistance at 0.9255, a previous Quasimodo support level, calls for attention should we transition north this week.

The month of August saw candle action forge a falling wedge pattern, pencilled in from the high 0.9241 and a low of 0.9056.

The beginning of September saw the upper border of the falling wedge give way, consequently unlocking a bullish reversal signal. Resistance at 0.9187 swiftly put a lid on gains, however, directing a retest at the falling wedge late last week, in the shape of a hammer candlestick formation (bullish signal).

Should we see buyers take over from current price and upset resistance at 0.9187, the falling wedge take-profit target could be the next port of call around 0.9294 (blue arrows).

USD/CHF wrapped up Thursday considerably off session lows, recoiling from a H4 trend line resistance-turned support, taken from the high 0.9241 (represents the upper limit of the falling wedge on the daily timeframe).

Thursday marginally penetrated 0.91 to the upside, yet failed to sustain gains on Friday, ending the session in mildly negative territory under the round number. Above the latter, August’s opening level at 0.9136 steps into view, while brushing aside this base could see H4 Quasimodo resistance at 0.9184 make a show (and daily resistance at 0.9187).

Failing to overturn 0.91 this week, nevertheless, sends across a potential bearish scenario back to the aforementioned trend line support and September’s opening level at 0.9038.

With daily price finishing the week above the upper boundary of its falling wedge configuration, along with H4 failing to eke out much of a bearish phase under 0.91, this could have buyers attempt to make a run for August’s opening level at 0.9136 (H4) early this week, with the possibility of revisiting daily resistance at 0.9187.

Breakout buyers north of 0.91 could latch on to the breakout candle’s close as a means of entry; other traders might seek a retest at the round number before pulling the trigger. 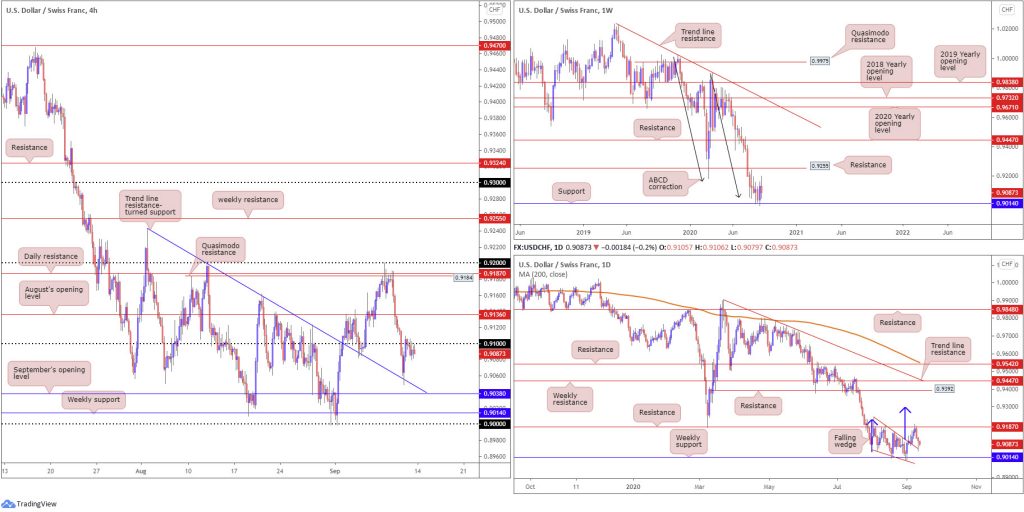 The week, as you can see, ended eking out a second consecutive weekly loss, deriving technical impetus from the recent rejection off the 2020 yearly opening value at 28595 (sited just under Quasimodo resistance at 29409).

The lower limit of an ascending wedge, taken from the low 22803, along with support from 27640, continues to hinder downside on the daily timeframe. Rupturing the aforementioned supports this week could lead to price crossing paths with the 200-day SMA (orange – 26294), while a recovery phase positions the 2020 yearly opening level at 28595 (weekly timeframe) back in the firing range.

Turning to higher levels this week calls for last Wednesday’s high at 28206, with September’s opening level at 28369 resting as the next point of interest should further buying emerge.

Spot gold finished the week in modestly positive territory, trading from $1,921.00 support (located ahead of support at $1,882.70), the previous major all-time high (September 2011). Though many traders will acknowledge the week concluded by way of a neutral doji indecision candle.

Trend line support-turned resistance, taken from the low $1,455.32, swerved into view in the second half of last week, following an earlier rally from support priced in at $1,911.90. Technical traders will also acknowledge Thursday’s session pencilled in a shooting star candlestick pattern (a bearish signal).

For those who read recent analysis on XAU/USD you may recall the following (italics):

As evident from the H4 chart, bullion did indeed challenge September’s opening value and has since retreated to test the mettle of intraday support located at $1,941.43. 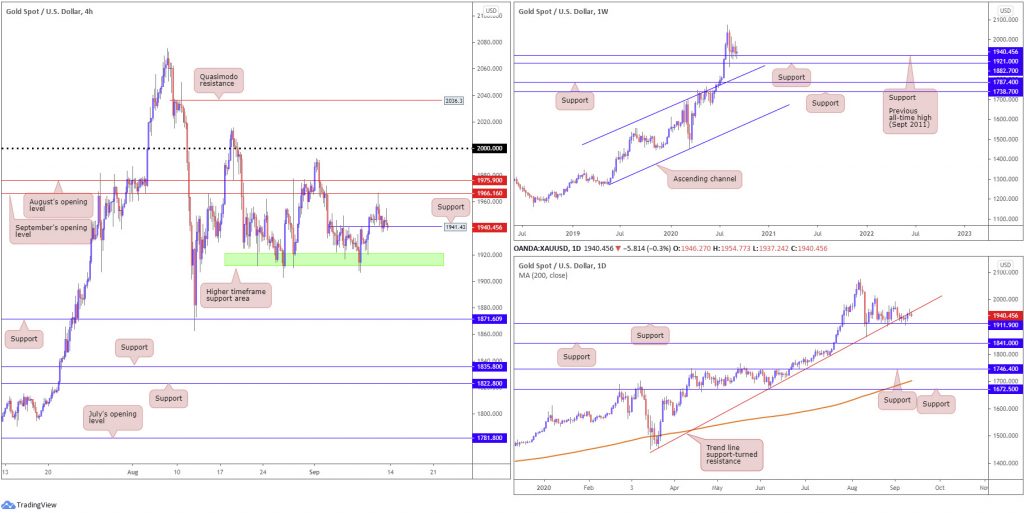