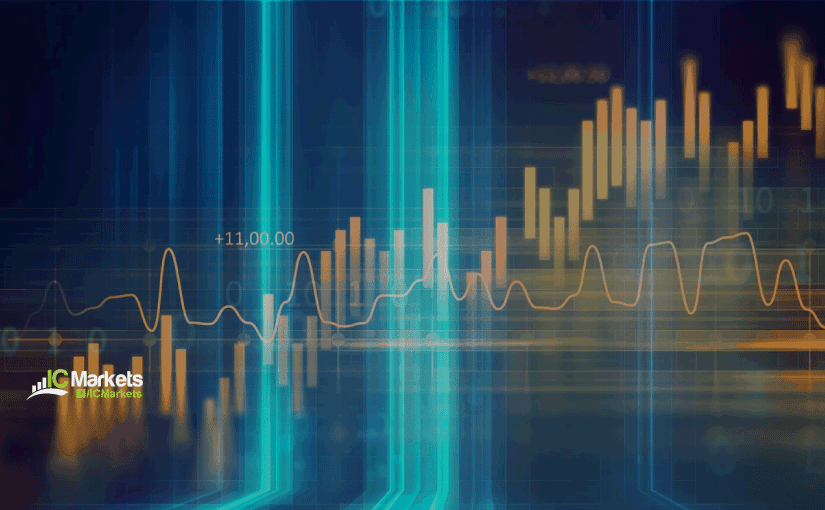 Supply at 1.2420-1.2214 remains central focus on the weekly scale, with last week establishing a shooting star pattern off multi-month peaks at 1.2349.

Should sellers take the reins, the 2018 yearly opening value at 1.2004 is likely a level downside movement may target.

In terms of trend, however, upside remains favoured – more so if price overthrows the 1.2555 February 12 high (2018). The above implies buyers could take the wheel and attempt to overthrow the aforementioned supply zone.

1.2344-1.2279 remained a key zone last week, with price action now honing in on support drawn from 1.2165. A break of this boundary not only lays the basis for further selling to another support at 1.1965 (and trend line support, taken from the low 1.0774), a bearish move would also add conviction to the weekly timeframe’s recent shooting star to weekly support at 1.2004 (sited just above 1.1965 daily support).

According to the US Bureau of Labour Statistics on Friday, total non-farm employment fell by 140,000 in December vs. expectations of a 60,000 rise – the first decline in employment since the job market started to recover in May. The US unemployment rate was unchanged at 6.7% (expected: 6.8%), and average hourly earnings jumped to 0.8% from 0.3% (expected: 0.2%).

Employment data caused a minor USD sell-off, though was not really anything to write home about. The US dollar index finished the week strongly off multi-year lows, consequently directing EUR/USD H4 candles south of trend line support, extended from the low 1.1602, and January’s opening value at 1.2239 towards the 1.22 figure.

From the daily timeframe, price is seen hovering between 1.3763 resistance (previous Quasimodo support level) and trend line support, etched from the low 1.1409.

As a result, focus is likely to remain on the two aforementioned levels this week.

Despite last week kicking off with reasonably dominant downside from 1.37 (surrounded by a three-drive bearish reversal zone – 1.3745/1.3677), price action spent the week fluctuating around 1.36, south of January’s opening value at 1.3646

Friday’s session was mostly unresponsive to US labour data, though the pair concluded south of the 1.36 figure. H4 support next on tap is likely to form around the 1.35 area (converges with the 2018 yearly opening value mentioned above on the weekly timeframe at 1.3503).

The Australian dollar wrapped up another week on the front foot against the US dollar, sailing to a fresh 30-month high at 0.7820 and further fuelling the current uptrend.

This places buyers in a strong position with room to possibly reach as far north as resistance coming in at 0.8127.

Price action on the daily timeframe shook hands with Quasimodo resistance priced in at 0.7784, which, as you can see, posed somewhat of a problem for buyers in recent days. Should sellers intensify their position this week, chart studies indicate support at 0.7655 could make an appearance. Be that as it may, an advance beyond 0.7784 shines the technical spotlight on another Quasimodo resistance at 0.7893.

Last week saw price action on the H4 timeframe establish a range between support at 0.7742 (previous swing high) and resistance between 0.7810/0.7791 (a previous double-top and a Quasimodo resistance), which happens to house the 0.78 figure and a 127.2% Fibonacci projection point at 0.7792.

The upper edge of the aforementioned range is effectively reinforced by the daily Quasimodo resistance level pointed out above at 0.7784. Beyond H4 support at 0.7742, the 0.77 figure calls for attention given its connection with a 127.2% Fibonacci projection point and a 100% Fibonacci extension point.

Quasimodo support at 102.55 came within touching distance of entering the picture last week, prompting a robust advance. Further upside may provide enough impetus for buyers to attempt a breakout above the current declining wedge and unlock a reversal signal.

The technical landscape on the daily timeframe reveals the rebound north of the noted weekly Quasimodo support at 102.55 sparked a daily close above the declining wedge between 105.67/103.65.

Having seen daily price establish a close above the aforementioned declining wedge, this is likely to be interpreted as a potential reversal signal this week, targeting at least trend line resistance, etched from the high 111.71.

USD/JPY initially declined following Friday’s US employment figures (see M30 for clearer chart view), yet downside was short-lived, bottoming around 103.60 and reconnecting with the underside of the 104 figure. 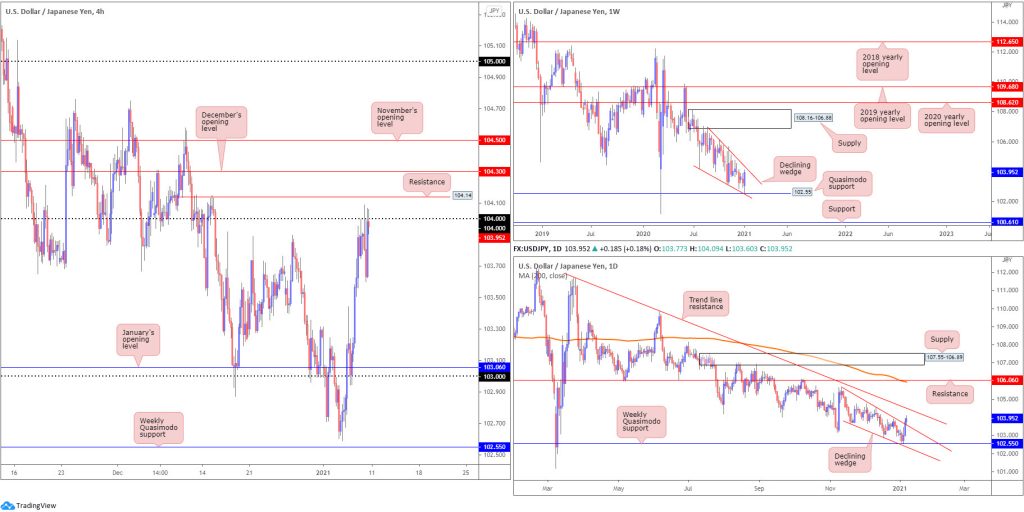 Aside from the above, technical structure pretty much resembles that of the weekly timeframe: weekly resistance at 1.2887 and weekly support plotted at 1.2579.

Dismal labour figures out of Canada and the US kept USD/CAD somewhat side-lined around January’s opening value at 1.2713 and the 1.27 figure on Friday. This followed a half-hearted recovery on Wednesday, a touch north of trend line resistance-turned support, extended from the high 1.3389.

Holding south this week throws multi-year lows back on the scene at 1.2630 and the 1.26 figure (H4), sited just north of the weekly support level mentioned above at 1.2579.

The weekly timeframe shows not only has USD/CHF been entrenched within a downtrend since May 2019, the pair also remains loitering at the underside of resistance drawn from 0.8905. Because of this, sellers are expected to maintain control in the coming weeks.

Support on the weekly timeframe is not expected to make an appearance until 0.8696.

Upside structure is found around 0.8880, a 78.6% Fibonacci retracement ratio at 0.8884 and a 161.8% Fibonacci extension point at 0.8880, with a break exposing the 0.89 figure and 0.8923 Quasimodo resistance level (red zone). What’s interesting from a technical perspective is weekly resistance at 0.8905 coincides with the aforementioned H4 resistance zone.

The first full trading week of 2021 kicked off registering fresh all-time highs at 31,271 on the Dow Jones Industrial Average.

Although the unit concluded the week around session peaks (generally a sign of strength), a correction this week has limited support in sight until around 29,409 (previous Quasimodo resistance), together with trend line support, extended from the low 18,213.

Should sellers strengthen their grip this week, support at $1,787 could play a leading role, a level plotted just north of another layer of support at $1,738.

While the recent sell-off may have triggered short-term interest to the downside, it is worth noting that in terms of trend we’ve been higher since early 2016.

Friday concluded down by more than 3% against a broadly stronger US dollar, hauling gold back to its 200-day SMA (orange – $1,836). SMAs are known to provide dynamic support and resistance, particularly the 200-day setting, therefore buyers may attempt to recoup lost ground this week.

In the event buyers fail to hold things higher, support at $1,746 could act as a magnet to price, a level sponsored by nearby Fibonacci support around $1,760ish.

Friday’s depreciation conquered a number of key support levels on the H4 scale (including $1,900), ending the week modestly bottoming ahead of support coming in at $1,822, forming a hammer pattern (bullish signal often found around troughs).

Should buyers regain consciousness this week, resistance is posted around the $1,859 region, a previous Quasimodo support level, and November’s opening value priced at $1,878.