Including Fundamental Analysis In Your Trading – IC Markets | Official Blog 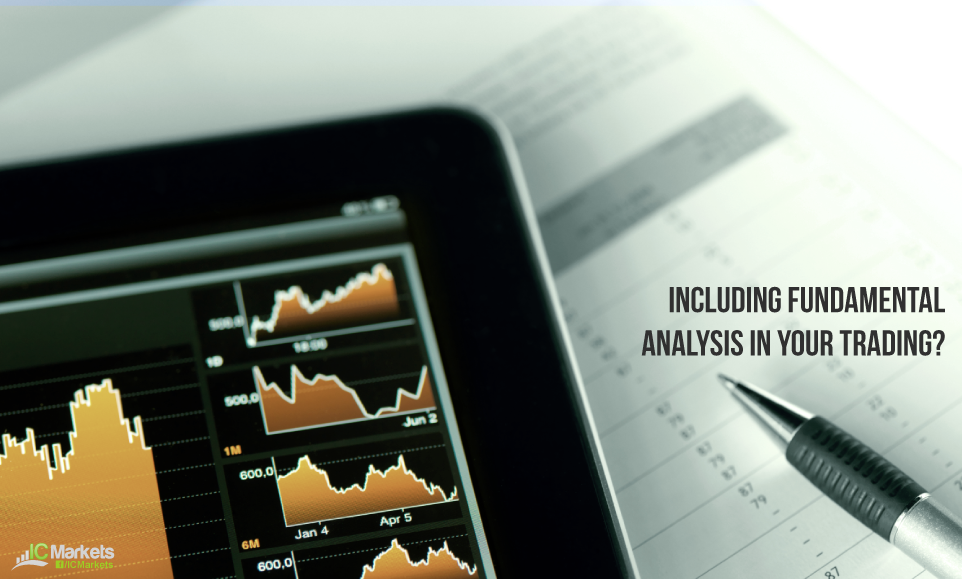 Do you remember the first time you encountered the financial markets?

Unless you have an interest in economics, it’s likely you were drawn to technical analysis (T.A).

Colourful indicators, pin-point accurate support/resistance, long-term trend lines and reports of technical traders trading for a living, is usually sufficient to lure most new traders into this category.

Despite this, another method of trading exists: fundamental analysis (F.A).

Both approaches have strengths and weaknesses. Some traders choose to adopt one method; others elect to use both.

What is Fundamental Analysis?

When traders follow F.A, they’re examining the economic situation of a country and its possible effects on its currency.

Through research of macroeconomic events, a nation’s politics and geopolitical data, market speculators attempt to forecast future exchange rates. Politics is the activities associated with the governing of an area or group of people, as well as the activities of those trying to gain and maintain power. Geopolitics is the same thing, except on a global scale.

Just like T.A, F.A has a wide-range of macroeconomic indicators, with some attracting more interest than others. A country’s employment situation, interest rates, housing conditions, balance of trade, growth data and inflation figures are considered top-tier indicators fundamental analysts use to gauge a country’s well-being.

Indicators that announce better-than-expected numbers are typically good for the country’s currency, implying the country’s central bank may eventually employ a hawkish stance. Being hawkish is when the central bank guards against excessive inflation, raising rates and therefore making credit more expensive. This is considered contractionary monetary policy.

On the other side of the coin, disappointing numbers may cause the central bank to adopt a dovish stance. Dovish is the opposite of hawkish. The central bank is less concerned about inflation and more worried about weak growth and high unemployment. This is expansionary monetary policy – lowering interest rates and increasing money supply.

A country’s political stance also affects currency prices. Investors put their money in stable countries with a strong economy and a stable political system. When the UK voted for ‘Brexit’ in June 2016, the British pound dropped more than 20% in value against the US dollar. If there was an economic indicator released supporting the pound that day, it would have largely been ignored.

A Brief Look at the US Employment Report

As the US employment report is one of the most eagerly awaited economic indicators, let’s peer into this market-moving data and give you a brief idea of what fundamental analysts look for.

The US employment report is well timed, released after the end of the month being reviewed.

It’s also a leading indicator of consumer inflation. This is because when businesses pay more for labour, the higher costs are sometimes passed on to the consumer. The economic statistic that generates the most excitement within this report, though, is the monthly change in non-farm employment. Other figures that warrant close attention are:

US employment news can greatly affect the dollar’s value (and affect counterpart currencies) in the currency markets.

A string of better-than-expected months can suggest the Federal Reserve (the Fed), the central banking system of the United States of America, may increase interest rates, generally attracting investors and leading to an advance in the buck. By the same token, weakening employment may indicate the Fed could step in and lower interest rates, which would likely see a continuation move lower in the dollar.

With the majority of technical traders viewing charts differently, it’s fair to say not all traders view fundamentals the same way as well.

Market participants who favour T.A will occasionally use economic indicators to gauge when to step away from the market, or reduce risk.

For example, consider a long trade that’s in profit on EUR/USD, with the non-farm employment change due to be released within the hour. Does the trader hope the release favours the current position, or adapt?

To our way of seeing things, unless the trader holds on and hopes, he/she has the following options:

Another way of utilising fundamentals is by incorporating a fundamental trigger alongside a technical entry. Imagine that the Fed has been talking about raising interest rates for a while now, and you’re seeing a considerable amount of dollar buying come into the market. Of course, you could just buy on the premise the dollar is the favoured currency at the moment. However, a trader who combines T.A and F.A into his/her decision process may prefer to wait for a break of a noteworthy resistance or a trend line resistance to confirm a long entry. This way the trade exhibits both T.A and F.A cues, increasing the odds of a successful trade.

If you’re a longer-term trader who prefers to ride trends or catch reversals, you can, as we briefly highlighted above, also make use of F.A in gauging how economic data can affect central banks’ interest-rate decisions and monetary policy actions. Interest rates vary for different economies and central banks are able to raise or lower these in order to maintain price stability and boost economic growth.

We agree that there’s a plethora of information to take on board regarding the fundamental landscape, so we’re not surprised a great deal of traders coming into the business choose to adopt a technical approach. Still, we feel that completely ignoring the fundamental events is extremely risky. Even knowing when the next few high-impacting events are scheduled for release can save one an unnecessary loss.

For those interested in furthering their understanding of fundamental analysis, learning how to interpret the economic indicators is a good start. A noteworthy book: ‘The Secrets Of Economic Indicators’ by Bernard Baumohl is fantastic, and will help one understand how economic indicators function.

Apart from economic indicators, traders are urged to keep abreast with the current economic climate of the market you’re trading, such as: upcoming elections, wars, comments from political figures and also speeches from key members representing major central banks.