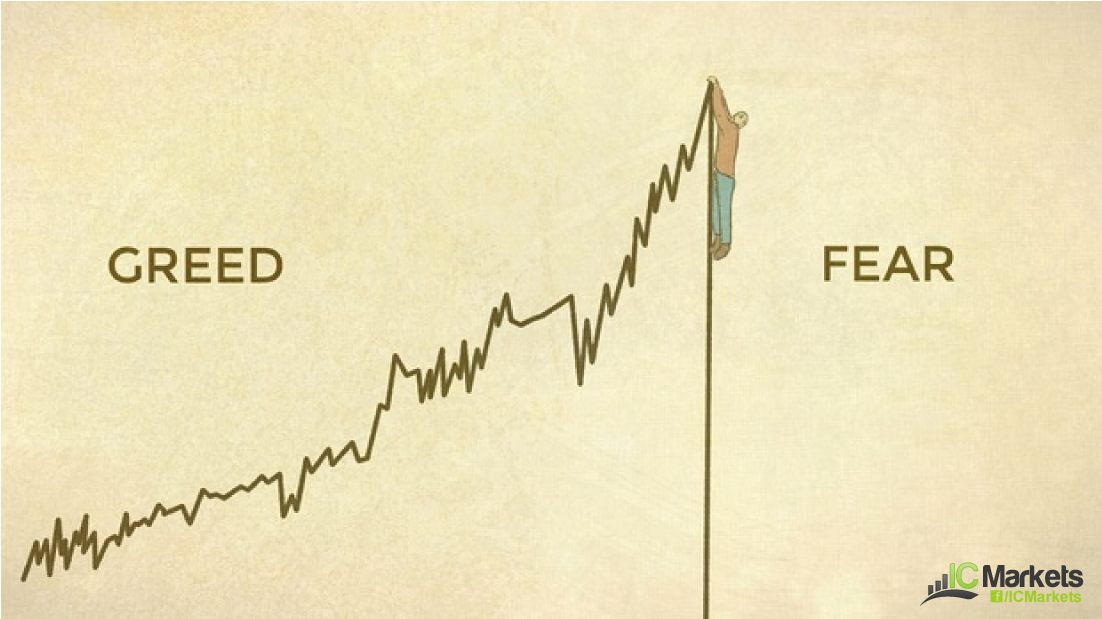 Greed and fear, two opposing emotional conditions, are principal drivers that have a profound impact on our lives. And unless you’re a robot coated in human skin, dealing with greed and fear is inevitable in trading.

Greed and fear: a brief history

It is well documented greed inflates market prices during a boom and fear depresses action through busts. Savvier investors, according to Warrant Buffet, tend to avoid following the crowd:

The US stock market’s ‘Dot-Com Bubble’, also known as the ‘Internet bubble’, is a textbook case of greed. Throughout this time, exorbitant prices of new Internet companies motivated investors to plough money into the market. Buying activity in internet-related stocks reached a fever pitch – many of these companies were just start-ups. Investors got greedy, powering further greed which eventually formed a market bubble that burst in early 2000. A market bubble is an asset inflated out of proportion to its intrinsic value in response to exaggerated high expectations of resale value.

Another definitive case of greed was the US subprime mortgage crisis, which eventually led to a financial meltdown. Housing prices rose rapidly during this time, and the number of subprime mortgages given out was rising even more. From 2004-2006, the Federal Reserve raised the interest rate over a dozen times in an attempt to slow this down and avoid serious inflation. This sudden increase in mortgage rates played a major role in the growing number of defaults, starting in 2007 and peaking in 2009. Most of the blame, though, is said to be at the hands of the mortgage lenders. It was these lenders who approved mortgage agreements to clients with poor credit history and a high risk of default.

A good example of this is when the Dot-Com Bubble burst; a wave of fear saturated the markets. Focus shifted away from equity markets towards investments deemed less risky. The shift to low-risk funds shows investors likely disregarded their long-term investing plans and based decisions on emotion, overrun by a fear of sustaining further losses.

Greed and fear in your trading

As trading is a relatively solitary job, traders are often left thinking they’re the only ones who experience greed and fear. This couldn’t be further from the truth. Large sums of money filters through the markets on a daily basis from large commercial banks, mutual funds and pension funds, all of which are susceptible to emotions. Greed and fear is universal.

Regulating emotions during trading is tough. The majority of traders understand most technical methodologies, though handling greed and fear is a different ball game. Each new candle formation has a meaning for most traders, inviting an emotional response.

Let’s take this a step further and look at greed and fear through the eyes of a fictitious retail trader named Jim. This particular trader has 3 years experience. Although Jim is content with the trading methodology, the emotional side of things is still a challenge.

Jim happens across a ‘bread and butter intraday setup’ of his around the London open. He calculates his position size, double checks the setup to make sure it is in line with his trading plan and enters the trade. These trades rarely fail, according to Jim.

Ten minutes later, price is within shouting distance of his protective stop-loss order. He tries to remain calm and composed, but fear continues to tap away at him as he ‘expected’ the trade to work. He feels his heart thud against his chest as he contemplates moving the stop further from the entry point to avoid a loss. He rationalises that if he allows the trade more room to breathe, it will likely work out. The other side of his brain, the logical side, tells him to stick to the plan.

Now let’s look at the same trade setup, but this time Jim’s trade rallies in favour.

… Ten minutes later, price is within striking distance of the initial take-profit target. It is at this point he thinks the trade is a ‘runner’. He starts looking for other locations on the chart to move his take-profit order to. Five pips ahead of the take profit (according to the trading plan), he moves the order thirty pips higher to where he ‘thinks’ the market is headed.

Was there a plan if price did not achieve the new target? No. How could there be as Jim was operating outside of his trading plan. So what does Jim do when/if price trades against him? Fear will invariably set in and usually end unfavourably. This is a common theme among traders, hence why learning to control emotions is paramount to achieving success. Although learning a method takes practice, knowing how to regulate your psychological state is just as important – if not more important.

Can greed and fear be controlled?

While it is impossible to completely remove greed and fear from trading, many traders argue it can be regulated.