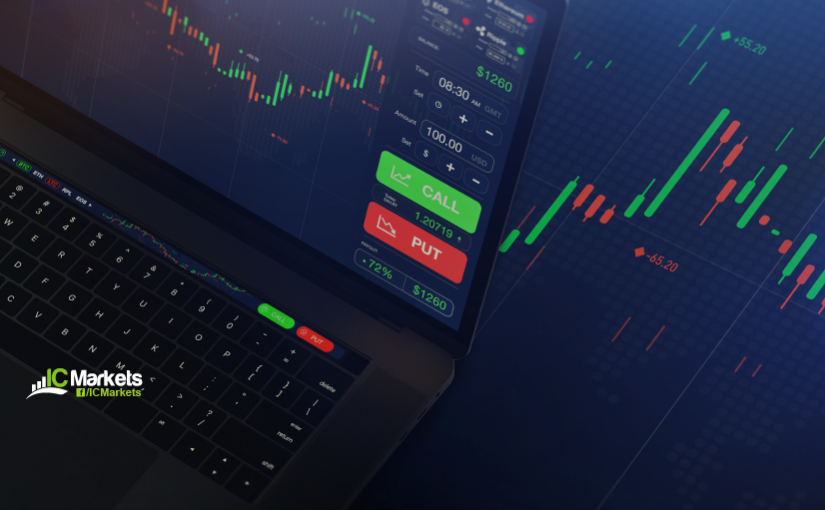 Downbeat risk sentiment bolstered demand for the US dollar Thursday, consequently leading EUR/USD sharply lower. Following a H4 retest at August’s opening value from 1.1771 (and converging trend line support-turned resistance, taken from the low 1.1684), October’s opening value at 1.1730 succumbed to downside pressure and permitted a 1.17 test. The round number, albeit modestly holding during afternoon trading in the US, echoes a fragile tone and shines the spotlight on nearby support at 1.1679.

Higher up on the curve, daily sellers hold trend line support-turned resistance, etched from the low 1.1695. Moves to the downside offer support at 1.1594 (and a 50.0% retracement ratio at 1.1582), whereas resistance at 1.1940 could eventually make an appearance should buying emerge.

For those who followed recent analysis on EUR/USD may recall the following (italics):

As evident from the H4 chart, a reaction from the 1.1771 zone has been seen. Should the bearish response lure additional selling, engulfing 1.1730 could be on the horizon.

Those short 1.1771 likely ended Thursday in a good place.

Aiding the H4 resistance zone is a daily resistance level coming in at 1.3017, with downside on the daily timeframe pointing to trend line support, extended from the low 1.2075.

Meanwhile, on the weekly timeframe, last week observed GBP/USD extend recent recovery gains from support at 1.2739 (a 2019 yearly opening value). Technicians will acknowledge 1.2739 blends with trend line resistance-turned support, extended from the high 1.5930. In terms of resistance, price has room to advance as far north as the 2020 yearly opening value at 1.3250.

Taking into consideration both weekly and daily timeframes show room to move lower (weekly could revisit support at 1.2739), breaking 1.29 and 1.2865 to the downside on the H4 could be in the offing, ultimately sparking a bearish theme to 1.28. Traders may also want to acknowledge the aforementioned round number coincides with daily trend line support. 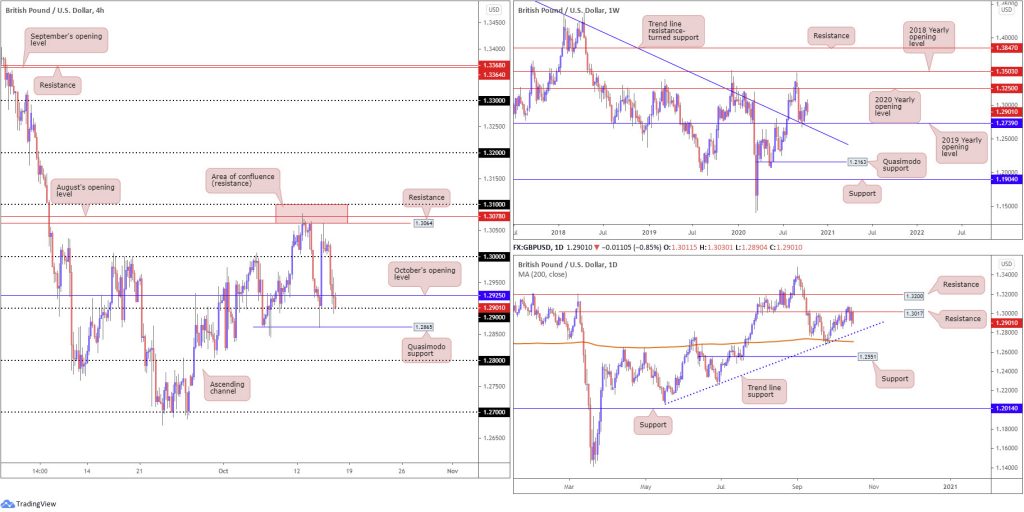 Thursday saw AUD/USD suffer at the hands of not only dovish guidance from RBA Governor Lowe, the pair was also weighed on the back of downbeat risk sentiment.

After tunnelling through a number of key supports on the H4 timeframe, the 78.6% Fibonacci retracement ratio at 0.7056 offered some much-needed respite. Current action is now poised to retest the underside of the 0.71 handle. Further downside positions a support area at 0.6988/0.7019 in the mix, which holds the key figure 0.70 within and also a Quasimodo support level at 0.7016.

With weekly price showing room to trade lower until reaching at least 0.7042, and daily flow eyeing support at 0.7017, retesting 0.71 as resistance on the H1 timeframe today could have sellers make an appearance. However, although the above could encourage bearish scenarios, do bear in mind the trend in this market has been trekking northbound since early this year.

Technically, H4 recently glanced above October’s opening value at 105.42. Should follow-through buying unfold here, further upside towards August and September’s opening values at 105.75 and 105.88, respectively, could be on the cards.

Support at 104.70 remains a watched level on the weekly and daily timeframes, particularly after recently welcoming a 1% rebound.

Supply at 108.16-106.88 also remains prominent from the weekly chart, capping upside since early August. Weekly Quasimodo support at 102.55 offers a feasible target beyond current support in the event we turn south, while removing supply draws the 2020 yearly opening value at 108.62 into the fight.

Daily price, on the other hand, is caught between resistance at 106.06 (a level mostly ignored since serving as support during May and June) and the aforementioned weekly support level.

A decisive H4 close above 105.42 today highlights 105.88/75 as potential upside targets (followed by the 106 handle which also represents daily resistance at 106.06). Conservative buyers, however, may seek a 105.42 retest as support (preferably in the shape of a H4 bullish candlestick formation) before committing to a bullish theme. 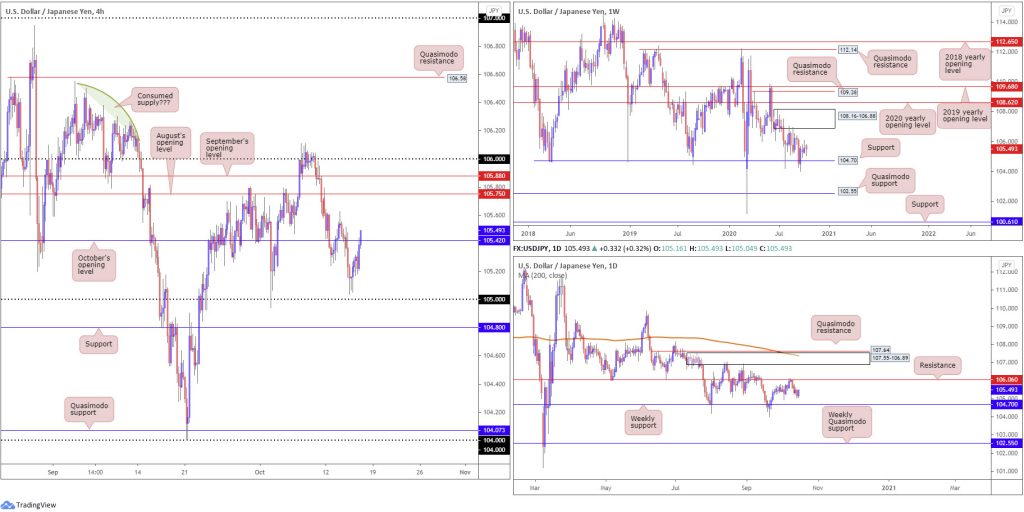 Weekly price discovered a floor ahead of support at 1.3059 in recent dealings (arranged above the 2020 yearly opening value at 1.2975), with continued upside to perhaps hone in on the 2017 yearly opening value at 1.3434. Resistance at 1.3225 on the daily timeframe, however, nudged its way into the spotlight yesterday, which for the time being is holding. Sustained buying here, nevertheless, could lead candle action to trend line resistance, taken from the high 1.4265. 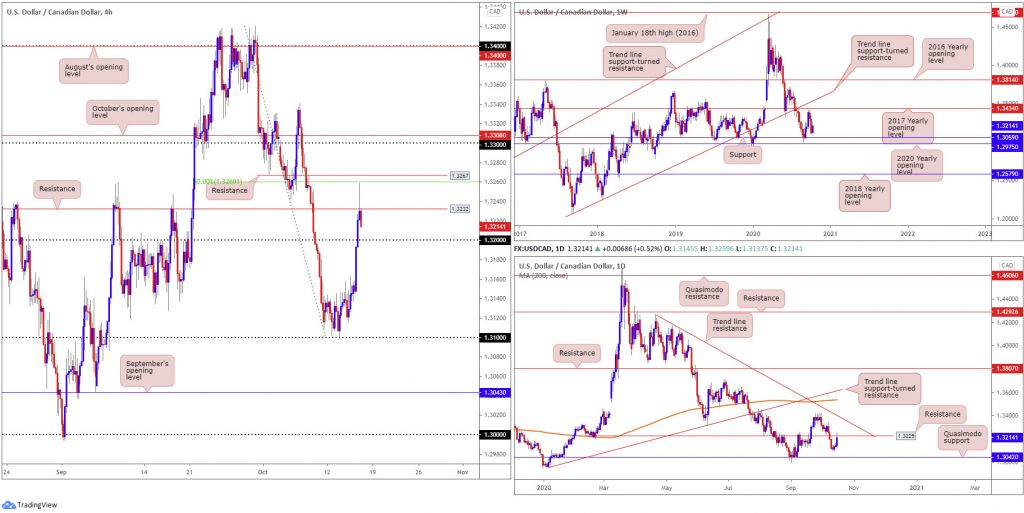 USD/CHF modestly rallied Thursday amidst broad USD strength. However, as you can see, gains were limited as risk aversion also underpinned the safe-haven Swiss franc.

On the technical front, buyers and sellers are battling for position between trend line support-turned resistance, based on the H4 timeframe from the low 0.8998, and August’s opening value at 0.9135. To the upside, Quasimodo resistance at 0.9184 is in sight, followed by the 0.92 handle and October’s opening value at 0.9206, whereas space under 0.9135 shows room to target the 0.91 handle.

Further out on the weekly timeframe, the closing stages of September had price retest resistance at 0.9255 (a previous Quasimodo support level) which, during the first half of October, established two back-to-back near-full-bodied bearish candles. As a result, support at 0.9014, as well as ABCD support at 0.9051 (black arrows), is turf that may be retested. It is also worth noting USD/CHF has traded lower since topping in April 2019.

A closer reading of price action on the daily timeframe reveals the unit is stationed within striking distance of resistance from 0.9187. What’s also interesting is weekly support at 0.9014 on the daily chart represents a Quasimodo support (red arrow).

H4 securing ground under 0.9135 today signals a possible move to 0.91, though conservative sellers will likely want to see a 0.9135 retest form before pulling the trigger.

US equities slipped Thursday as investors digested ongoing stimulus talks and a larger-than-anticipated weekly unemployment claims print. The Dow Jones Industrial Average fell 19.80 points, or 0.07%; the S&P 500 dipped 5.33 points, or 0.15% and the Nasdaq traded lower by 54.86 points, or 0.47%.

The DJIA fell sharply amid European hours yesterday, driving through H4 trend line support, extended from the low 26558, and September’s opening value at 28369. As you can see, however, support at 28216 (a prior Quasimodo resistance level) received the candles and encouraged a strong recovery with price retesting trend line support-turned resistance (26558).

Higher, we can see weekly price engaging with the 2020 yearly opening value at 28595, set a touch under Quasimodo resistance at 29409. Meanwhile, the daily timeframe shows the unit faded trend line support-turned resistance, extended from the low 22803, at the beginning of the week, though Thursday saw a hammer candlestick pattern emerge (bullish signal).

Traders likely view the H4 testing trend line support-turned resistance as a low-probability setup, having seen daily price form a bullish candlestick pattern yesterday and weekly price yet to show much bearish intent around 28595. Therefore, a retest at September’s opening value from 28369 on the H4 could come about today, a move that may inspire a bullish theme.

The yellow metal finished Thursday a shade higher against the buck, yet was unable to print anything substantial as downbeat market sentiment bolstered the US dollar.

Technicians will acknowledge the H4 trend line formation, extended from the low $1,848, continues to forge support, bringing to light the possibility of H4 resistance at $1,916 entering the fold today. A break here also uncovers the $1,933 October 11 peak, followed by H4 resistance at $1,941 and a 61.8% Fibonacci retracement ratio at $1,938.

Interestingly, weekly price also exhibits scope to advance after addressing support at $1,882. On the other side of the field, however, we can still see daily price holding under resistance at $1,911, a level fusing closely with a trend line resistance, taken from the high $2,015. Additional selling from this region could take the precious metal as far south as support at $1,841.

With the trend on gold higher since 2016, and the weekly timeframe demonstrating active support at $1,882, buyers still likely have a strong hand in this fight.

Traders may interpret chart structure as a cue to begin pursuing bullish themes off the current H4 trend line support, while conservative buyers might prefer to wait and see if the unit conquers H4 resistance at $1,916 before taking action.