Do You Have a Cut-Off Point? – IC Markets | Official Blog 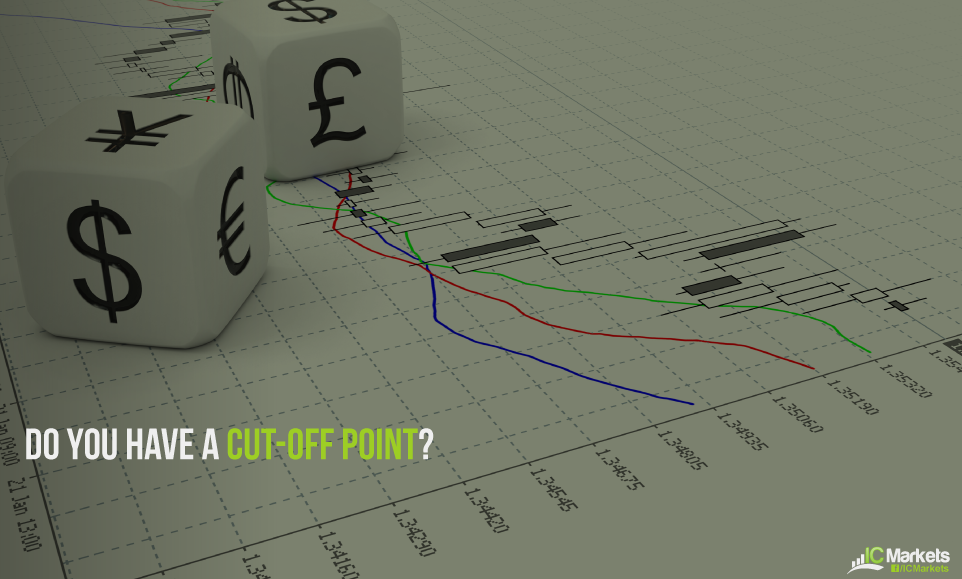 There will be times a trader finds themself caught up in the motions of trading that they lose sight of the primary objective: protecting capital.

As each trader is different in terms of risk appetite, cut-off points vary, though will mostly consist of daily, weekly or even monthly or quarterly cut-off points.

It is not uncommon for day traders to execute 1-2 trades in a day. Using a 2% risk profile (risking 2% of the account’s equity on each trade), this, assuming back-to-back losses, translates to a 4% loss, not including commissions.

Losing 4% in a session, particularly for new traders, is often overwhelming. This leaves the trader vulnerable to revenge trading, often driven by fear and frustration which can have devastating consequences. At this point, most traders lose stability of mind, encouraging unfavourable actions rather than following a proven trading plan.

A daily cut-off point of 4% helps circumvent further loss beyond this level, allowing the trader to collect their thoughts and return to an objective state of mind. Having the discipline to follow the cut-off limit, therefore, is vital.

Longer-term cut-off points largely apply to swing and position traders. Swing trading positions are usually held a few days to a couple of weeks, but are sometimes held longer. Position trading involves holding a position for several weeks and occasionally months at a time. This is investing, rather than trading.

An overall cut-off point determines the risk tolerance for the account. With this parameter in place, it helps avoid totalling an account. An example could be 20% of the account’s equity. This, in terms of a 4% daily cut-off point, assuming 2% risk on each trade, equates to ten consecutive losing trades. There are not many traders who can stomach ten back-to-back losses. One of the greatest problems we face as traders is one seldom discussed: our emotional responses to loss. A big loss, or accumulated losses, cause a number of inner conflicts, including a need for revenge, fear, anger and frustration – trading with a clear head is almost impossible.

While cut-off points can help protect from devouring an account, it can also help avoid greed. Using cut-off points as a strategy to plan for gains is also something traders may want to consider. Greed, like fear, is a natural human emotion that affects individuals to varying degrees.

Greed is frequently described as an intense desire for something and often manifests as a powerful craving for wealth. This can easily get out of hand when the market moves against traders but is equally likely to negatively influence trading decisions on winning trades.

Examples of greed in trading are doubling down on losing trades – in investing parlance, this means increasing the position despite a large unrealised loss – and over leveraging, which is simply entering a larger risk profile than the trading plan allows for.

Don’t be that trader without a plan

Losses will happen. Risk is an important factor in the trading industry and it is unfortunately so often overlooked. Don’t be one of those traders. Without capital you have zero skin in the game.

Having a defined cut-off point should form part of the overall trading plan, your own personal decision-making tool – there to help you decide what, when and how much to trade. Some other things to include in the trading plan are a defined risk profile and money management.