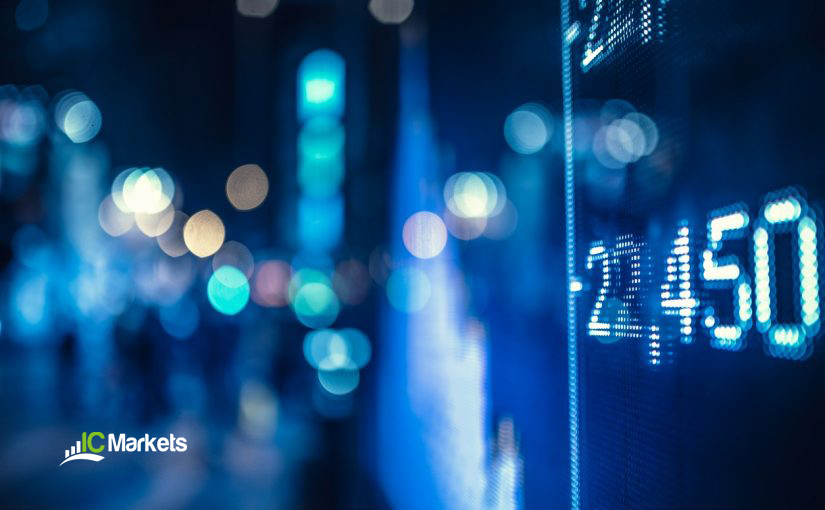 Fascinating as it is, the theory is a broad and complex topic within the field of technical analysis, invariably taking practitioners years to master. Despite its complexity, though, the foundations of Elliott wave theory are easy to understand and apply, and therefore could be incorporated almost immediately.

The basic wave principle (or pattern) involves a five-wave count and forms as market prices travel up or down.

The overall pattern forms an uninterrupted configuration in that the end of one wave marks the beginning of another wave (figure 1.1). 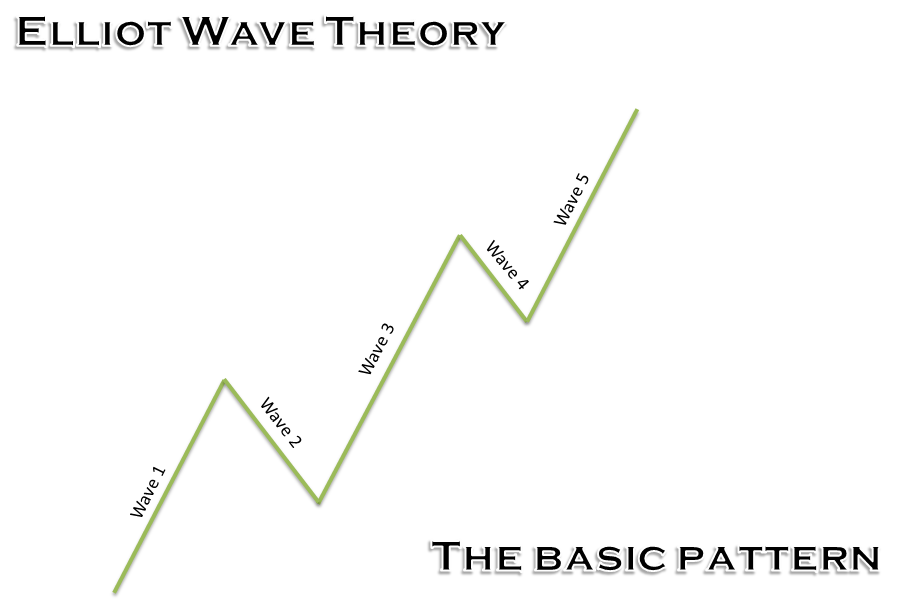 The five-wave sequence, labelled 1-5, is a complete motive wave – it propels the market in the direction of the primary trend. Sub waves 1, 3 and 5 are also labelled motive waves, while sub waves 2 and 4 are corrective waves as they interrupt the main trend.

After a five wave sequence completes, the corrective wave begins. The corrective wave partially retraces the movement developed by the motive wave. It follows a three-wave arrangement, or a combination of three-wave structures (combinations are best suited for another article), and is labelled using letters (figure 1.2). 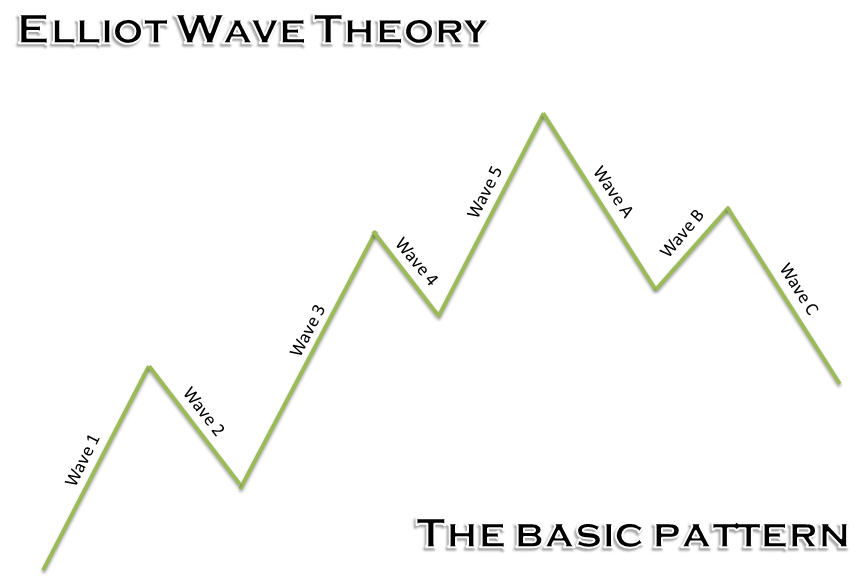 Another consideration is fractals (timeframes): the ability for trends and patterns to act similarly over different periods. Essentially all waves are part of other waves at a greater degree and are also divisible into waves at a lesser degree. 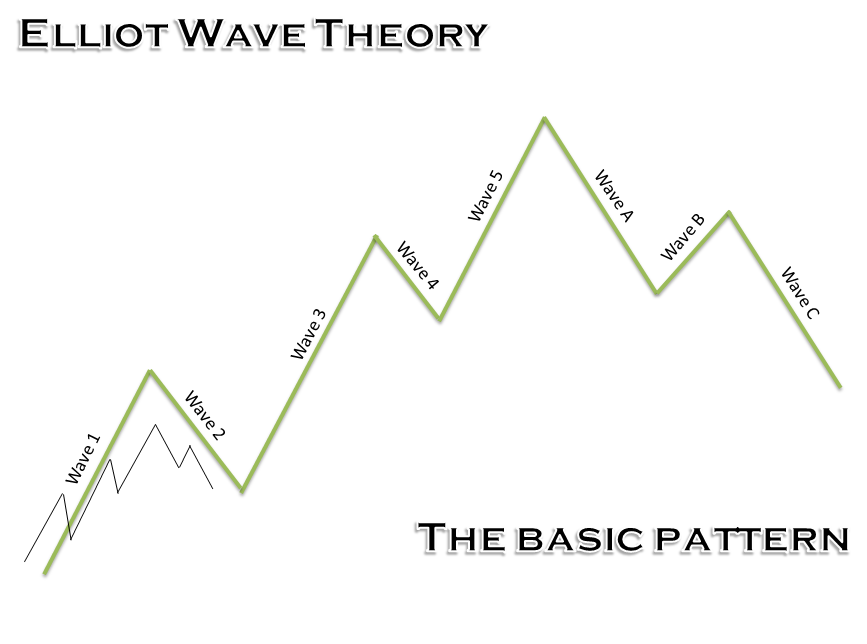 There are two types of motive waves: impulse and diagonal. 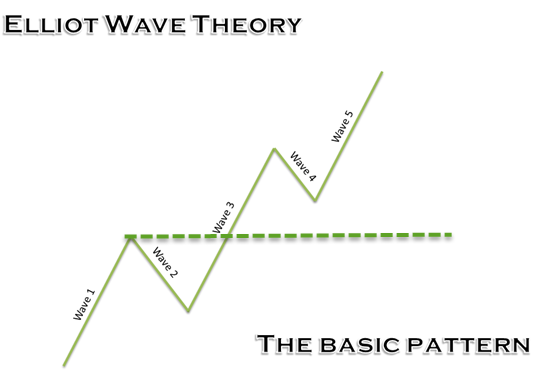 The diagonal wave, although still a motive wave, differs from impulse waves.

The first two rules of an impulse wave applies to a diagonal wave sequence, but rule 3 (wave 4 can never enter the price territory of wave 1) is not followed. Wave 4 frequently penetrates wave 1.

An ending diagonal occurs in wave 5 of an impulse wave, or the last wave of a corrective pattern: wave C of zigzag or flat patterns. The ending diagonal often develops when the preceding trend has run out of steam. 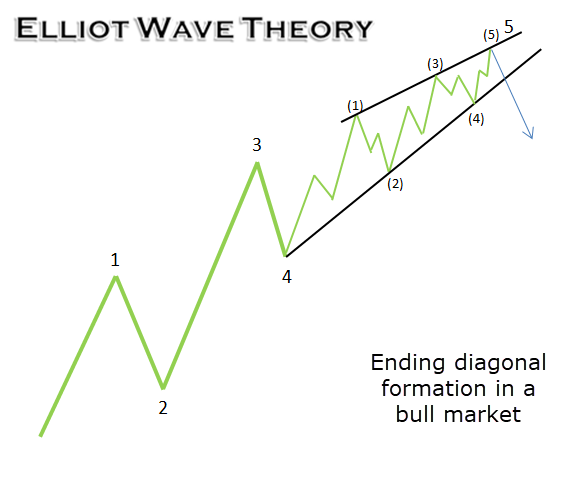 In a leading diagonal formation (figure 1.6), waves 1, 3 and 5 are either all impulse waves or all correction waves in the form of zigzags. Waves 2 and 4 are always zigzag patterns. A leading diagonal can form wave 1 of an impulse wave and the first wave of a zigzag, labelled wave A in a corrective pattern. 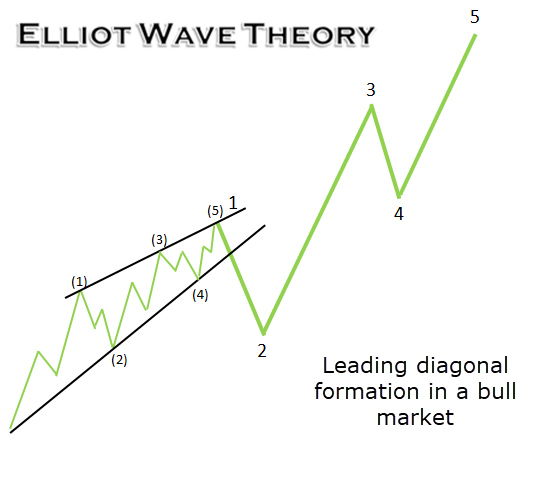 Extension is also an important aspect to be aware of. In an impulse wave, usually one of the motive waves, often waves 3 or 5, is extended or elongated.

Rarely do two motive waves extend, though it does happen.

Zigzags appear in the construction of many of the Elliott wave patterns. Figure 1.7 displays a zigzag corrective wave. 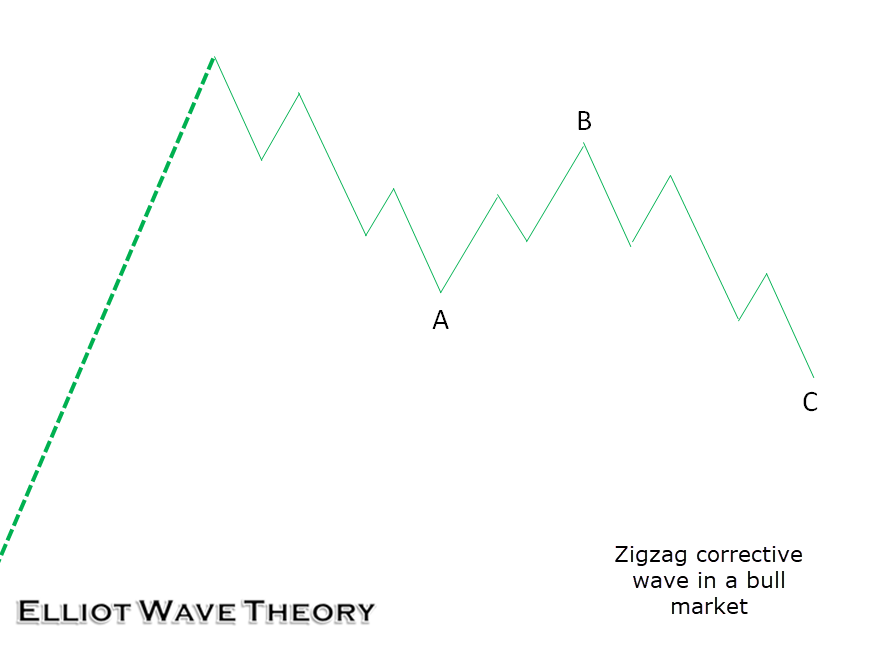 Wave B can never retrace beyond the beginning of wave A, and wave C should always travel beyond wave A’s end. Should wave C fail to push past wave A, a truncated wave emerges. A truncation occurs if wave 5 (in an impulse wave) fails to terminate beyond the end of wave 3.

Flat, labelled A-B-C, is also a three-wave corrective pattern present in the markets. Wave C is always a motive wave (impulse or an ending diagonal) and waves A and B are always corrective waves. Therefore, the flat is a 3-3-5 structure.

There are three types of flats: regular, expanded and running: 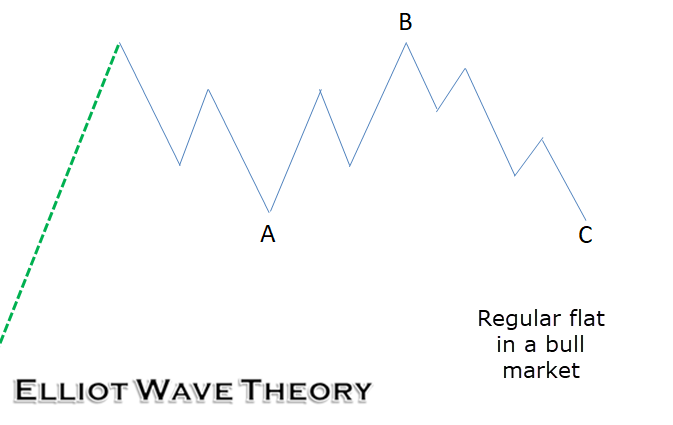 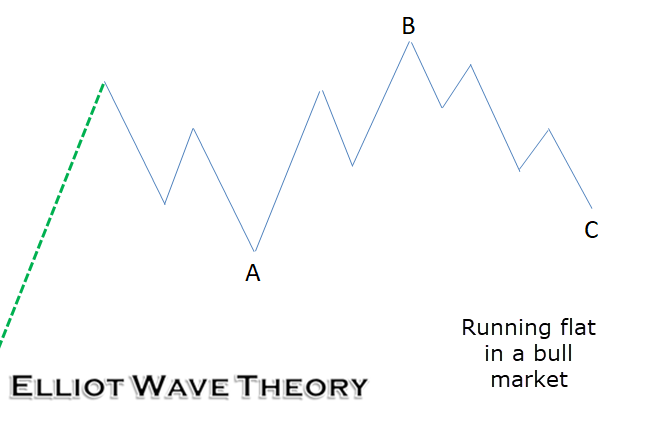 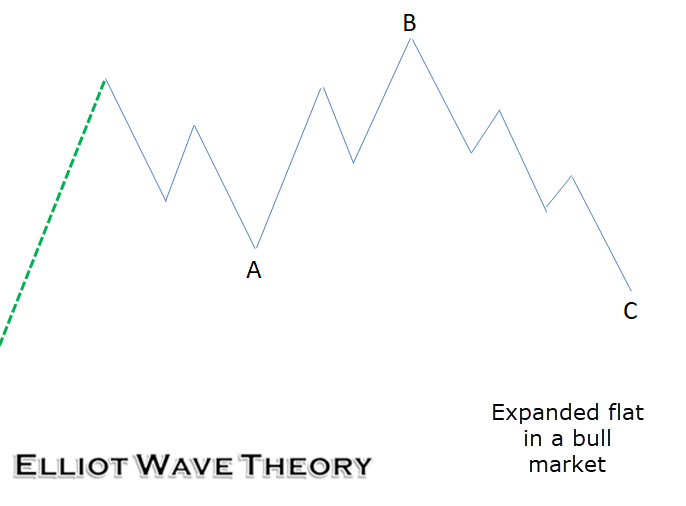 Triangle is a corrective wave that houses sub waves A-B-C-D-E. In the majority of cases, all sub waves within a triangle structure are zigzag patterns. Triangles are, therefore, labelled as 3-3-3-3-3 structures. You may sometimes find one of the sub waves forms another triangle, typically found at waves C, D or E (only one of these sub waves should exhibit complexity, though). 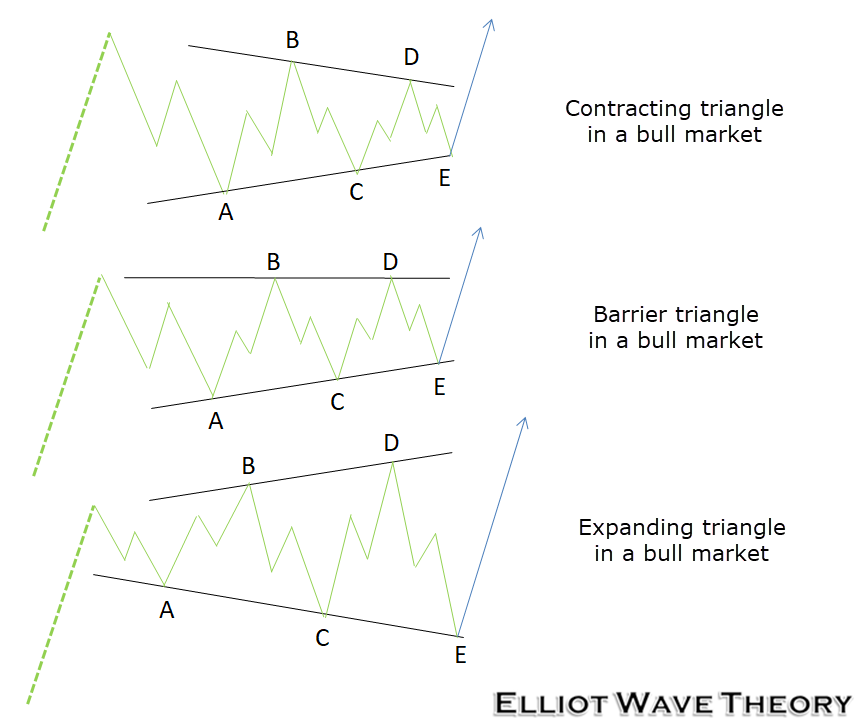 Regarding an expanding triangle, following the completion of wave A, each subsequent wave extends beyond the beginning point of the preceding wave.

Elliot wave analysis also adopts key Fibonacci relationships. This can become somewhat complicated, particularly for newer traders. For that reason, the following will demonstrate only a foundational view for the purpose of this article.

This, alongside other corrective formations (above), helps formulate a ‘termination point’ in which price action should halt. 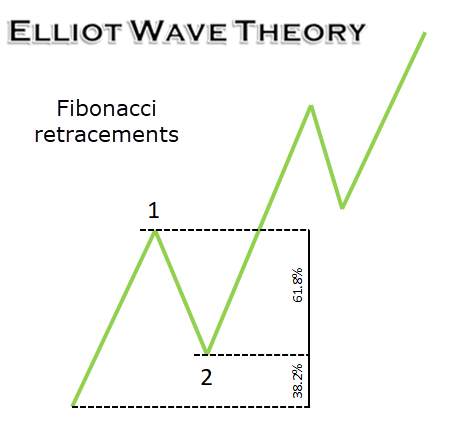 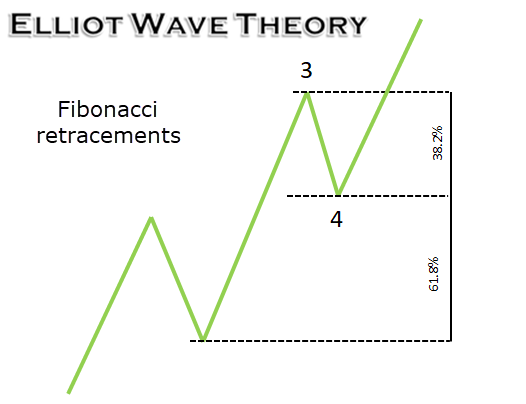 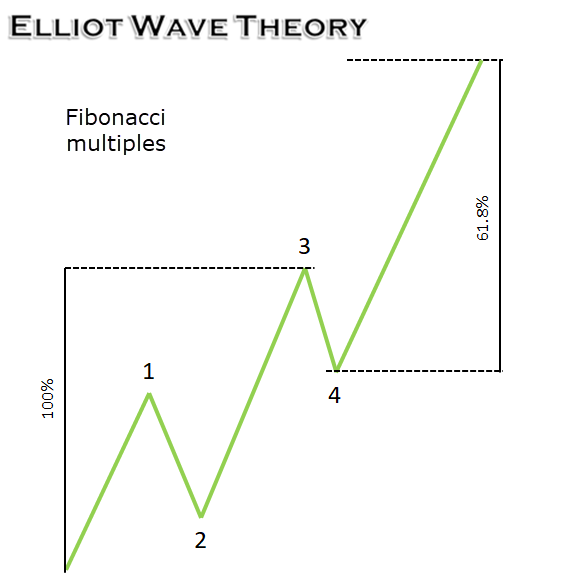 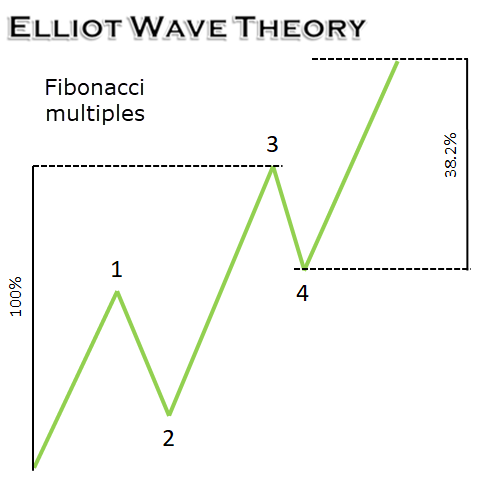 If wave 3 is elongated, traders can expect waves 1 and 5 to be of equal length. A wave 5 extension, however, can travel 1.618 times the net distance travelled of waves 1 through to 3 (figure 1.16). 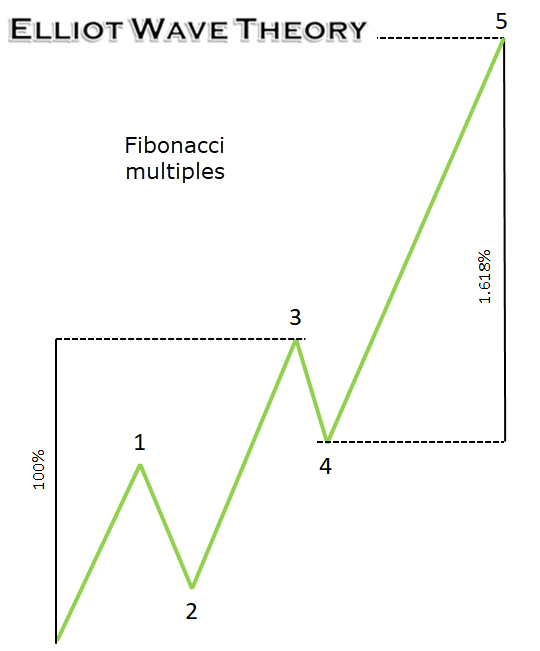 In the event wave 1 extends, traders should look for the distance of waves 3 through to 5 to equal 61.8% of the length of wave 1.

An established way to trade

Although the article barely scratches the surface in terms of Elliot wave analysis, it does provide a foundation to build upon.

Successful traders around the world adopt Elliot wave analysis and many indicate consistency using this trading strategy. It will, nonetheless, take time to pin down the theory’s subtle nuances and understand how to best apply it to the market that fits with your personality and trading style, though it is time well spent.