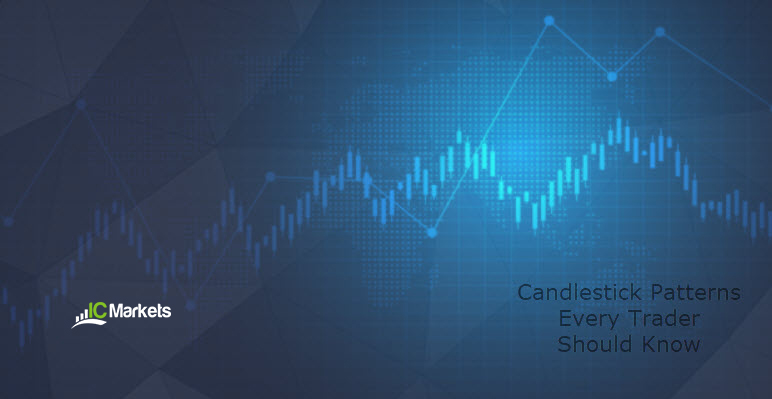 Traders and investors who adopt technical analysis typically use price charts to identify market behaviour. For that reason, before learning anything else, it is vital to understand the basics of each widely used chart (see figure 1.1 for a visual representation):

Knowing the framework of a candlestick is essential in order to identify profitable patterns. 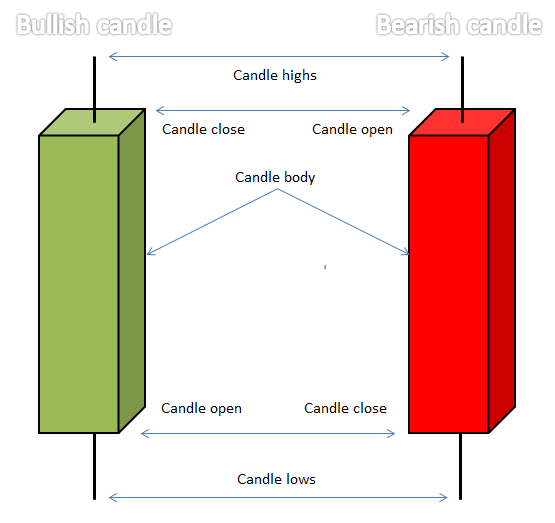 Used extensively throughout the trading community, each candle delivers a story.

The central portion of a candlestick – that is between the candle open and the close – is known as the real body or candle body. Candlesticks generally implement a colour-coded system to signify direction, enabling traders to quickly decipher whether price is rising or falling.

A green body emphasises a bullish (buying) tone, whilst its red counterpart demonstrates a bearish (selling) presence. The closing price in a bullish setting adds significance in that it determines overall buyer conviction during the candle period. Generally speaking, the longer the body is, the more intense the buying pressure was.

Historically, candlestick charts established a presence in the 18th century by Munehisa Homma, a Japanese rice trader of financial instruments. In December 1989, Steve Nison – known worldwide as the father of modern candlestick charting – wrote an introductory article on Japanese candlesticks. It turned out he was one of the few Americans familiar with this centuries-old Japanese technique. Since then, Japanese candlestick patterns have become a staple in many trading methodologies throughout the western world.

Candlestick structure is popular among technical analysts due to its striking representation of price action. The analytical difference between Japanese candlestick patterns and western bar patterns is the emphasis on the opening and close.

Another point worth highlighting is most candlestick patterns are either top of bottom formations. The analyst, therefore, must ensure preceding price action is in a defined trend.

The hammer and inverted hammer:

Both the hammer and inverted hammer patterns are identical formations, with the only difference being they are an opposite mirror image of one another. 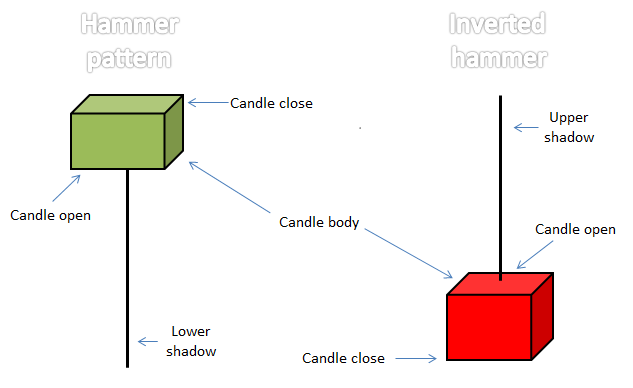 Each should house an  upper/lower shadow at least two to three times the length of the candle body. The colour of the body is irrelevant, though traders must ensure the candle close is, or nearly is, the highest/lowest price. In other words, look for the  candle to close either at its highs or lows.

The hammer and inverted hammer formations are bullish reversal patterns, mainly occurring at the bottom of downtrends or at troughs. After a downtrend, the two patterns can signal a downtrend’s end might be in store.

The hanging man and shooting star:

The hanging man and shooting star patterns are a mirror image of the hammer and inverted hammer formations, respectively. The only difference is the name and the location of the pattern.

A bearish or bullish engulfing pattern is a two-candle formation in which the second body engulfs the first. 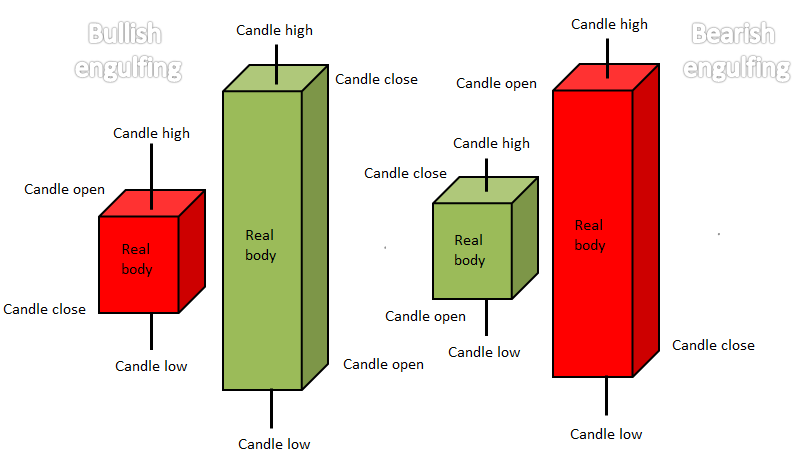 Because this pattern is there to recognise a trend reversal, a clear trend must precede its formation. In a market uptrend, for example, a bearish engulfing pattern indicates a possible top. The bearish engulfing structure consists of a small green candle (or whichever colour scale you choose to represent a bullish move), followed by a red candle that engulfs the green body. Traders should look for the engulfing candle to immerse the entire range of its previous candle.

The Doji pattern is a commonly found candlestick arrangement. Its shape is typically small in length (small trading range) with an 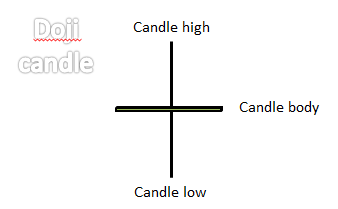 opening and closing price that are virtually equal. On its own, it is a neutral candle and suggests the market is in equilibrium and affected by indecision. Although some candlestick traders will disagree, the creation of a Doji tells traders it is often best to hit the side lines until renewed direction is visible.

Traders may also want to note long-legged Doji formations can also occur – the upper and lower shadows are elongated. This means the market entered a phase of indecision, usually after a huge expansion in volatility.

Now you have a good idea how to identify some of the most popular candlestick patterns, how do we trade them?

To use these patterns successfully, a trader must familiarise themselves with the underlying trend and additional technical indicators. Although a number of techniques employing candlestick configurations are available across the internet, and through various training programmes, simplicity is key to success.

Among the technical community, candlestick signals are often employed as a means of confirmation. As an example, check out figure 1.2, the M15 EUR/USD chart. Two clean layers of resistance-turned support levels come together to form a tight buy zone (yellow). The initial test of the area formed a half-hearted hammer pattern (blue arrow – the real body of the candle was large in comparison to its lower shadow). Stronger confirmation emerged shortly after in the shape of an inverted hammer pattern (pink arrow).

Entering long after the formation of the inverted hammer configuration, in this case, offered incredibly attractive risk/reward.

Another example where candlestick confirmation is used can be found at key Fibonacci levels. Although the 50.0% value at 1.1141 is not technically a Fibonacci ratio, the 38.2% line is, which is also found at 1.1141. Note price action in figure 1.3 bounces off 1.1141 to the point and begins bottoming. Only after the inverted hammer formation highlighted above in figure 1.6 develops, do we have confirmation to go higher.

One final point worth highlighting is to always wait for the confirming candlestick formation to close. Trying to interpret how a candle will close is difficult, as financial markets can move a number of points in the space of seconds.

Having a means of confirming an area of interest is exceedingly beneficial. Japanese candlesticks offer accurate confirmation signals and provide traders entry and risk levels to work with.

For traders looking to enhance their understanding of candlestick chart patterns, the best resource on Japanese candlestick analysis is Steve Nison’s book: Japanese Candlestick Charting Techniques: A Contemporary Guide to the Ancient Investment Techniques of the Far East.