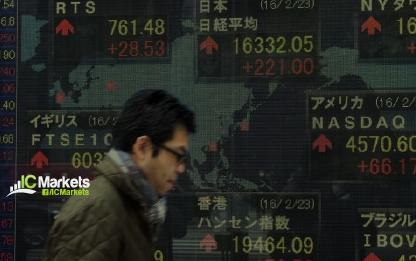 Asian markets clawed back some of their earlier losses in afternoon trade on Friday. China’s stocks turned positive after dipping about 2% earlier in the day as U.S. stocks tumbled for a second day. Media reports indicated that the U.S. Treasury Department has not labelled China as a currency manipulator in an internal report.

Overnight, U.S. stocks extended losses to post their worst two-day stretch in eight months. The biggest market shakeout since February has been blamed on a series of factors, including worries about the impact of a Sino-U.S. trade war, a spike in U.S. bond yields this week and caution ahead of earnings seasons.

China’s Shanghai Composite and the Shenzhen Component opened lower but rebounded 0.5% and 0.2%. Hong Kong’s Hang Seng Index also traded 1.5% higher. Official data revealed on Friday that China’s trade surplus with the U.S. rose to CNY 213.23 billion in September, compared with markets’ estimates of CNY 136.2 billion. Exports in dollar terms rose 14.5% in September compared to the same period last year, according to the data, higher than the forecast of 8.2%. Imports climbed 14.3%.

Japan’s Nikkei 225 gained 0.6% and the South Korea’s KOSPI rose 1.5%. The Australian market has pared initial losses and is now modestly higher, as weakness in banks and oil stocks were almost offset by gains in mining stocks.

Gold , typically seen as a safe-haven asset at times of high uncertainty, held steady on Friday. The yield on 10-year U.S. notes edged up 3.6 basis points in Asia to 3.167 percent. It is still off its seven-year high of 3.261 percent touched on Tuesday, but a further rise in the U.S. borrowing costs could hurt risk sentiment.